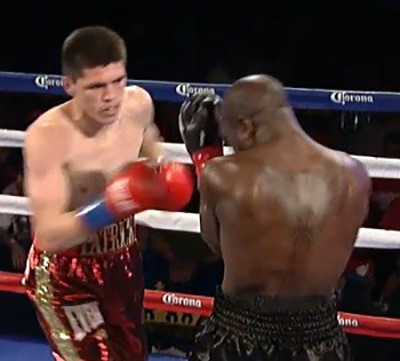 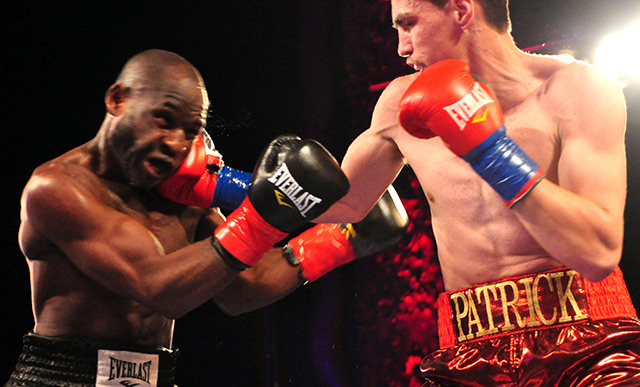 The following press release was issued Friday evening by Golden Boy Promotions, which promotes the monthly LA Fight Club series. The latest show, which took place on Friday (Oct. 2) at the Belasco Theater in downtown Los Angeles, was headlined by 24-year-old Brazilian middleweight prospect Patrick Teixeira (26-0, 22 KOs), who stopped rugged gatekeeper Don Mouton (13-10-1, 11 KOs) in the seventh round of their scheduled 10-round bout.

The Teixeira vs. Mouton battle thrilled the crowd, ending the card in an explosive crescendo. Teixeira dominated the early exchanges, landing hard power shots to the head and body of Mouton. Mouton weathered the storm and fought back landing shots to stun Teixeira in the 6th round. Teixeira showed his championship quality by recovering and landing a barrage of punches in the 7th round. With Mouton unable to defend himself, the ref stopped the fight. Teixeira remained undefeated with the technical knockout victory.
“I’m happy to have put on a great show here in the Belasco. I have a lot of respect for Mouton and his toughness,” said Teixeira.
“I have to give it to him. He has great rhythm and a strong punch. I felt I really hurt him and wanted to finish the fight, but he held and I wasn’t able to close. I have a lot of respect for him and was happy the fans liked the show we put on,” said Mouton. 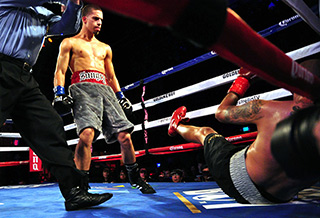 In the co-main event of the evening, Golden Boy Promotions fighter Zachary “Zungry” Ochoa (13-0, 6 KOs) faced the tough Alejandro Rodriguez (24-19-1, 14 KOs) of Guadalajara, Mexico in a scheduled eight-round welterweight bout. Ochoa showed great speed early on, landing sharp combinations on Rodriguez. In the second round, Ochoa managed to drop Rodriguez. Rodriguez made it out of the round but was not able to survive the attack of Ochoa in the beginning of the third. Ochoa blitzed Rodriguez knocking him down twice and forcing the ref to call a halt to the bout giving Ochoa another victory by way of technical knockout.
“I felt really good about the fight. I was able to stay calm and not let Rodriguez get too comfortable. He is a veteran, and I think winning this fight proves to me and my trainer where I am and where I’m going as a fighter,” said Ochoa.
In the first televised bout of the evening on Boxeo Estelar on Estrella TV, both fighters showed skill and tremendous will in the ring as Antonio Gutierrez (19-1-1, 8 KOs) of Tijuana, Mexico took on Victor Fonseca (9-6-1, 7 KOs) in a six-round middleweight bout. Gutierrez boxed well in the early rounds, but as the fight went on, Fonseca started to lure Gutierrez into exchanges leading to fireworks down the stretch of the bout. The two fighters battled to the last second where Gutierrez earned a unanimous decision victory
“I felt good and was glad to put on a good show for the crowd. I prepared for three months for this fight and I think it really showed.” said Gutierrez.
As part of The Ring TV’s live stream, Francisco Ochoa (3-0, 2 KO) took on Isaac Avalos (0-1)of Tijuana, Mexico who made his pro-debut, in a four-round lightweight bout. The fight picked up the tempo of the last bout as both men came out aggressively. Ochoa landed a crippling body shot in the first round ending Avalos’ night early and earning himself a technical knockout win.
“I felt nervous at first but started to relax after I landed some hard punches. I think I performed well and hope to stay busy and keep up the momentum,” said Ochoa.
Los Angeles prospect Pablo Rubio Jr. (3-0, 3 KOs) held onto his undefeated status with a win over Adrian Rodriguez (1-8-1) of Guadalajara, Mexico in a four-round super bantamweight fight also part of The Ring TV’s live stream. The action packed bout featured fiery exchanges with both men landing hard shots. The fight went to the judges scorecards where Rubio Jr. earned a hard-fought majority decision.
“This was a difficult fight. He kept coming and made it rough, but I was able to land good shots and get the win. I’m looking to keep working and improving every fight.” said Rubio Jr.
In the second fight of the evening, rising prospect Joshua Franco (2-0, 1 KO)faced off against Saul Hernandez (5-8-1 3 KOs) of Tijuana, Mexico. Hernandez fought hard early, showcasing his aggression and solid defense, however Franco began to dominate the exchanges with his power finishing Hernandez in the third round, earning a technical knockout victory to remain unbeaten.
“I felt great tonight. Our strategy was to break him down and finish him with body shots. After the first round I could feel him getting weaker. It was great to hear the crowd tonight and I look forward to being back soon,” said Franco.
Opening up The Ring TV’s live stream, Abraham Lopez (2-1, 1 KO) of Rowland Heights, California battled Andrew Gomez (0-3) of Mission, Texas in a four-round super lightweight battle. Thrilling the crowd from the start, the two fighters traded shots back and forth. Lopez took control of the first round and in the second round knocked down Gomez, leaving him visibly shaken. Gomez answered the ref’s count but was shaky on his legs forcing the ref to call the fight, giving Lopez a technical knock out victory.
“I came out aggressive and landed some hard shots. In the second round I felt more relaxed and that allowed me to land that hook. I’m really happy with tonight and hope to continue showing everyone who I am and what I’m about,” said Lopez.
LA FIGHT CLUB: Teixeira vs. Mouton was a 10-round middleweight bout presented by Golden Boy Promotions and sponsored by Corona Extra. Doors opened at 5:00 p.m. and the first bout began at 5:30 p.m. The Estrella TV broadcast aired live on Friday, October 2nd at 10:00 p.m. ET/7:00 p.m. PT, and The Ring TV undercard live stream began at 8:30 p.m. ET/ 5:30 p.m. PT.
The three co-main event bouts can be watched On Demand on www.Ring TVLive.com.
LA FIGHT CLUB is a monthly boxing series featured on the first Friday of each month, with upcoming shows on Nov. 6 and Dec. 4. The series showcases the brightest stars in the sport and present these exciting matchups in a nightclub atmosphere with an original setup. The boxing ring is set on the main floor of the Belasco Theater with on-camera standing room for fans in front of the ring similar to a concert pit, as well as reserved balcony and floor seats. Los Angeles’ own DJ Ray of Big Boy’s Neighborhood spins music during the fights and fans are able to dance and mingle with the fighters when the venue converts into a night club, in a VIP experience not matched by any promoter in the industry.