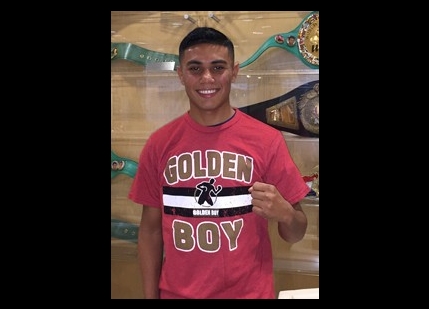 Best night of pro career: Sanchez beat the seasoned Jose Cen Torres in his first six-round fight last time out. He feels this was most impressive display to date.

“I fought a guy with a lot of experience and I learned a few things. I paced myself, picked my punches.” Sanchez told RingTV.com last week.
Worst night of pro career: Although Sanchez has won all eight contests so far, he was less than impressive when he beat Eliezer Agosto.
“There was one fight in May,” he said. “I stayed on the ropes a little too long, when I could have been moving.”

Next fight: He faces battle-tested Juan Sandoval at the Belasco Theater in Los Angeles on Friday.
“I think it’s gonna be a good fight,” the 21-year-old said. “If it goes the distance, I’ll be ready for it. I’ve been training hard.”
Although Sandoval’s record is a modest 7-16-1 (4), he’s only been stopped once and is expected to give Sanchez rounds. The 28-year-old has previously gone the distance with the likes of Francisco Vargas, Julian Ramirez and Mario Barrios.

Why he’s a prospect: The youngster managed to fit a lot into his 75 amateur bouts. Sanchez won the US Junior National Championship in Denver in 2009 and fought at the 2011 Golden Gloves.
He tried to make the 2012 US Olympic team, beating Adam Lopez, Stephen Young and Oscar Cantu before losing to Shawn Simpson.
Sanchez has gained valuable experience sparring with former three-division world champion Abner Mares, former IBF featherweight titlist Evgeny Gradovich and hot prospect Oscar Valdez.
When asked what he feels his biggest strength inside a ring is, he simply says: “My pressure, I’m a pressure fighter.”
Why he’s a suspect: Sanchez feels he gets hit more than he’d like and needs to move his head more. He’s also needs to use his boxing skills more and not get lured into a war with his opponents.
He has had spells of inactivity during his career; hopefully now that he has signed with Golden Boy Promotions and is appearing on their shows at the Belasco, that will not be the case anymore.
Story lines: Sanchez was born and raised in Pacoima, a neighborhood in the San Fernando Valley in Los Angeles and comes from Mexican heritage.
“Living here [in Pacoima] was cool,” he said. “I had a lot of friends but it was hard living there. There were a lot of gangs.”
He became interested in boxing at 12 years old because when football season was over, he was looking for something to keep him active and chose boxing. Sanchez fell in love with the sport. He lists Mike Tyson as his boxing hero and wants to win world titles in multiple weight classes.
His younger brother, Saul, is also a boxer and will make his debut soon at 118 pounds.
Away from boxing, his life is simple. Sanchez says he enjoys spending time with family and playing football.
Fight-by-Fight Record
2013 Jan. 30 – Luis Alfredo Rodriguez – KO 1
Feb. 16 – Ivan Diaz – TKO 1
July 12 – Lyonell Kelly – KO 1