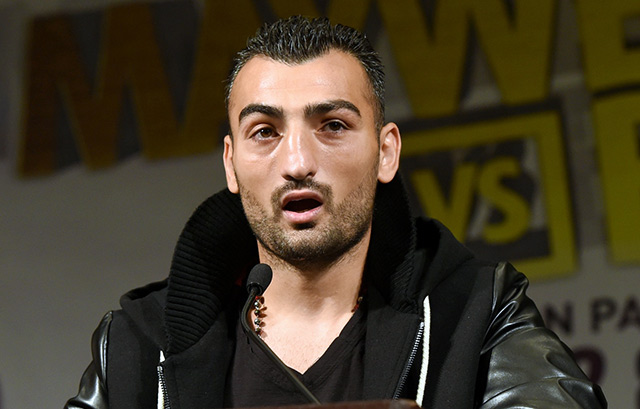 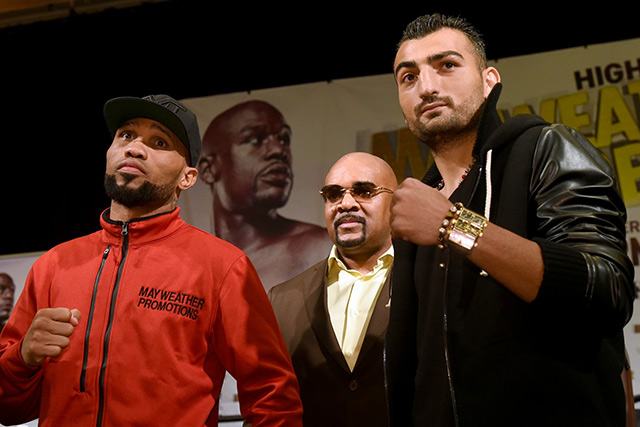 Tonight’s Floyd Mayweather Jr.-Andre Berto showdown has been a tough sell for fight fans who hoped that Mayweather would have picked a more challenging opponent for what he is stating will be his final boxing match. Reports have flooded the web suggesting that there is a lack of public interest that has translated into a large number of tickets still being available and a significantly low PPV buy rate.

But before the pay per view airs, a pair of fighters will make a last ditch effort to convince any fight fans who are on the fence to purchase the event.

Mayweather Promotions’ Ishe Smith (27-7, 12 knockouts) and Vanes Martirosyan (35-2-1, 21 KOs) will square off in a junior middleweight clash on Showtime in a fight that is significant to both fighters and their respective futures. Smith is coming off a unanimous decision victory against Cecil McCalla back in April and is 2-2 in his last four fights with losses against Erislandy Lara and Carlos Molina.

As for Martirosyan, he’s dropped two of his last three fights to Demetrius Andrade and Jermell Charlo after starting his career with a 33-0-1 record. Both say they are hungry and need the victory on a huge stage. But Martirosyan didn’t even think about the fact that they are leading in the PPV until RingTV.com mentioned it to him this week.

“I haven’t even thought about that, but now that you told me I have to put in the work to make us look good,” the 29-year-old contender said. Martirosyan is aware that Smith isn’t known for putting on the most fan friendly performances but believes that he’ll bring out the best in Sugar Shay on Saturday night. Either that, or he’s just going to have to knock him out.

“I don’t think this will be boring at all,” the former 2004 U.S. Olympian said. “I think he’s hungry so both of us are going to come out and make this exciting. I think we’re going to set the stage high and after watching us people who aren’t sure will order the pay per view.”

There’s certainly a clash of styles that could potentially serve up a dull fight but Martirosyan remains adamant that he’s going to be aggressive and force Smith to fight him.

With a common opponent in Erislandy Lara – who Smith lost handily to while Martirosyan fought to a technical draw after a clash of heads ended the night prematurely – the Nightmare says that fans shouldn’t look too closely into that fight to determine a winner.

“Styles make fights and Lara did that Cuban boxing whenever Ishe got in close because didn’t want to engage,” Martirosyan said of the differences between how he and Lara handled the Cuban. While Smith was nearly shutout, Martirosyan used his aggressiveness to his advantage to snare away enough rounds to win the fight on one judges’ scorecard. “When I fought Lara I was just looking to attack his ass and trying to get after him. I wasn’t sure if or when he’d start moving around. You do take some things away from that but not much because I haven’t watched a lot of tape to study Smith.”

In the end, Martirosyan says he has already visualized multiple ways of beating Smith and hopes the victory will catapult him to greater things after Saturday night.