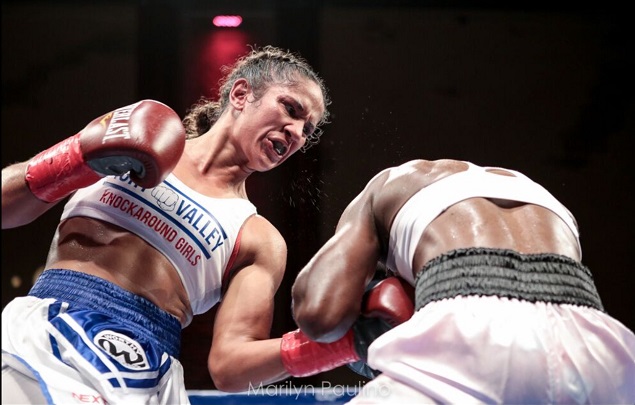 Amanda Serrano (left) lands a left to the body of Fatuma Zarika on Sept. 10, 2015 in Westbury, NY. Photo by Marilyn Paulino

Sept. 10, 2015 – Long Island, New York – The ladies proved to bring the most action on Thursday night at the Space at Westbury, a music venue in a suburb of New York City. Former two-division women’s titleholder Amanda Serrano (25-1-1, 18 knockouts) defeated Kenyan-born Fatuma Zarika (24-12-2, 14 KOs) by six-round, unanimous decision for the second consecutive time. Two fight’s prior to that first bout, Zarika and Serrano’s older sister Cindy fought to a grueling draw in which both women were hurt.

In a further attempt to extract revenge, the younger Serrano belted Zarika for six rounds to win in even more convincing fashion than their first bout in Memphis, Tenn.. The official scores tonight were 60-55, 59-55 and 58-56.

Serrano came out of her corner in the first round to land big combinations to the delight of the hometown crowd, who came out during a rainstorm to cheer Serrano on. Both women fought in a proverbial phone booth from the second round on, each landing clean shots on the other. Serrano controlled the action and kept Zarika on the ropes and off balance. Although it was evident to the crowd who the won the bout, both women were paraded around the ring on the shoulders of their respective cornermen while the crowd gave them both a standing ovation. 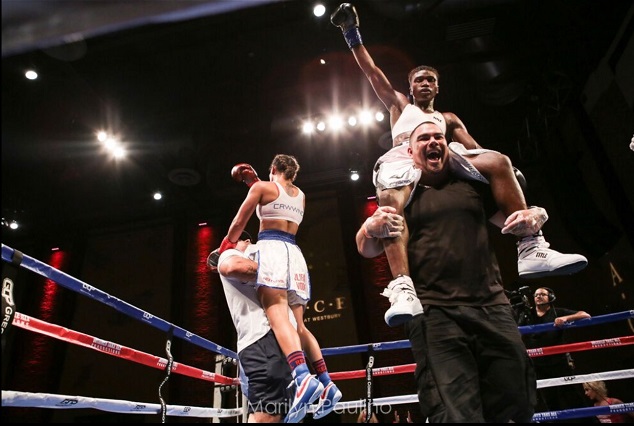 In the evening’s co-feature, Long Island’s own Tommy Rainone improved his record to 24-6-1, 5 KOs with a unanimous decision victory over Francisco Javier Reza (15-15, 12 KOs). The official scores were 60-54 across the board. 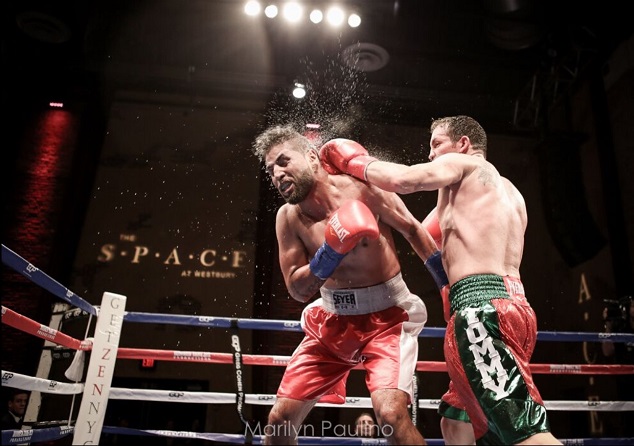 After a clash of heads in the second round opened a cut beneath his eye, Rainone came forward with a sense of urgency to thoroughly dominate Reza with a series of straight left crosses, landing at will. Rainone looked sharp as he had Reza in serious trouble in the final round, causing referee Arthur Mercante Jr. to take a long look at possibly stopping the fight before Rainone seemed to tire himself out just as the bout came to an end. Prior to that, Rainone landed a half-dozen unanswered clean shots.

Jesus Gutierrez (14-0-1, 4 KOs) remained undefeated by outslugging the crafty Roberto Acevedo (13-15-3, 1 KO) and winning a unanimous decision. The official scores were 60-54 across the board. Gutierrez is promoted by Zab Judah, who was to be part of the original main event of the evening’s card. Unfortunately a pre-weigh-in dust up with his opponent, Hevinson Herrera, led to the bout being canceled.

Gutierrez withstood Acevedo’s roughhousing, which included using his elbows and head to pound on Gutierrez’s body, to win every round on all of the judges’ scorecards.

Light heavyweight Steve Geffrard (13-2, 8 KOs) battered Cory Cummings (18-10-1, 13 KOs) en route to a fifth round TKO victory. The official time of the stoppage was 1:53. Geffrard, trained by John David Jackson, overwhelmed Cummings all night and had him hurt in the opening round and again in the fifth round with an uppercut before the referee decided Cummings had enough.

In the opening bout of the evening Victor Vasquez (4-1, 2 KOs) stunned Bienvenido Diaz (2-1, 2 KOs) and scored a third round TKO victory. The official time of the stoppage was 2:21.

Diaz did not have an answer for Vasquez’s lightning-quick hand speed. Vasquez landed first and did not give Diaz a chance to get into position for a counter.

Judah was in attendance to cheer on his fighter, Gutierrez, and to meet with fans hoping to see him headline the card. Although disappointed that the bout was canceled, Judah believes his opponent was looking for a way out.

“This fight was given as an opportunity for a young fighter to fight one of the best pound-for-pound fighters and, instead of saying he wasn’t ready, he just decided to start a hostile situation,” said Judah of what caused the altercation between himself and Herrera. “He was speaking Spanish and I’m married to a Puerto Rican woman, so I know what he was saying.”

Judah went on to say he will fight in October against an opponent to be determined.