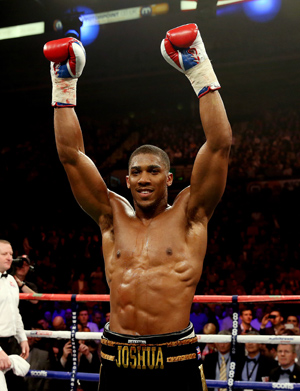 British heavyweight star Anthony Joshua weighed 249 pounds on Friday for his Commonwealth title bout against Gary Cornish, who weighed a colossal 256 pounds. The bout, which takes place on Saturday, will be held at the O2 in London, England.

Joshua, an Olympic gold medalist at London 2012, is 13-0 (13 knockouts) and undoubtedly one of the hottest prospects in world boxing. The majority of his stoppages have been utterly devastating and although it remains to be seen if he can absorb a direct hit, there are many who see him as the future of the division.

Cornish, who is also unbeaten at 21-0 (12 KOs), will present a big challenge at least in terms of dimensions. On paper, the Scotsman has a one inch height advantage to go along with his seven pound weight edge, but he is not a puncher and enters this bout as a prohibitive underdog.

If Joshua and fellow Englishman Dillian Whyte prevail on Saturday then the pair will likely collide later in the year. Whyte faces American Brian Minto on the same card.