Lucas Browne to be trained by Benn and Williams 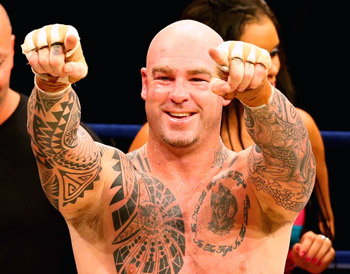 Williams has trained some of Australia’s best upcoming talents in recent years while Benn really needs no introduction to fight fans across the world.

Nicknamed ‘The Dark Destroyer’, Benn was one of the world’s most feared middleweight and super-middleweights in the late 1980s and early to mid-1990s.

Famed for his all-action style, the Londoner was a devastating puncher and won the WBO crown at middleweight by knocking out Doug DeWitt in 1990 before adding the WBC 168 pound title to his collection by halting Mauro Galvano two years later.

Benn is also a close friend of Ricky Hatton (Browne’s Promoter) and called “The Hitman” for his views before agreeing to train the heavy-hitting Aussie.

“Can Lucas become a champion? Absolutely!” Benn said. “He has the potential to go all the way.

“He is a big old boy; he can hit hard and has natural ability and talent. He has good movement and we would love to help him to do the things he hasn’t done before so he can walk through his opponents. I want him to do things that heavyweights can’t do.

“Lucas has a vision and I know Rodney and I can help him to achieve his goals. I believe Lucas Browne will become Australia’s first heavyweight champion of the world.”

Rodney Williams added: “Undoubtedly Lucas Browne can become the next heavyweight champ. I see the potential he has and I’m looking forward to working with him to use and abuse the athleticism of a man of his size.

“I relish the opportunity to help the man mountain make Australian boxing history.”

Information courtesy of a press release issued by Hatton Promotions