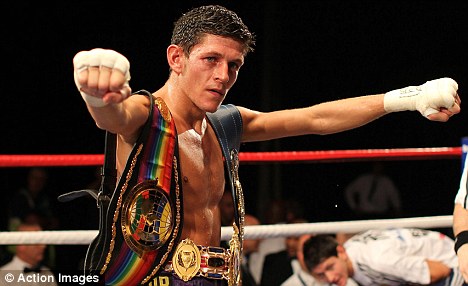 Meet THE RING No. 5-rated bantamweight Jamie McDonnell, who looks to repeat his sensational unanimous decision victory over Tomoki Kameda this Saturday in Corpus Christi, Texas, once again, as an underdog.

“I’m very confident that I’ll do it again,” said McDonnell who scored his biggest win in May. “I’ve been training with Dave [Coldwell] and we’ve been working on lots of new things coming into the rematch. I’m as fit as I’ve ever been, sharper than I’ve ever been and I’m out to prove a point.

“I don’t want to leave this one in the hands of the judges because I might not get the decision this time around. A stoppage would be great but a win is the number one priority and opens the door to bigger and better things.”

Despite coming out on top against Kameda in Hidalgo, Texas, McDonnell has had to travel yet again to face the most dangerous opponent of his career. That challenge does not deter the laid back 29-year-old, who is accustomed to taking things in his stride while notching solid results.

“We came out to Texas two weeks prior to the rematch and everything is fine,” said McDonnell who is unbeaten in seven-and-a-half years. “That’s plenty of time to adjust to the time difference and we also got some quality training done in the heat.

McDonnell (26-2-1, 12 knockouts) is managed and trained by British jack-of-all-trades Dave Coldwell. The affable 40-year-old is a former professional fighter who is widely respected in UK boxing circles and he claims to have his charge locked and loaded ahead of Saturday’s clash against the former WBO bantamweight titleholder.

“The sparring has been absolutely brilliant in the lead-up to this fight,” said Coldwell. “Ryan Burnett is very hard to tag cleanly, so Jamie has to work extra hard to land his shots. There has been definite improvement in his overall game and, now, it’s all about putting things together on the night.

In their first meeting, Kameda (31-1, 19 KOs) almost made mincemeat of McDonnell early. Late in Round 3, a dynamite right hand dropped the British technician on the seat of his pants and only a solid chin and a kind clock saved him from further punishment. McDonnell has no interest in reliving that memory.

He said, “We’ve been working on letting our shots go and getting back into a defensive position. There’s been a lot of defensive work in this camp because Kameda is dangerous with that big right hand and we don’t want to go there again.

“I’m really looking forward to this rematch, so that I can show people the improvements that have been made.”

McDonnell burst onto the world scene in May 2013 when he won the vacant IBF bantamweight title by outpointing then-unbeaten Julio Ceja. That win received little acclaim, at home or abroad, but Ceja’s impressive victory over Hugo Ruiz on Saturday only served to remind critics of McDonnell’s undoubted worth and talent.

“That was a great win for Ceja,” said McDonnell with admiration. “He got dropped but came back to win in style. There’s no secret to what Ceja does. He comes forward looking for the big shots but he’ll be due another world title fight after dealing with Ruiz like that.

McDonnell, at 5-foot-10, is obviously huge for a 118-pound fighter and there are rumors circulating that the Kameda rerun may be his final bantamweight venture. Fighter and trainer were unwilling to fully commit but, reading between the lines, a move north is imminent.

“If I beat Kameda, [WBA bantamweight titleholder] Juan Carlos Payano is my best option at bantamweight,” said McDonnell. “If that doesn’t come off, then I’ll move straight into the junior featherweight division and mix it with the big guns like [Scott] Quigg and [IBF titleholder Carl] Frampton.

“Any match-up that has a world title attached would interest me, although the money has to be right. I’m not scared to take on anyone at bantamweight or junior featherweight because these are all winnable fights for me. I just need to beat Kameda first to create that demand.”

Coldwell said, “It’s about how Jamie feels when he makes weight but, being honest, I don’t think he’ll be at 118 pounds for much longer. If he watches his weight, then he might have one more at bantamweight but we’ll see what happens.”

A dangerous and determined foe stands between Jamie McDonnell and another huge win. What surprises do the plucky Englishman have in store for all those who dare to write him off this time?

“I’m hoping that the shots we’ve been working on and the techniques we’ve been using can force a stoppage. Last time, I was just looking to land on Kameda. This time I’m looking to hurt him,” said McDonnell.