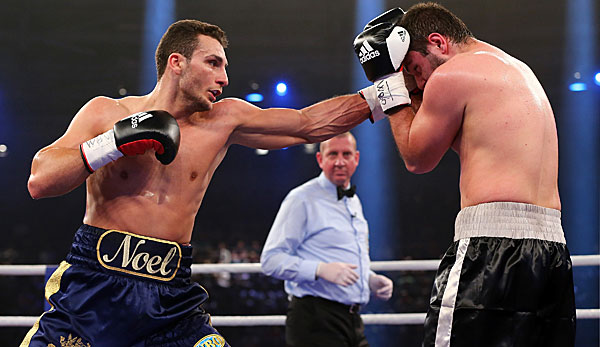 Best night of pro career: So far Gevor has won all 18 fights with minimal fuss.

“Every fight is like a training fight for the big championship fight,” Gevor told RingTV.com. “When I am at this level, I will put my best performance in that fight. I don’t think I have shown that yet.”
Worst night of pro career: The Armenian-born, German transplant beat Alejandro Emilio Valori on the undercard of Arthur Abraham’s win over Paul Smith in February. Although he won six-rounds-to-two on all three scorecards, he wasn’t very happy with his performance.
“My first fight this year against an Argentine fighter,” the 24-year-old said. “I trained for one month. I wasn’t on the card and jumped in for another guy because he was supposed to fight but canceled the fight.

Sanabria, 32, is a former South American champion as recently as last year. This will be his third fight outside of Argentina – he lost on both other occasions, dropping a wide decision to Iago Kiladze in Ukraine and Irineu Beato Costa Junior in Brazil.

“I guess Sanabria ÔÇÄis as hard as every Argentinean fighter,” he said. “They have a big heart and they like to fight, so I think it’s gonna be a hard, tough fight.”

Why he’s a prospect: Gevor wasn’t a big amateur; he estimates he had around 30 amateur contests, he took part in a couple of National Championships in Germany but went to school and stopped boxing.

Even when he wasn’t boxing, he was around the sport because of his stepfather, Khoren Gevor, a noted pro himself.

Gevor feels he has several strengths, “My biggest strength in the ring is my speed and footwork but I have already shown that I can finish a fight with a single punch and not only against bad boxers (laughs).”

His promoter, Kalle Sauerland, believes he has a potential future world champion in his ranks.

“He will be the best cruiserweight in the next 12 months,” Sauerland said. “More power than Marco Huck and definitely more boxing skill.”

Why he’s a suspect: Gevor turned pro in 2011 and has been kept active by his promoter since. He has 94 rounds of professional experience under his belt but he wasn’t a top amateur, so he is still learning on the job.

“I need more fighting and sparring experience due to [the fact] I didn’t have a real amateur career.” he said.
We still have to see how he reacts to adversity inside the ring and how he can continue to develop as a fighter in the packed cruiserweight division. He has a 56 percent stoppage rate suggesting his power may not be elite.

Story lines: Gevor had a normal childhood. His stepfather Khoren – a former European middleweight champion (32-9, 17 KOs) – influenced him at a young age by taking him to his training camp. He would go to the boxing gym after school and practice. In his youth, he took up Tae Kwon Do, though boxing was always his first love.

When Gevor finished high school, he studied Law at the University of Hamburg but still held on to his love for the sport.
“After my studying lessons I sparred with professional fighters and earned some money,” he explained. “Some managers saw me and thought I’m talented, so I got into professional fights. I just wanted to earn some money for my studying but, now, I have a fight every second month and I’m so into boxing that I don’t have time for something else, so I stopped studying for a while.”
Boxing is very much in the family blood. Along with Gevor’s stepfather, his younger brother, Abel (10-0, 5 KOs) is a talented light heavyweight.
Gevor has several boxing heroes: “My boxing idols are, of course, Khoren Gevor. You don’t see many more disciplined fighters than he was…but I also like Andre Ward because of his boxing style. It’s like he can do everything inside the ring. He isn’t the big puncher or the fastest. He does everything by fighting very clever and smart…One of my idols is Britain’s David Haye. I liked watching him train or fight. I guess he’s a great character.”
His goals to come in the sport are to be European and world champion. He would like to avenge Marco Huck’s recent loss to Krzysztof Glowacki and feels he is about a year away from that fight.
Away from boxing, Gevor is single, likes to spend time with his brother and family and enjoys traveling; he also buys and sells wristwatches.
Fight-by-Fight Record
2011
May 27 – Adam Gadajew – PTS 4
July 15 – Vaclav Fiala – TKO 1
Sept. 3 – Rushid Sevim – TKO 2
2012
May 11 – Marko Angermann – TKO 2
July 7 – Michal Bilak – PTS 6
2013
Feb. 22 – Slavomir Selicky – TKO 1
March 16 – Viktor Szalai – TKO 4
June 8 – Juan Manuel Garay – UD 6
Nov. 23 – Sandro Siproshvili – UD 8
2014
Jan. 25 – Loris Emiliani – KO 7
May 3 – Gogita Gorgiladze – UD 10
June 7 – Bela Juhasz – KO 2
Aug. 16 – Ismail Abdoul – UD 8
Sept. 27 – Tamas Lodi – TKO 7
Dec. 13 – Tamas Polster – TKO 5
2015
Feb. 21 – Alejandro Emilio Valori – UD 8
April 25 – Mohamed Azzaoui – KO 5
July 18 – Lukasz Rusiewicz – UD 8
Questions and/or comments can be sent to Anson at [email protected] and you can follow him at www.twitter.com/AnsonWainwright