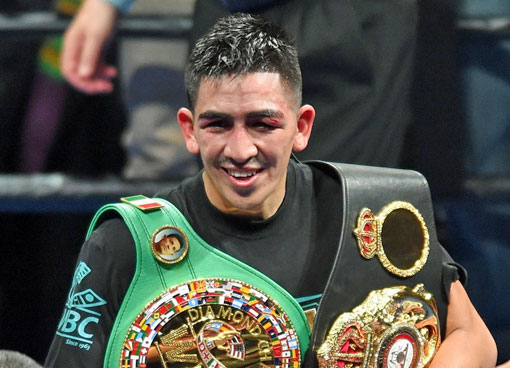 Leo Santa Cruz: We knew the two-division titleholder was good; we just didn’t know how good because he had never faced a truly elite opponent even though he has been a professional since 2006. Now we have a good idea. Santa Cruz overcame the biggest challenge of his career by both outboxing and outslugging a determined Abner Mares to win a majority, yet convincing decision in front 13,109 screaming hometown fans at Staples Center in downtown Los Angeles. Santa Cruz picked Mares apart from the outside when he could and generally got the better of many wild exchanges inside, prompting two judges to give him nine out of the 12 rounds and the WBA featherweight title. I am now convinced that Santa Cruz (31-0-1, 17 knockouts) has the all-around ability to compete with anyone, including Gary Russell Jr. Russell, the WBC titleholder, is a logical opponent for Santa Cruz because they hold major belts and share the same promoter, PBC. The former Olympian is a terrific boxer with blazing-quick hands, which makes him a handful, but Santa Cruz is quicker than you might think and has a volume-punching style (he threw 1,057 punches Saturday) that can give a slick boxer serious trouble. That’s a terrific matchup. And the fact we’re talking about it says something about the new WBA champ: He has finally arrived.

Abner Mares: Mares must be applauded for a spirited effort that helped produce an exciting fight. I think he demonstrated that he remains a relevant fighter after he was stopped in the first round by Jhonny Gonzalez in 2013 and had a few shaky performances after that. He will be in the mix of big fights in the featherweight division, which includes Russell, Nicholas Walters, Vasyl Lomachenko, Lee Selby and others. Mares (29-2-1, 15 KOs) doesn’t have much more room for error, though. He fought hard but lost decisively to Santa Cruz, at least on two cards and in my opinion. The official scoring: 117-111, 117-111 and 114-114. Most experts thought the fight would be closer than that. And Mares is now 3-2 in his last five fights, with only one performance (a fifth-round KO of Jose Ramirez) being particularly impressive. His remarkable string of important victories between 118 and 126 pounds over elite foes – Yonnhy Perez, Vic Darchinyan, Joseph Agbeko (twice), Anselmo Moreno and Daniel Ponce De Leon – between 2010 and early 2013 seems like a distant memory. Will we ever see that Mares again? His recent performances suggest we probably won’t. He’s only 29 and obviously determined, though. We’ll see.

Staples Center: I kept thinking about stories I’ve heard many times about the heyday of boxing in Los Angeles, which peaked in the 1960s, ’70s and into the ’80s. It seemed that Mexicans and Mexican-Americans fought one another every week in L.A. and the fans – as passionate as fans anywhere – flocked to see them. Santa Cruz-Mares had that feel on Saturday. They were both born in Mexico but have called L.A. their hometown almost their entire lives, which has allowed them to build substantial local followings. And their fans showed up in force and in great spirit Saturday, as loud chants of “LEO! LEO! LEO!” or “MARS! MARES! MARES!” bounced off the walls of a pulsating Staples Center throughout the fight. I imagine the atmosphere to be comparable to that of Danny “Little Red” Lopez (who was present on Saturday) vs. Bobby Chacon or Carlos Palomino vs. Armando Muniz, two memorable matchups from the past. And the fighters stoked the flames by fighting like two mad men, exchanging with reckless abandon on a number of occasions as the crowd went wild. I guarantee you that no one inside the arena on Saturday night felt cheated, the only possible exception being Mares. Let’s hope there are many more such fights in one of the world’s boxing capitals.

Mosley-Mayorga: I have no idea what kind of attendance and pay-per-view numbers the Shane Mosley-Ricardo Mayorga fight on Saturday night in Inglewood, California, will have done; we’ll probably never know with certainty. I do feel strongly that the event was doomed from the beginning. Two over-the-hill fighters going head-to-head with Santa Cruz-Mares across town for a pay-per-view fee of $59 (high-definition) never made a lot of sense. An announced (real?) crowd of 4,000 at the Forum is evidence of that. It wasn’t all negative, though. I applaud Mosley for the energy and creativity with which he promoted the event even if he largely failed; I never knew he had it in him. And while the fight had the feel of an old-timers game, it was mildly entertaining. Mayorga remains a showman even if his talents have faded almost completely away. His antics in the ring were amusing. And Mosley, reportedly at a 20-pound disadvantage in the ring, has retained enough of his once-special ability to dominate and then knockout the villain with a sixth-round body shot in this little melodrama. Do I wish I had been there instead of Santa Cruz-Mares? No. Do I think Mosley-Mayorga was a complete waste of time? Well, not a complete waste of time.

I scored the Santa Cruz-Mares fight 116-112, or eight rounds to four for Santa Cruz. Judge Max DeLuca had it a 114-114 draw, or six rounds for each fighter. That’s only a two-round difference, which isn’t an enormous gap given the number of close rounds. I also would’ve scored it a draw had I given Mares two more of several close rounds. And it should be noted that fights are scored as if there are 12 (in this case) 3-minute fights, each scored independently of the others. The vast majority of rounds are 10-9, whether they’re one-sided or very close. There is no differentiation. Judges don’t have the luxury of standing back and reviewing the fight as a whole after the fact. If they did, they might score fights differently. So I don’t want to be overly critical of DeLuca, who I presume gave more close rounds to Mares than I and most others did. That said, I think reasonably knowledgeable fans will have a difficult time accepting his score. Santa Cruz clearly did better work. The punch stats – Santa Cruz outlanded Mares 373-227 in overall punches – bear that out. Maybe it’s more a flaw in the scoring system than anything DeLuca, a fine judge, did wrong.

Rematch? I’m not sure Mares did enough to earn a second fight with Santa Cruz, although I’d definitely want to see it if it happens. I suspect Santa Cruz’s handlers will want to him to build on his momentum and take the next step in his career. One argument in favor of a rematch was the reaction of the fans in the arena. I could see Santa Cruz-Mares as a compelling and marketable series even if the first fight wasn’t as close as some expected. ÔÇª The All-Mexican Julio Cesar Ceja–Hugo Ruiz matchup, on the Santa Cruz-Mares card, had action written all over it as the fighters had a combined 57 knockouts in 64 victories going into the fight. They didn’t disappoint. Ruiz (35-3, 31 KOs) put Ceja down with a left hook late in the third round but Ceja survived. Ceja (30-1, 27 KOs) did exactly the same to Ruiz in the fifth and then followed with a hellacious barrage that ended the fight. Ruiz was leading on all three cards after four rounds. Heck of a fight. ÔÇª The popular Alfredo Angulo (24-5, 20 KOs) brutally stopped Hector Munoz (23-16-1, 15) in the fifth round on the Santa Cruz-Mares card, which isn’t saying much. Munoz was tough and willing but also 5-14 in his previous 19 fights. ÔÇª Heavyweight prospect Trevor Bryan (16-0, 11 KOs) defeated veteran Derric Rossy (30-10, 14 KOs) on Friday in Las Vegas. It was a good learning experience for Bryan and a pretty good performance, particularly in terms of his ability to withstand a lot of pressure from Rossy, but Bryan didn’t have the look of a top contender. That doesn’t mean the Schenectady, New York, product should be written off but he has work to do. I think he’d agree with that.