Mayweather-Berto media day delivers hype and then some 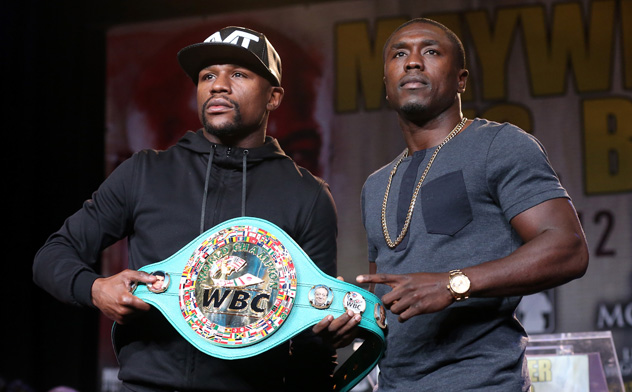 We tick down to a – How do we put this? – somewhat un-anticipated battle between Floyd Mayweather Jr. and Andre Berto on Sept. 12.
I don’t write that flippantly or to be a provocateur…

I write that because, compared to the last Mayweather bout, the most hyped boxing match OF ALL TIME, this one couldn’t hope to be in the same hemisphere, in regard to buzz.

I mean, I guess it could be if Floyd were choosing to exit his comfort zone, head up to 160 pounds, see what he can do six pounds north, against surging terminator and WBA beltholder Gennady Golovkin.

But that isn’t Floyd’s way…What the Leonards and Durans and Armstrongs did, he isn’t into it. And we got a better sense of why, when he talked about how his uncle’s health influences his thinking, he’s pondering retirement (that said, even if he is playing a card, anyone can be moved by the plight of any man losing his mind to dementia, be it from boxing or aging…so my heart does go out to all afflicted by dementia).

Even then, many folks who felt burned by the over-hyped “Fight of the Century” are seeing Mayweather through more cynical eyes and believe he is using that health situation as a card, that he, in fact, has no intention of retiring now and is merely in leverage mode. They think Mayweather has zero intention of hanging up the gloves after this Berto fight and is only talking the “R-word” as an element to build up interest in a bout which fares poorly when placed alongside the build-up when he accepted a challenge against a man who fans clamored for him to fight for almost six years.

But Berto is no Golovkin; he’s lost three of his last six and most experts and even casuals give him next to no chance to bother, let alone beat the self-proclaimed “TBE.” Again, that’s no gratuitous slam; the same can and is said for most, any and all in and around 154 pounds. Floyd is indeed among the The Best Ever, defensively, and does enough offensive work to win 98% of the rounds.

It is with all that in mind that we take in promotional efforts like the Mayweather media day, which unfolded Wednesday at his Las Vegas gym. Showtime sent out a video of the session, which was hosted by someone named “Big Tigger” Morgan and journo Mark Kriegel. They added on promotional tack-ons, testimonials and such, to give all a better sense of what we can maybe expect Sept. 12.

Kriegel did his part, talking up the atmosphere at the gym, and said this was “an end of an era.” That is, if Floyd is to be held to his word, he noted. Kriegel shilled capably, called the undercard “very excellent” and said he was mightily enthused about the Rocky Martinez vs. Orlando Salido rematch. It could be a “Fight of the Year” type tangle, he said. Interestingly, he was playing up the undercard more heavily and before he talked about the main event.

Tigger told us about the kickoff presser and we watched footage of the soft-spoken Berto and Mayweather, neither of whom showed more than an ounce of fire as they discussed their clash. We also saw a recap of the Floyd master class over Manny Pacquiao and saw Floyd tell us how he beat “Pacman.” He let him shoot his load, he said, and we saw journos like Kevin Iole and Lance Pugmire tell us how TBE handled the Congressman so easily (though our man, Freddie Roach, does still maintain that Pacman maybe won, telling me that 90 percent of the people who come to his gym tell him MP bettered FM).

Some good points were made, such as, Floyd doesn’t engage in thrillers because he’s so damn talented. He’s head and shoulders and another head better than everyone else and, thus, he doesn’t get tested. That and he’s so risk-averse, choosing not to risk trading, to shoot for stoppages, which are, of course, considered a fan-friendly methodology.

We also saw Berto trainer, Virgil Hunter telling us what Berto brings to the table. And the journos did their job, as sometimes I do when asked, and that is to show enthusiasm and look for the upside, bright-side possibility in a match-up. Indeed, does the possibility exist that Berto could win? Sure. Slim is in the driver seat, though, as he does have that punchers’ chance. And this will have me and you watching because of what MIGHT happen. What will happen is pretty preordained because Floyd is so talented.

Interestingly, Floyd has posited that Berto could hit the canvas; that isn’t Floyd’s way and usually he doesn’t promise or hint at such, so I wonder if he’s going to maybe use Berto’s aggression against him. I doubt it and anyone considering buying on the possibility that he achieves a KO should caution themselves that his recent history indicates this is not in the cards. In this Sho video, we saw Mayweather right-hand man Leonard Ellerbe say he thinks Floyd will KO Berto, so, hey, maybe he knows something we don’t, that Floyd will dial in and be more intent on offense on Sept. 12. Time will tell…

Ellerbe also spoke of this being Floyd’s last live outing. If this is the case, he will receive high praise from me and just about everyone else, as I don’t know of one person who thinks he actually will leave the sport, for good, after Sept. 12.

“I think the fans can expect a knockout in this fight. I think he’s looking to go out and retire with a big knockout,” said Ellerbe. We heard Sho boxing boss Stephen Espinoza also speaking the R-word: “He looks forward to retirement just like the rest of us.” And then the main event was presented as a possible “fairy tale” sort of event, with Pugmire noting that we have to consider the possibility that Berto could be the puzzle-solver.

There was much, much more and here is the release which went out, from the Mayweather people, with quotes from the session: