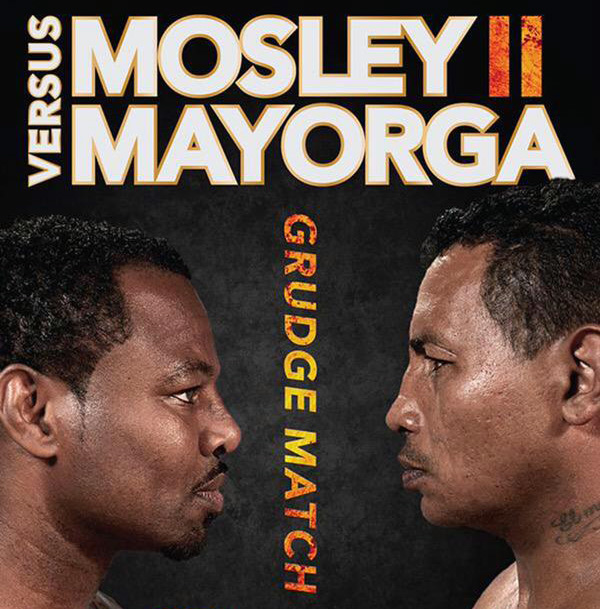 It almost seemed too much, the end of last week, seemed like the deck was getting stacked against him, that he took on too much, that the powers that be were going do what they could to squash his endeavor. Shane Mosley was at the end of last week wondering, I think it’s fair to say, if he bit off more than he could chew. Today, though, he was on ESPN’s “SportsNation,” looking in shape, younger than his years, sounding articulate and confident that his Saturday night card, which he’s promoting, and main eventing, will be a success.

On social media, he’s now a Twitter must follow. And he’s been a viral hit, when he went Ninja and smacked a lit ciggie out of the mouth of his again-foe Ricardo Mayorga, at a press gathering a couple weeks ago. And again yesterday, they beefed, after the Nicaraguan hothead lightly smacked the bum of Shane’s lady during a presser. Mosley leaped at boxing’s Marlboro man and they were separated.

Accusations abounded that the bum-slap was a work, a bit meant to draw attention. Word spread that Mayorga said he was asked to perform the task. I asked Mosley, age 43, about that. He reiterated what he told SN host Max Kellerman, that it wasn’t staged. He told me that Mayorga is now saying it was staged because the President of Nicaragua called the boxer and told him to stop acting the fool, and threatened to kick him out of the country. That aside, Mosley is pumped, because he defeated heavyweight power Don King, who tried to stop Mayorga from boxing, maintaining that he had him under contract. A judge sided with Mayorga, and Mosley, and Mosley enthused to me, “We won!” when he got word that down went King.

“We will continue to battle in court until all damages we suffered from this lawsuit are satisfied,” he told me.

Of those powers that be…uber advisor Al Haymon is presiding over a PBC card the same night as Mosley’s card, pitting two names, Leo Santa Cruz, and Abner Mares, against each other, the highest-profile A side vs. A side scrap thus far, arguably, put out by the PBC team. Mosley isn’t scared and told me his show, running at the Forum in LA, will see butts in seats. “We might sell out,” he said. The joint holds 14,000 and they’ve given away about 1,500 tix, he said. “To my understanding, we only have a few thousand left,” he said.

And oh yeah, his fight…he fought Mayorga before, in 2009, and kayoed him at the midnight hour. He wants to do it again, earlier this time, as his lady has requested payback for the bum-smack. Has he trained enough? Has the King suit drained his mental energy? Pertinent questions…but one big one is not up for debate…the show must go on, will go on, and I’m guessing that even though these guys are in their fourth decade of living, we get some decent rumbling. You can buy it on pay per view.