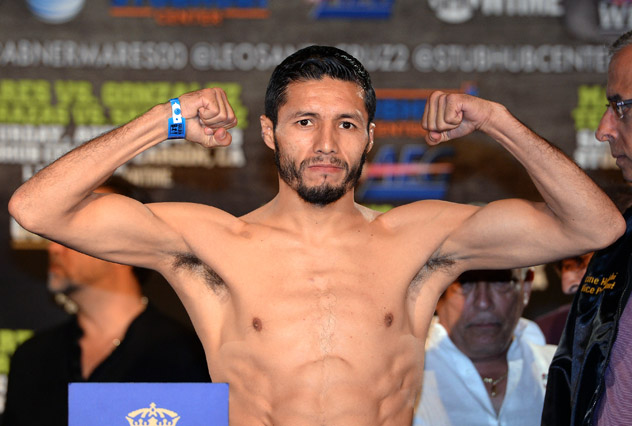 A junior lightweight scrap between Jhonny Gonzalez and Jonathan Oquendo will be the opening bout of the Floyd Mayweather Jr.-Andre Berto Showtime Pay-Per-View broadcast on Sept. 12, it was announced on Thursday.

Three-time world titleholder Gonzalez (58-9, 49 knockouts) will be in his second fight since losing by fourth-round TKO to current WBC featherweight titleholder Gary Russell Jr. in March. Gonzalez had won the belt three fights earlier on perhaps the biggest night of his career, when a brilliant left hook led to an upset first-round knockout of Abner Mares in August 2013. The Mexican veteran’s long career also includes victories over Marc “Too Sharp” Johnson, Irene Pacheco and Fernando Montiel.

Mares was responsible for Oquendo’s most recent loss, a unanimous decision in July of last year. The 32-year-old Puerto Rican has fought once since then in a 10-rounder against Gabino Cota.

“This will be an attractive fight for the fans as we all know that the sporting rivalry between Mexico and Puerto Rico always generates great battles,” said Gonzalez in a press release. “Oquendo is a fighter who always goes forward and who likes to exchange blows. I will demonstrate that I have the desire to return to the top and fight for a world championship. Participating on a Floyd Mayweather event is a great opportunity for me and I will make the most of it.”

Oquendo (25-4, 16 KOs) has fought five times at the MGM Grand in Las Vegas already but he also stressed the importance of performing on such a large stage, as well as doing his part in the storied Mexico-Puerto Rico rivalry.

“This opportunity against Jhonny Gonzalez is very important because I will face a former world champion and will be part of a great show headlined by Floyd Mayweather,” said Oquendo. “It’s an honor for me to be part of the undercard of this event. I’m excited to share the stage with my countryman Rocky Martinez, who also has a big fight against Orlando Salido, so there are two wars between Puerto Rico and Mexico. We are training hard to get in top condition for this fight.”

The main event, a 12-round welterweight bout for Mayweather’s RING, WBA and WBC titles, will be supported by the aforementioned Martinez-Salido fight for the WBO 130-pound title in addition to a super middleweight matchup between WBC titleholder Badou Jack and challenger George Groves.