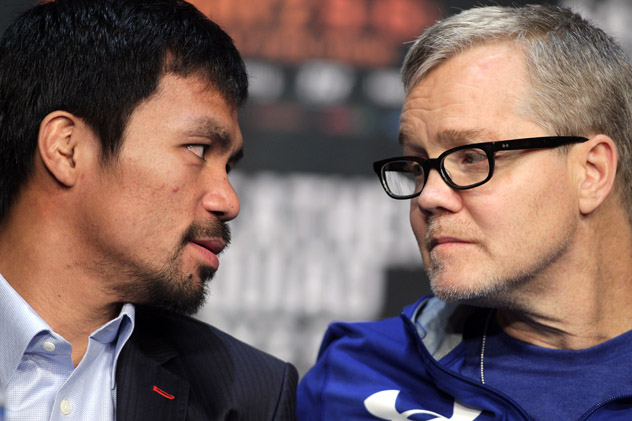 You may have noticed an uptick in activity at the oceans of this planet, after Manny Pacquiao told the Philippine Star that his injured right shoulder, which went under the knife on May 7, is well, miraculously so.

“I never saw a doctor. I never did rehab. All I did was swim in the sea as often as I could. The salt water healed my wound,” he told the paper.

Now me, I have to think he said that with a twinkle in his eye, and a knowledge of how we knuckleheads receive such “news.”

Yeah, the guy ain’t bad at keeping himself relevant in between fights, and after a few years in politics, he knows EXACTLY what sort of stuff floats our boats. That’s well and good…but what is less good, in my mind, is that these sort of pronouncements give fertilizer to the conspiracy theorists who say Paccman never had surgery, it’s a made up farce, and is total BS, constructed to give him cover for stinking up the joint versus Floyd Mayweather on May 2.

This is an age where conspiracy theories flourish, as the ease of transmission means a numbskull can hurl his loopy accusation around the world twice before the truth intervenes. I went to a good source, trainer Freddie Roach, to ask about that shoulder, and remind people that Roach drove Manny to the surgery and has info on the rehab the guy supposedly didn’t do.

So he DID have surgery, OK, maybe he just heals REALLY quickly, freaskishly so?

“No, we did have a bit of a slow rehab at first because he’s doing it in the Phippines. So we flew out one of the people, one of the (surgeons’) people, to do the rehab (with) him. That was about three weeks ago, I believe he’s still there.”

Freddie said yes, Manny got a late start on rehab, mostly because he believes in himself so much, I think, and out of ignorance.

“They get an operation and they think it’s all done,” he said. The rehab is harder than the surgery, Freddie told Manny, and he told the boxer that if he does no rehab, there will be no more boxing. The rehab’s has been on for over a month, he’s playing hoops, and things are on target to see the fighter back in a ring working out in maybe three to six months.