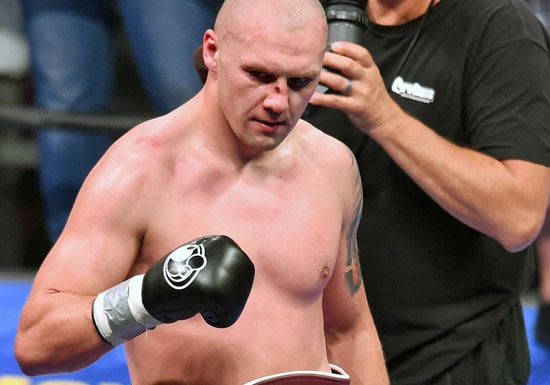 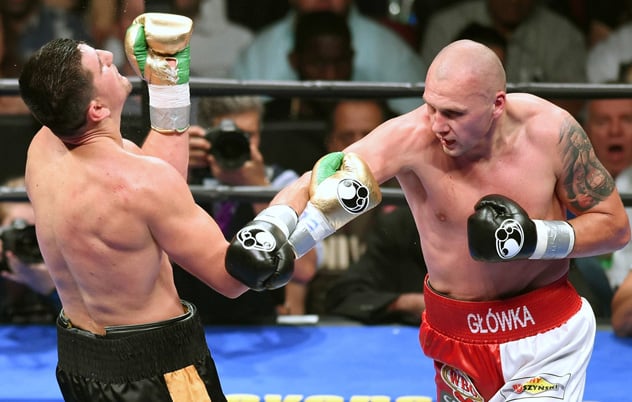 Krzysztof Glowacki (R) scores the 11th-round punch that would send then-WBO cruiserweight champ Marco Huck to the canvas. Huck got up but was knocked out moments later. Photo by Naoki Fukuda.

Krzysztof Glowacki was expected to be the man Marco Huck would beat to make a division-record 14th defense of his WBO cruiserweight title.

Entering the bout there was nothing on the Polish fighter‘s record to suggest he was capable of pulling the upset. A trip to the canvas in the sixth round did little to dissuade anyone from that opinion. But for Glowacki it was a turning point. He rose and elected to fight fire with fire, and his sterling effort saw him narrowly trailing on the scorecards after 10 rounds.

In the final minute of the 11th round Glowacki threw a two-punch combination. The first caught a squared up Huck flush and the second sent him to the canvas. Although the defending champion got up, he was clearly in trouble. Glowacki sensed his moment had arrived and went for the finish, landing a big left hook that sent Huck into the ropes. From there Glowacki teed off on the German until referee David Fields jumped in to wave the bout over and Huck fell prostrate against the bottom rope.

Looking back on the huge win that sent shockwaves through the cruiserweight division, Glowacki is unsurprisingly still jubilant about becoming only the fourth male from Poland to win a professional world title.

“I’m very proud; it was the most pretty night in my life,” he joyfully proclaimed to RingTV.com through Andrew Wasilewski. “I’m world champion, I beat (the) famous Marco Huck and I did not disappoint my family, my team, including Al Haymon who, together with my promoters Andrew Wasilewski and Leon Margules, gave me this great opportunity.”

He was also quick to single out his friend, former WBC and IBF cruiserweight boss Krzysztof Wlodarczyk.

“I want to thank to Krzysztof ‘Diablo‘ Wlodarczyk,” the 29-year-old southpaw, now rated No. 3 at cruiserweight by THE RING, said. “Great Polish fighter who helped me a lot in preparation. He is much, much stronger than Huck and I’m sure that he will be world champion again. Nobody can punch stronger than Diablo!”

Glowacki (25-0, 16 knockouts) didn’t see his family for two months because of training commitments before the fight. He is making up for that now by spending time with them and enjoying a two-week holiday.

Having made such an impression in his American debut there will be no shortage of options available to him in the talent-laden division when he returns.

“There is no rematch clause in our contract,” he said when asked if he has to face Huck again. “I do not know who will be my next opponent. I have great manager and great promoters, I will absolutely trust them.

“My dream is to defend the title at least one time in Poland. For (Polish people it) would be a great holiday, we are not so powerful in boxing like Americans. Maybe it would be a great time to promote PBC (for the) first time in Europe in Poland? It would be a historical time for everybody!”