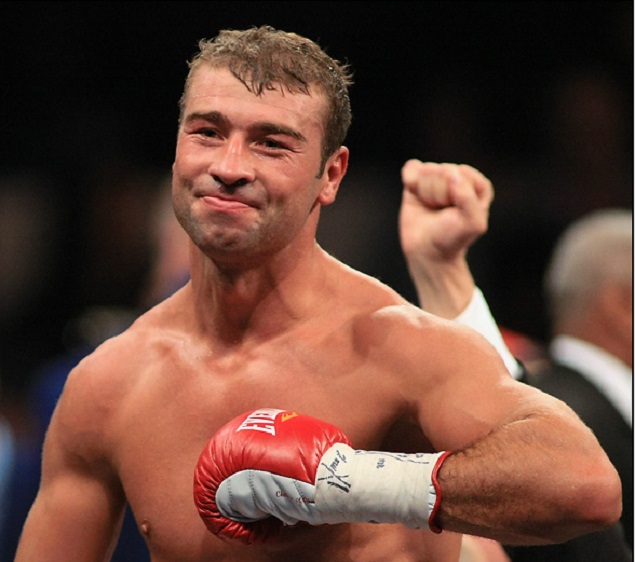 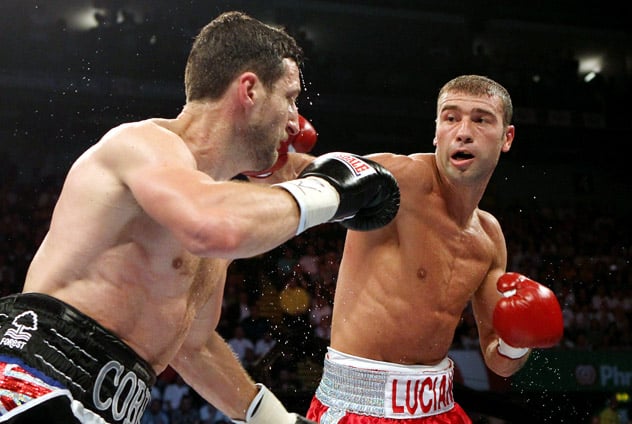 Lucian Bute (R) admits that the manner in which he lost his IBF super middleweight title to Carl Froch (L) in 2012 affected him mentally. Photo by Scott Heavey/Getty Images.

Since losing his IBF super middleweight title to Carl Froch in May 2012, Bute has fought just twice, going 1-1. At age 35, he knows he can ill-afford another setback.

“This fight will be crucial for my next move,” Bute told RingTV.com. “I treat it as the most important fight and I am taking my opponent very seriously. It’s the main event on a worldwide platform such as Premier Boxing Champions and I am very grateful for the opportunity.”

Bute (32-2, 24 knockouts) will meet Di Luisa at 171-pounds, though has his eyes on a return to 168-pound in the future. The Romania-born fighter who has Canadian citizenship isn’t looking past Di Luisa.

“No one in particular,” the southpaw boxer-puncher said when asked who he is aiming for. “For now my target is Di Luisa. After I win this fight, as I expect, I am looking to challenge any current champion at super middleweight or high ranked challenger to get into a mandatory position.”

Also scheduled for the Jean Bedard (Interbox), Yvon Michel (GYM Promotions) promoted card at the Bell Center in Montreal, Canada is a light heavyweight bout between THE RING’s No. 5-rated contender Eleider Alvarez and Isidro Prieto. Up-and-coming heavyweight Oscar Rivas steps up to 10-rounds for the first time on the undercard.

RingTV.com – What are your thoughts on facing Di Luisa?

Lucian Bute – After 19 months I am back in the ring and it’s only my third fight in three years. I have a new team and a new attitude. I am sure my opponent is determined to make a name for himself by beating me. I will be ready for him.

RTV – What do you feel Di Luisa brings to this fight in terms of strengths and weaknesses?

LB – He has good speed and a sharp jab. He seems to be in good physical condition for his fights. A come-forward style which will make it a good fight for the fans. I would not call it a weakness but his straight up boxing style might play to my advantage. In any case, my opponent will bring his best to try and defeat me. He has nothing to lose, so no pressure on him.

RTV – The fight takes place at the Bell Center. You have enjoyed considerable success fighting there. How excited are you about that prospect?

LB – Very excited! I was ready to make a return fighting anywhere and the fact that the fight is to take place where I consider it as my home at the Bell Center is a huge advantage to me. My fans have supported me throughout my career and I hope they come out again to encourage me. I need them and I owe them a great fight.

RTV – Will this fight be at super middleweight or light heavyweight? What division are you looking at fighting on from here on?

LB – I have not fought at super middleweight since 2012, so, for this fight, we negotiated a catchweight of 171 pounds but my goal is to fight at 168 pounds after my August fight.

RTV – Since the Pascal fight, you went to train with Freddie Roach but that didn’t work out. Can you tell us about that?

LB – Freddie is a great trainer and person. I had a very positive learning experience with him. I am thankful to him and Manny (Pacquiao) for allowing me to be in camp in the Philippines. Unfortunately, late in my camp, I had an injury and I had to pull out of my fight. It was very disappointing to me and I took a few months off to recover.

When I was ready to come back to train, I had to make a decision whether I am comfortable going away to train in Los Angeles, even before my camp would start. After considering all factors, I concluded that I needed to try and find a way to train closer to home and my family. I learned new things with Freddie and it was challenging every day. I couldn’t wait to go back the next day, after every training session with him. His training skills and boxing passion are huge helps for every fighter who works with him.

RTV – How has training camp been for this fight? Where have you trained? Who are you training with? Perhaps talk a little about how motivated you are, training six days a week, twice a day.

LB – By far, this has been one of my better camps in recent memory. I was in camp even before I knew of this fight. I am training out of Grant Brothers Boxing gym in West Island of Montreal, a 15-minute drive from my home in Laval, on the North Shore of the Montreal Island. I am training with Howard and Otis Grant. I have known them for years but never worked with them before. I started working in their gym in early May and the chemistry was instant. I like their different approach and what they bring new to my training. I also enjoy their gym and the family atmosphere of support for everyone attending it, regardless of their level as amateur or professional fighters.

RTV – It’s been 19-months since your last fight. Why have you not fought since the Pascal fight? Please talk about the back injury you suffered.

LB – After the Pascal fight, I had to make some hard decisions. I took some time off and made the changes that I thought were necessary, starting with the split from my longtime trainer. I cleaned up my close circles and worked up a strategy of return and getting back on track. I had a fight set for Dec. 6 but a back injury late in camp made it impossible for me to return at 100 percent so I pulled out. It was an unfortunate incident and I had to wait a few months to recover properly. Now, I feel great. I have no health issues and I expect to be in tremendous shape for my fight on Aug. 15.

RTV – In the past three years since the Carl Froch loss, you have only fought twice. Can you tell us about this?

LB – I fought early after the loss to Froch without making any changes and I was not happy with my performance. After that I moved to full light heavyweight to fight Pascal but the original date was postponed due to my hand injury and surgery on it. I had to wait to recover before the Pascal fight was rescheduled. It’s all in the past now. Changes were made and I am healthy and I expect to fight often.

RTV – It has been said that losing in that manner against Froch affected you mentally as you don’t appear to be the same fighter you were before that fight. How would you answer that?

LB – It definitely affected me more than I expected and it showed in the two fights I had since that loss. The time off helped and now I feel energetic, motivated and determined to perform like I did during my reign as a world champion and even better.

RTV – Having achieved as much as you have in boxing. What goals do you still have?

LB – My goal is to become two-time world champion and have the chance to unify titles.

RTV – In closing do you have a message for Di Luisa and the boxing world?

LB – I wish him a good camp and I expect him to be at his best on Aug. 15. I will be ready and, I hope, we give fans a great fight. My message for the boxing world is simple: Lucian Bute is back!