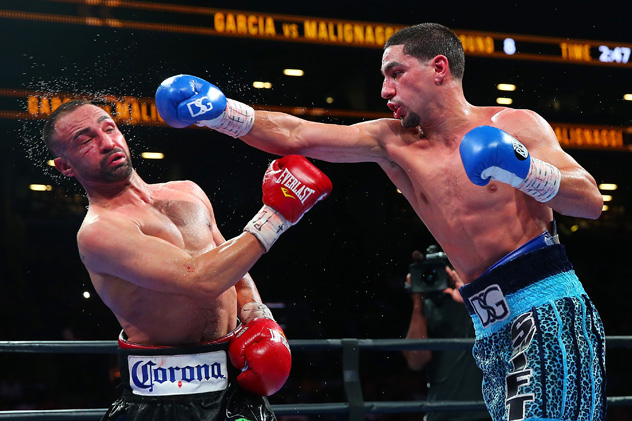 BROOKLYN – Danny Garcia pushed his record to 31-0, (18 knockouts) with a dominating ninth-round stoppage of Paulie Malignaggi on the Premier Boxing Champions on ESPN show Saturday night in Brooklyn. It was Garcia’s first fight at the official welterweight limit.

Still, the Philadelphia fighter can’t seem to get a break even when he wins. Referee Arthur Mercante Jr. came in and stopped the fight at 2:22 of the ninth round, which was greeted by a spattering of boos and more than a few shaking heads.

When the end came, Garcia was up 79-73 on judges Eric Marlinski and Benoit Roussei’s scorecards, and 78-74 on John Poturaj’s card. Marlinski and Poturaj gave “The Magic Man” the seventh round, but otherwise it was absolute domination by Garcia.

“This is probably it,” responded Malignaggi (33-7, 7 KOs) when asked if this was his last fight. “I was trying to dictate the pace because I didn’t want him to get into a groove. He’s a hard puncher and I didn’t want to give him confidence to land a big shot. I wanted to dictate with my jab and keep him missing so he’d second guess on throwing his power. The less power shots he throws the less power shots he could hit me with. I was trying to take a bit of his confidence. He was walking me down fairly well behind the jab. He cut me in the fourth and I think that upped his confidence. I never could get control of the pace, though. In spots I felt I was giving up less ground and I had him missing. He got back on his groove, though, and he had a strong advantage, maybe 70 percent to 30 percent.

“I think Danny can be an upper-echelon fighter, he already is. And he can put his name in the history books. He has a lot of talent. People don’t realize he has a lot of character too. He has a very good poker face. He doesn’t get frustrated, and if he does he doesn’t show it to you. His father’s a great trainer and he really stays on him. Danny listens and they have a great relationship. Every time a round would start it was like he was fresh. Even at the end of rounds when I gave him something to think about he came back, and that’s really important.

“I’ve got a really good job commentating and watching great fighters fight ringside. I hope to sit around ringside for a long time. I felt like if I couldn’t put up a great performance tonight then it would be my last. I was trying to hang tough as much as I could. I remember when I was taking big shots I just kept thinking, ‘Don’t give in. This is your last night if you give in. Don’t show that you’re going to give in. If you can show that you’re still hungry for it then you’ll convince yourself that this isn’t the end.’ I wanted to keep showing that I want it. Little by little he broke me down, and I have no problem with the stoppage.”

Said Garcia afterward, “I feel strong, I feel good, and I used my jab. I have things to work on. I’m proud of myself, 147 is where it’s at.”

The first round was sloppy, with both fighters missing. But Garcia was the slightly more effective fighter, landing a few rights, including one on top of Malignaggi’s head in the last 10 seconds of the round. That stirred a little something in the Magic Man, who felt compelled to talk a little to Garcia as he was heading back to his corner.

In the third, Garcia opened up a cut over Malignaggi’s right eye. Swift was patient, aggressive, and at that time probably feeling very confident. Malignaggi, on the other hand, seemed more apt to fight after each round than he was during.

Meanwhile, Angel Garcia, Danny’s trainer and father, was growing more agitated. In between the third and fourth rounds, Angel implored his son to use the left hook when he closed the distance. When Garcia tried loading up, Malignaggi wasn’t there to be hit. And again, after the fourth, Malignaggi punctuated it with histrionics after absorbing a series of Garcia punches against the ropes, doing an exaggerated high-step that was quickly doused by Mercante.

By the sixth, fans seemed more entertained by a fight at ringside than they were with what was happening in the ring. Garcia began landing more forceful blows. Malignaggi was showing the beginnings of a cut below as well as above his right eye.

It was evident that Malignaggi was taking severe punishment – though he kept coming back.

In the seventh, the Magic Man tagged Garcia with a right uppercut. However, it had little effect on Garcia, who walked right through the punch. The seventh was Malignaggi’s best round. He closed the frame with a straight right after a combination. If Malignaggi was able to punch a little, it may have caused some problems.

With his left side a reddish hue from Garcia’s body shots, Malignaggi began slowing down in the eighth. Garcia, plodding, flat-footed, had Malignaggi in trouble with a right, followed by a left hook. It seemed only a matter of time before Malignaggi would succumb under the punishment.

Mercante took a close look at Malignaggi after the eighth. The general sense was the end was near.

After Garcia landed a body shot that forced Malignaggi to backpedal, Mercanti grabbed and hugged the Magic Man, ending it at 2:22 of the ninth round.

“I’m really proud of Danny, he did what he had to do,” Angel said. “He retired Paulie Malignaggi. If Paulie was my son, a family member, I would tell him to retire.”