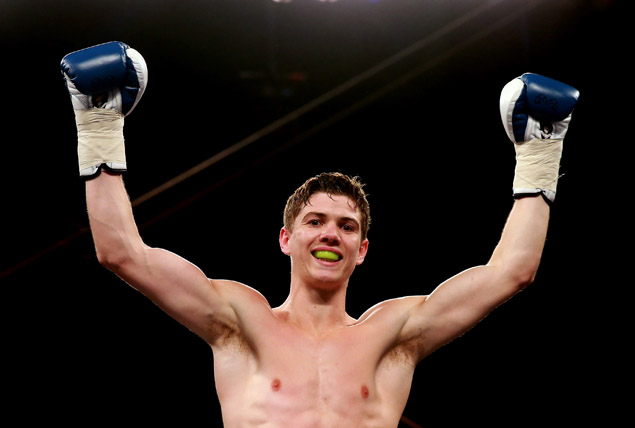 British lightweight Luke Campbell knocked out neighborhood rival Tommy Coyle in the 10th round with a sparkling display of effective aggression and counterpunching Saturday in Hull, England. The official time was 1:41.

Campbell, a gold medalist at the London 2012 Olympics, had Coyle down once in the second and three times in the 10th in scheduled 12-rounder, with most of the damage coming via crippling left uppercuts to the body. The soldier-brave Coyle got to his feet each time but the referee wisely halted the action when Campbell trapped him in a corner and unloaded at will.

“What a tough man Tommy Coyle is,” Campbell said when interviewed by Sky Sports in the U.K. “I had to be patient and pick my shots because I knew he was going to be there all night long. I’m thankful to the fans that came out to support us. I want to reach the top.”

Coyle swarmed his southpaw foe in the opening session but went down from a perfect left uppercut to the body in Round 2. He got up and responded by attacking again with ferocity, which only served to open him up for more slicing combinations.

Campbell troubled his man in each round with blurring hand speed and a brutal body attack, which continued to extract a heavy toll on Coyle. The underdog made life difficult for Campbell at times with rough house tactics but he was paid back in full by harder and sharper blows throughout the contest.

Another crisp left uppercut to the body in the 10th resulted in a second knockdown and that was the beginning of the end. Coyle, undoubtedly one of the bravest men in British boxing, gamely got to his feet but he was running on empty. He was bundled to the floor twice more by dozens of shots to head and body, which prompted the referee’s intervention.

The British lightweight scene is on fire at the moment. Manchester’s Terry Flanagan recently captured the vacant WBO belt when Jose Zepeda was retired because of an injury. Anthony Crolla and Kevin Mitchell both came within touching distance of securing world honors against Darleys Perez and Jorge Linares, respectively. Former two-weight titleholder Ricky Burns has also returned to 135 pounds. And Derry Matthews, who stopped Coyle two years ago, is also on the scene.

Campbell (12-0, 10 knockouts) is a new and ominous force who is snapping at their heels and he looks destined for big things.

The 27-year-old has been let off the leash very early by Matchroom Boxing, a sure sign of their overwhelming confidence in him. He is already highly ranked and it will be interesting to see if Campbell’s team bypasses the domestic title route in favor of securing a world championship fight as Eddie Hearn suggested.

“Luke Campbell has shown that he’s world class,” said the Matchroom boss. “You could be looking at one of the best lightweights in the world already. Next year he will be challenging for a world title.”

Also on the card, former world title challenger Brian Rose avenged a controversial first-round stoppage loss to American Carson Jones when he defeated Jones by a unanimous decision in a 12-round junior middleweight fight.

Rose survived a shaky second round, when he was hurt by a big right hand, and then an old wound on the bridge of his nose reopened and bled profusely. That injury was a real dilemma for the remainder of the contest but the home fighter put on a spirited display to outbox Jones in what was arguably a career-best performance.

“I was really nervous tonight,” said Rose. “I made it difficult for myself because I wanted a tear-up. I don’t know why. I’ll probably get shouted at for that.”

The aforementioned Burns made a triumphant return to the lightweight scene with a bizarre fifth-round stoppage of Prince Ofotsu. The former two-weight world title holder scored well in each round and was clearly in command but the visitor’s corner threw in the towel while their fighter was still in the game and under no real pressure. The referee reluctantly accepted the corner retirement, the crowd booed incessantly and Burns looked on in bewilderment.