Cesar Cuenca: ‘I train to death for every fight’ 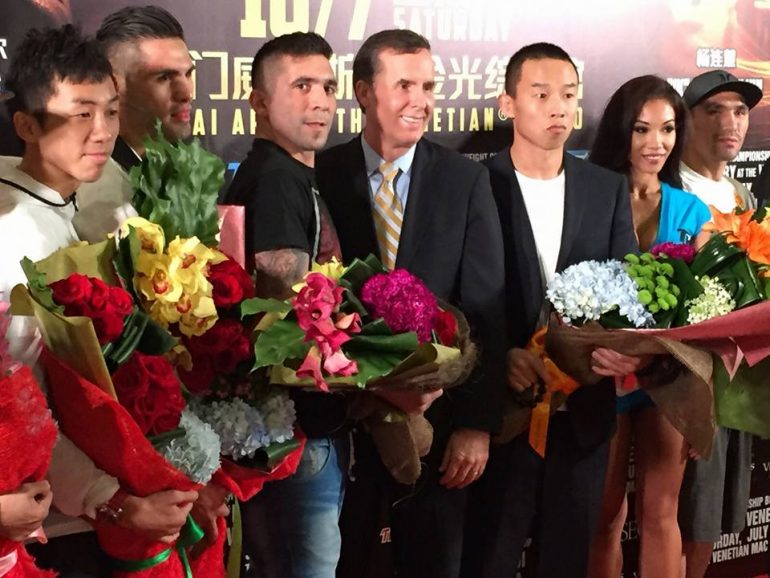 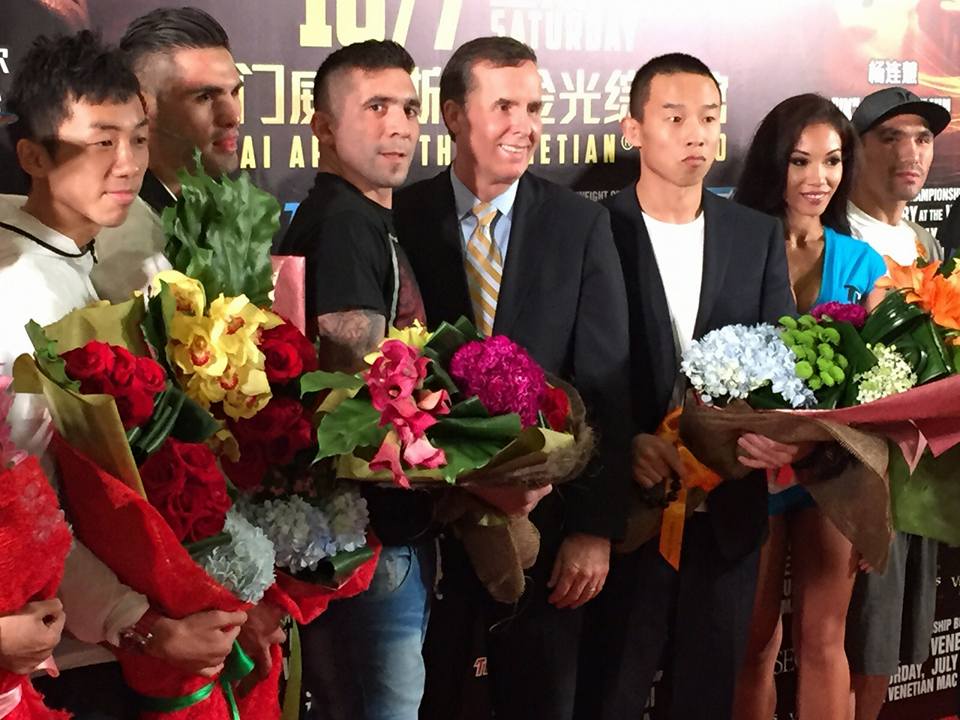 Undefeated junior welterweights Cesar Cuenca (third from left) and Ik Yang (third from right) will clash in Macau, China on Saturday, July 18 for the vacant IBF title. Photo courtesy of OR Promotions-Argentina

The race to match Rocky Marciano’s historic 49-0 unbeaten record has been a recurrent theme in boxing since the late, great heavyweight champion retired back in 1956. Most fighters have failed to reach that magic number as their careers enter the most perilous stage of their paths to glory.

Argentina’s Cesar Cuenca is just one fight away from achieving that goal but, for that, he will have to put on a Rocky-esque performance closer to Balboa’s than Marciano’s as he travels to China to battle against all odds in his first title fight (in his first bout on foreign soil) against local power-puncher and fellow unbeaten contender Ik Yang in Macau, China with the vacant IBF junior welterweight belt on the line.

Cuenca (47-0, 2 knockouts) will have anything but a puncher’s chance against Yang (19-0, 14 knockouts) and he will put everything on the line in a fight that could either expose him as a soft touch or anoint him as a master boxer. But the smooth boxing tactician is convinced he is poised to make the big jump and join the ranks of fellow junior welterweight Argentine boxing legend Nicolino Locche (who only had 17 stoppage wins in 136 career bouts) as a feather-fisted technical boxer who traveled to the Far East and came back (just as the Locche did after beating Takeshi “Paul” Fuji in Japan in 1968) with a 140-pound title belt around his waist.

“I am handling it well and I believe I am really taking it easy, better than ever,” said the 34-year-old Cuenca, in a recent telephone interview, about the pressure and the expectations on his first trip away from his land. “I am confident in the work we’ve done. I have a lot of faith in my work and in God. Honestly, I can’t imagine [the moment of the fight] yet. I would have to wait for the moment and see. I hope everything goes well and hopefully I’ll beat the crap out of this guy.”

As much as Cuenca’s wish may sound like an overstatement, he is certainly capable of beating a solid dose of respect out of his opponents, as he has already demonstrated against heavier punchers (a group of fighters also known as “everyone not named Cuenca”) like Claudio Olmedo and Carlos Vilches, who were stopped in their tracks several times by Cuenca’s solid right jab and left counters.

And although he lacks the ability to follow up with damaging combinations, the damage done by his isolated straight lefts is more than enough to keep his opponents honest.

“I know most of my opponents end up being surprised about my power,” said Cuenca, when asked about the diminished expectations his foes usually place on him due to his ability (or lack thereof) to score a stoppage, “and so will [Yang]. He comes to fight openly and I think this will favor my style. We’re well-trained and we’re ready to hit him from all angles. That’s my goal and that’s what we’re working on.”

Conversely, Cuenca’s defensive prowess and his ability to neutralize his opponents’ power with his ability to roll with the punches from his southpaw stance has given him more satisfaction in the ring so far but he is well-aware that it will take much more than that to win a title in hostile territory.

“I am more of a stylist than a KO artist, clearly, and I believe in the ‘art of boxing’ instead of the ‘business of bruising,'” said Cuenca in an obvious understatement. “I believe this is how I’d define myself. I would like to leave the impression of a guy who always comes well-trained and prepared to win. I hope to be able to lift the title in the end and give all the people that believe in me and in my boxing style a moment of glory.”

True to his nature and unusual style (which earned him the moniker of “El Distinto” or “The Distinct One”), Cuenca fails to see his low knockout percentage as a weakness.

“I don’t put any thought on that. I only think about training and, in every fight, I have to do my best. That’s all,” said Cuenca. “I respect what people say but they don’t get up in the ring to fight like I do. I train to death for every fight and that is enough for me to feel secure about myself.”

In line with that way of thinking, Cuenca admits he is not planning to make any adjustments to pander to judges, fans or TV execs alike, although he clearly understands his work rate will have to be increased accordingly if he truly wants a chance at victory.

“I just know I have to be well-prepared,” said Cuenca, when asked whether he’ll try to make any changes in a style that has earned him as many fans as detractors in his homeland. “But I know I will have to hit him with everything I have and leave no doubt because the judges will be hard to impress.”

After 47 fights, Cuenca’s style may already be too firmly established to make any serious changes and studying his opponents (a task entrusted to his trainer Mario Tedesco’s son, Patricio) will not have an impact in his fight plan either.

“I didn’t see any videos,” said Cuenca about Yang, his 30-year old opponent, who is coming off a sixth round stoppage win against Thailand’s Patomsuk Pathompothong in Macau, back in March. “I know he hits hard; he is undefeated. I will always fight with my style but now I will have to press a little harder because we are the visitors this time. I know that the whole thing with the judges is complicated because [Yang] is the local fighter but we’re working on throwing 10 punches at a time instead of just three, just so we don’t leave any doubts.”

As he gets ready to match Marciano’s record, Cuenca knows he’s in no position to match Balboa’s come-from-behind heroics and, although only one number separates him from the real-life Rocky, he knows he’s a lifetime away from matching the achievements of the fictional one. And yet the native of Tres Isletas, Chaco, who grew up working in the family’s charcoal business cutting down trees (then chopping them into small pieces from sunup to sundown) under the scorching heat, still likes his chances of seeing his unusual style appreciated by the boxing connoisseur of the world one day and getting the acknowledgement he believes he deserves.

“If I win this fight, a lot of doors will open for me,” said Cuenca. “Right now I just have to overcome this obstacle and, after that, I don’t believe I’ll be in a position to pick and choose my opponents but I won’t be able to duck anybody either. I believe I have to face whomever they put in front of me. I can deal with anybody, I don’t care what style they put in front of me. Once you have a title, you have to exploit that and reach out for the top. I believe they will start calling me from the US once I get the belt. They will have to start getting used to my way of fighting.”