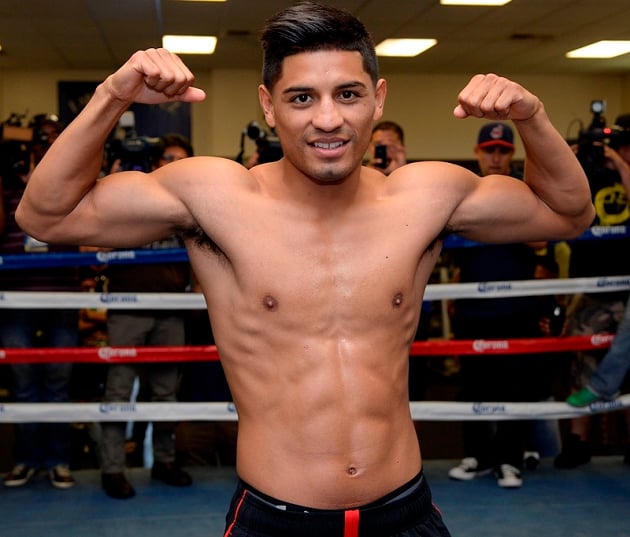 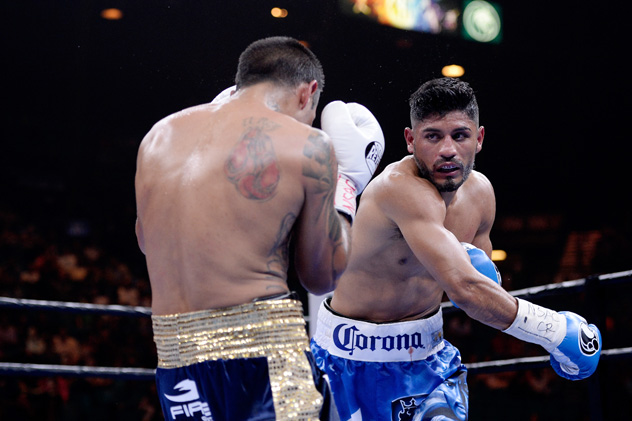 Abner Mares throws a right vs. Arturo S. Reyes during their featherweight bout at the MGM Grand Garden Arena on March 7 in Las Vegas. Photo by Harry How/Getty Images

A fight with Leo Santa Cruz has been on the mind of Abner Mares and fight fans for quite some time. Even when Mares suffered defeat for the first time at the hands of Jhonny Gonzalez in August of 2013, Santa Cruz was what he wanted more than anything else. And now he has finally landed the fight as the two Southern California fighters will square off at the Staples Center in a battle for Los Angeles on August 29.

And if you ask Mares (29-1-1, 15 knockouts), this fight is finally taking place because he has been persistent in asking for it on social media, in interviews and anywhere else that he can get the message out.

“I’m going to take a little bit of credit for this fight happening because I cornered Santa Cruz,” Mares told RingTV.com. “He can say all that he wants that he has been wanting this fight but I pretty much cornered him in a way that the fans got involved and pressured him to make this fight happen. We owe it to the fans and it’s even better that it is here in L.A.”

Mares admitted he had his doubts that the fight would happen in 2015. After a relatively subpar performance against Arturo Santos Reyes in March, where Mares told RingTV.com that he had fallen ill, he wasn’t too sure that Santa Cruz (30-0-1, 17 KOs) would face him. Things didn’t improve when Mares made himself available for a fight with Santa Cruz on the undercard of Mayweather-Pacquiao but was passed over in favor of the unheralded Jose Cayetano after Santa Cruz was left without an opponent until a little over a week before the event.

“I wanted it but I didn’t think it was going to happen because who wouldn’t want to fight easy fights and get paid well for them?” Mares says of Santa Cruz’ less than stellar opposition that he’s faced in his past few fights. The three-division titleholder believes that this fight could have happened sooner but Santa Cruz didn’t force Al Haymon to pull the trigger by accepting his challenge. “I think God gave us a mouth for a reason and he didn’t speak up. But I don’t blame him either. It’s the people that he has around him and I think his dad calls all the shots. I don’t talk bad about fighters but this fight could have been made before.”

Mares tells RingTV.com that he was slated to face Gary Russell Jr. in what would have been a highly anticipated featherweight clash when the call came that Santa Cruz was ready and willing to face him. As much as a world title fight with Russell – who stopped Jhonny Gonzalez inside of four rounds back in March – interested Mares, a showdown with Santa Cruz trumped all.

“I made the decision to face Santa Cruz instead of Russell because the fans in Los Angeles would rather see that fight,” Mares explained. “It will be exciting.

The fight, which will be broadcast on ESPN as part of the Premier Boxing Champions series, is personal for Mares because both fighters call Los Angeles home and a rumored fight between the two has generated a great deal of interest from fight fans for the past three years when Santa Cruz was marching through opponents and it appeared that the two were on a collision course. Their styles were sure to yield fireworks and it was just a matter of when these two worlds would finally collide. However, the path to Santa Cruz-Mares hit a speed bump when Gonzalez surprisingly stopped Mares in the first round of their featherweight clash. But Mares believes that the timing couldn’t have been better as he’s a far more seasoned fighter who takes his craft seriously than he was when he faced Gonzalez. That experience will be part of the reason why he comes up victorious on August 29.

“I’ve faced better opposition and been a three-time world champion against better competition,” Mares said. “I’ve been in wars, I’ve been knocked down and I know what defeat feels like. He doesn’t. I think I have a lot of reasons why I’m better than him. I know I have that but it’s all about the mentality. I’m more experienced and it will show on August 29.

“This fight was made for me. It’s my time, my fight and my show. I just have to go out there and execute.”