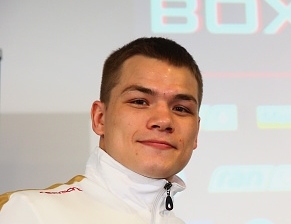 Russian pressure-fighter Fedor Chudinov has sustained a broken nose in sparring which has led to the postponement of his “regular” WBA super middleweight title defense against popular British puncher Frank Buglioni. The fight was to have taken place on July 24 in London, England.

Editor’s Note: THE RING only recognizes Andre Ward as the WBA titleholder at 168 pounds.

A bitterly disappointed Buglioni now awaits a new date for his clash against THE RING No. 9 rated super middleweight, but will still be showcased on July 24 against an unknown opponent.

“It’s frustrating to know that I have to wait a little longer to get to Chudinov,” said the 26-year-old. “I would question how he broke his nose if he was wearing the correct head gear with bars to protect it. My training has been perfect up to now and it’s a shame that this has happened.”

Promoter Frank Warren echoed those sentiments, “It’s a real shame that Fedor has suffered a broken nose with only 2 weeks to go until the fight, but injuries happen. It doesn’t make it any easier on Frank, who has been training his heart out, but he will still fight on the show and Fedor is locked in to fight Frank next.”

Chudinov’s promoter Vlad Hrunov added, “Fedor is devastated to have suffered this injury so close to the fight as he was looking forward to coming to England. When he has recovered we will honor our obligation to fight Buglioni.”