Thurman-Collazo should have gone to the cards 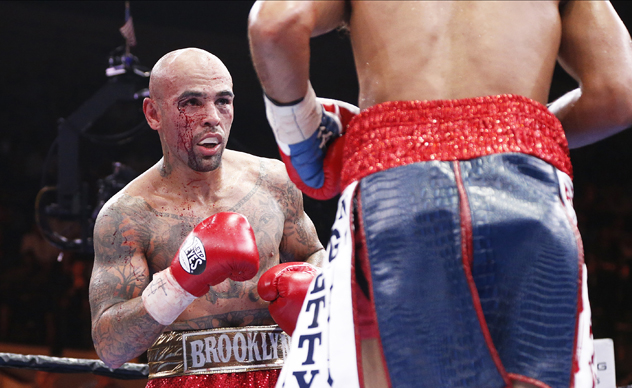 Strange ending to the Keith Thurman-Luis Collazo fight on Saturday, maybe not so strange when you consider our sport is the theater of the unexpected.

In case you missed it, Keith Thurman was winning his fight against ultra-vet Luis Collazo in Tampa, but not without a hiccup on the way. A counterpunching Collazo hit Thurman with an accordion special, a left to the body timed to perfection and placed nastily well in the fifth.

Thurman winced but stayed aloft, and kept on soldiering on. But a cut on the right eye of Collazo had the doc and the ref taking a hard look at the New Yorker after round seven. The doc went to his corner, and assessed the slices, which had been deemed caused by an accidental clash of heads earlier on.

Here’s what I heard in the corner, in Tampa, on a PBC on ESPN card:

The doc recommended the fight be stopped, the ref activated his recommendation and it was announced that Thurman was the winner, via TKO, because Collazo couldn’t continue. Thing is, most of us expected we’d see the cards read, after the completed rounds, because the impaired eye was caused by an accidental butt. In other words, Collazo indicated his sight was compromised, but he didn’t say, “I quit.” And even if he did, that’s immaterial, because a Thurman blow didn’t cause the cut.

The unified rules say that in that case, after four rounds complete, the fight result should be determined by the tallying of the scorecards to that point.

1. If an accidental foul causes an injury severe enough for the referee to stop the bout immediately, the bout will result in a NO DECISION if stopped before four (4) completed rounds. Four (4) rounds are complete when the bell rings signifying the end of the fourth round.

That is, in my opinion, what should have occurred here…

Now, typically, a doc assesses, and is aware of the regulation and tries to gauge the boxers’ fitness to continue. If they cannot continue, the onus isn’t upon the boxer to phrase that in such a way to ward off a TKO loss. The injury was caused by an accidental foul, and after four rounds, the cards should be read.

I checked in with Collazo on Sunday. First off, he said he was feeling OK. He had 15 stitches on two gashes on his eye, and, he told me, he was OK with how the doc made the call at the end. “That’s how they called it,” he said. “Can’t fight with him.”

He agreed with my reasoning that quite likely the result should be a technical decision, but “at the heat of the moment I’m not thinking about any of that.”

And we should all remind ourselves, and that goes for commentators as well, none of us are in the fighters’ shoes, and know how hard it might be to do battle with one functional eye. Also, it isn’t immaterial, maybe, in the end because rules and regulations are there for a reason, to insure an even playing field and structure.