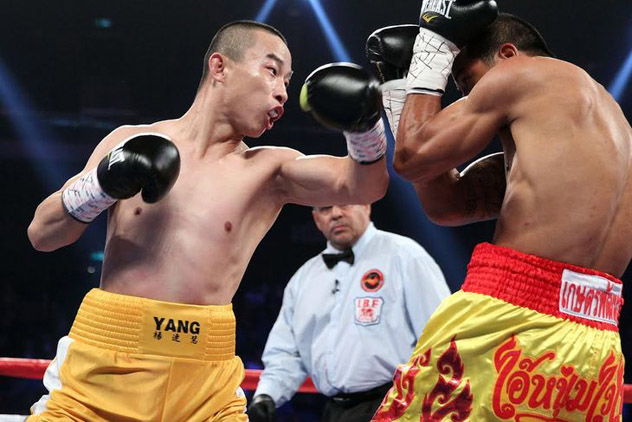 While stockholders around the world were getting hammered by a market crash in China on Wednesday, trainer Freddie Roach was decidedly bullish about his newest investment, Ik Yang.

Yang, a 30-year-old junior welterweight from Da Lian, China, will face undefeated Argentine Cesar Cuenca on July 18 in Macau, with the vacant IBF title on the line.

“Yang may be the most popular fighter in China today and for one reason, he brings it,” said Roach in a press release issued by Top Rank, Yang’s promoter. “Yang has only gone the distance once in the last four years. The fans love him because he backs up his cocky attitude with devastating results. He has one-punch knockout power in both fists.”

Yang (19-0, 14 knockouts) has become a regular attraction at the Cotai Arena in Macau, having fought there first on the Manny Pacquiao-Brandon Rios card in 2013 and three other Top Rank events since then. This will be Yang’s first headlining role and, should he prevail, he will become China’s second fighter to win a world title (the first was Xiong Zhao Zhong, who won the WBC strawweight title in 2012).

“I am in the best shape of my life and have trained harder than all my previous fights,” said Yang “I have had a great training camp with Freddie and Justin (Fortune) and my sparring partners have really pushed me to the limit.”

Yang’s last fight, his first 12-rounder, was an entertaining sixth-round TKO of Thailand’s Patomsuk Pathompothong, in which the swaggering Chinese banger closed the show on a series of flush power shots.

“He is as much fun to train as he is to watch,” said Roach. “It’s no secret that we are training for a knockout victory. Yang knows he’s in with a master boxer and the only way to beat a guy like Cuenca is to pressure him. And when we get him on the ropes Yang is going to bang away.”

Cuenca, on the other hand, takes an entirely different approach. Though undefeated in 47 fights, he has scored only two knockouts.

This will be Cuenca’s first bout outside Argentina, with his most recent being a unanimous decision over Albert Mensah 14 months ago. That fight made him the No. 1 challenger for Lamont Peterson’s IBF title but Peterson instead chose to fight Danny Garcia at a catchweight and was stripped.

The Macau card will also include the return of former four-division titleholder Nonito Donaire (34-3, 22 KOs) who will face France’s Anthony Settoul (20-3, 8 KOs) in a 10-round junior featherweight bout.

Donaire, who is rated No. 4 by THE RING at 122 pounds was last in the ring with a second-round knockout of William Prado, which followed “The Filipino Flash’s” loss to Nicholas Walters in October 2014. Settoul, a former European bantamweight champion, has won one six-rounder since losing his title to Omar Lamiri by majority decision.

The Yang-Cuenca fight will be streamed live (along with most of the undercard) in the U.S. via www.toprank.tv, beginning at 6:00 a.m. ET.