Cunningham says Fury’s got a shot 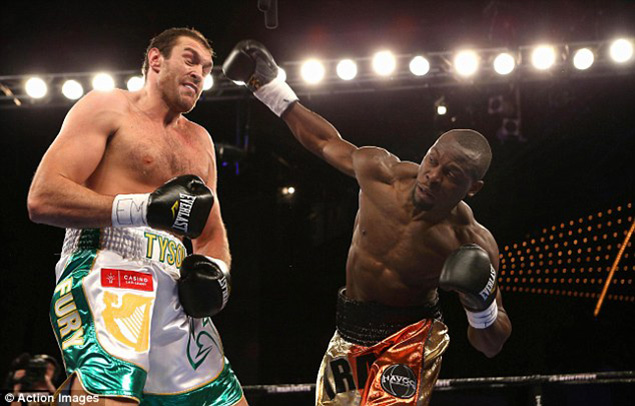 They best get one of their sturdiest rings ready for the October 24 heavyweight title collision in Germany, seeing as how the two principals are NBA-sized pugilists.

Wladimir Klitschko, at 6-foot-6, usually weighing in the lows 240s, will be looking up at a foe, a rarity for him, when he gloves up against Tyson Fury, a tall and talkative Brit who goes 6-foot-9, 250-plus pounds.

The fighting skyscrapers will tango in Dusseldorf, it was announced on Monday.

“We’re very happy to reach an agreement with Hennessy Sports for this great heavyweight title matchup,” said Tom Loeffler of K2 Promotions, promoter of Klitschko. “It’s a very significant fight. There’s lots of interest in this fight, it’s another big international event,” he told RING. “This is the sixth undefeated fighter Wladimir has faced in his last seven fights. Fury brings a big punch and a big mouth and it will be a great promotion.”

THE RING magazine, WBO, WBA, IBF and IBO titles, now around the Klitschko waist, will be vied for; Klitschko will be seen as a favorite, being that he hasn’t lost since 2004, when he was still a chinny type, and Lamon Brewster bettered him. He did remedial work under Emanuel Steward, and has mastered the “art” and science of a not-always-fan-friendly method of blunting an opponent’s aggression with clinching. At 64-3, and a pro since 1996, he holds a wealth of experience in his pocket to combat the taller Fury, a 24-0 boxer who proudly points to his gypsy lineage and turned pro six years ago.

Fury’s road has been paved with a collection of lesser lights who crumpled as he rained down power launches on them; Christian Hammer was the last one to get stopped out. Before that, the hitter with Irish roots, who lives in England, bettered trial-horse Dereck Chisora.

Steve Cunningham, the comparatively undersized American hitter, tested his whiskers when they met in 2013, and Fury managed to pass the test and score a TKO. Cunningham told me he thinks Klitschko should be favored in this one, but “Fury is 6-9, has a good gas tank, he’s always got a chance. I’ve been in camp with both, he works hard, he’s not just a loud-mouthÔÇªbut he’s in against a tested, world champion. And, I have noticed, Wladimir does better against little guysÔÇª”

The contest will be screened on HBO.

Klitschko, who turns 40 in March, hasn’t been keen on discussing records he’s bearing down upon. His last win, which came against Bryant Jennings in NYC, was Klitschko’s 18th consecutive world title defense (Louis is tops with 25, Larry Holmes second at 20) and his 22nd straight victory. His title reign length is second in heavyweight history only behind the great Joe Louis, but the Ukrainian-bred boxer shies away from compare and contrast with the Brown Bomber. The Klitschko-Fury fight will be the 28th title bout for Wlad, and he is tied with Louis, at 27 apiece.

He will train in the US–he lives in the States, in Florida, with his missus, the actress Hayden Penettiere, and their baby girl, Kaya– and also Austria. Prior to the Jennings bout, he told writers that doing diaper duty would maybe make him an even more devastating puncher, as that’s what his older brother, ex champ Vitali told himÔÇªbut his effort against the Philly boxer didn’t produce much in the way of fireworks or extreme anticipation for his next tangle. One figures the trash-talking superstar—superstar in the arena of talking smack, that is–Fury will goad Wlad, get under his skin, and possibly spur him to take more chances, and gun for a stoppage.

The site of the brash Fury falling like a majestic pine is something that will make this event one of the fall’s premier fistic pairings. We can expect his mouth to up the expectations; he’s already said he won’t soil himself as brash-talker David Haye did when stepping in with Wlad, and we can be assured this mixture of profane chest thumping, mixed with a public profession for a Christian faith, will make for an entertaining buildup to the tangle.