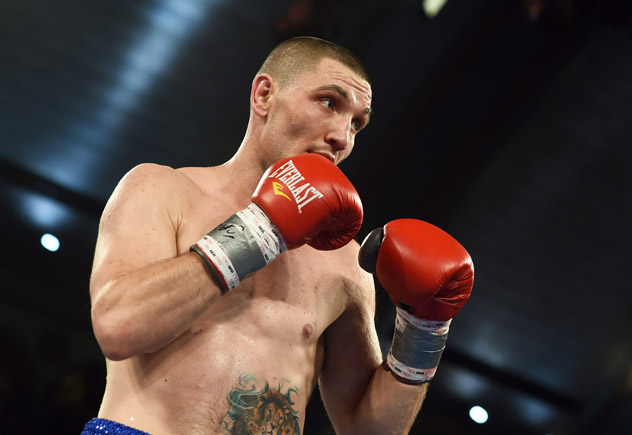 PHILADELPHIA – This wasn’t in the script. Paul Parker, from the burgeoning fight factory of Toledo, Ohio, was a gangly undefeated cruiserweight in the ring on 10 days notice and someone who was supposed to pose little threat to powerful Ukrainian Vyacheslav Shabranskyy.

That changed about halfway through the first round of the Golden Boy Live! show on Fox Sports 2 at the 2300 Arena in South Philadelphia on Tuesday night.

It was Parker, “the opponent,” looking down on Shabranskyy, struggling to get up after a pair of Parker right hands put the unbeaten prospect down. And there was “Lion Heart” again literally hanging on for dear life and his undefeated record in the balance hugging Parker’s waist about 30 seconds later. Shabranskyy couldn’t stand, couldn’t punch, and couldn’t lose, either.

Shabranskyy regrouped after two first-round knockdowns and wound up stopping Parker (7-1, 4 knockouts) at 2:36 of the third round, when referee Gary Rosato stepped in and waved it over with Parker’s back to Shabranskyy (14-0, 12 KOs).

“It was a little scary there in the first round,” admitted Manny Robles, Shabranskyy’s trainer. “He had to stay calm and relaxed. He went down, held, just do anything you can to get through the round and he did. He grabbed and did whatever he had to do, and he did. Vyacheslav did show something. He got up twice. Who gets up from a punch like thatÔÇöand it was the same punch that put him down. He came back to the corner and I wanted him to look me in the eye and I asked him if he was okay. I told him what happened in that first round to let go. We wanted to jab and get under.”

In the second round, Shabranskyy began using the jab and working the body. It set up the decisive third round.

Shabranskyy and his team had no idea what to expect from Parker. They had no film of him and he took the bout after more than 10 opponents rejected the fight or fell out.

“When push came to shove, I went for it in the first round and punched myself out a little,” Parker said. “In the second round, he put more pressure on me and in the third round, I was still trying to get my composure. He hurt me. I’ll admit it. He hurt me in the third round, and as a professional, I should have taken a knee. I knew what the deal was. I came as an opponent and I wasn’t supposed to win. I thought the stoppage was premature. It was definitely premature. To compare what I did to him in the first round, to what he did to me in the third, there’s no comparison. I would like to get a rematch, but there’s no way they’ll let that happen.”

On the undercard, light heavyweight prospect D’Mitrius Ballard (9-0, 7 KOs) won a six-round decision over Josue Ovando (13-6-1, 10 KOs). But Ballard was far from pleased by his performance.

“I’m not pleased at all, I know I can fight better and I’m more skilled than I showed,” Ballard said. “I’m satisfied with the outcome, but not pleased with what I did. My coach tells me you’re not going to always have great nights, and this wasn’t one of them. It was just a bad day in the ring. I think I learned I need to be a better boxer and changing the gears up. I was trying for the knockout and it doesn’t matter who you fight, you can’t throw everything into getting the knockout.”

“I felt good, I felt strong, this is probably the last time I’ll fight six rounds,” Roach said. “I did feel I was getting stronger as the fight progressed. I sparred more than six rounds. But I need to improve my defense, and I should have moved my head more and stand there in front of him. I have to move more. I want to move to eight rounds and stay at lightweight.”

Other results included lightweight Victor Vasquez (19-9-1, 9 KOs) stopping Osnel Charles (10-14-1, 1 KOs) in the fourth round, and super featherweight Kevin Rivers Jr. (12-0, 9 K0s) beating Luis Ruiz Lizarraga Jr. (5-5-1, 2 KOs) by third-round stoppage. One of the more intriguing fights of the night was the super featherweight clash between Tyrone Luckey (6-4-2, 5 KOs) and Gang Yong Kim (4-2, 0 KOs). Luckey won a fourt-round decision, but not after each fighter got up from knockdowns.