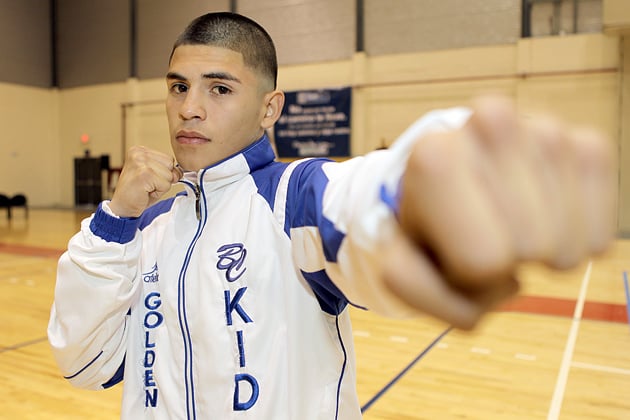 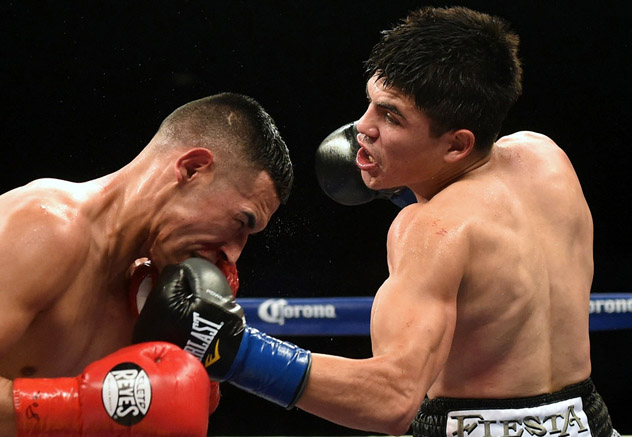 Best night of pro career: In February De La Hoya won an eight-round shutout decision against former world-title challenger Manuel Roman. He believes it is his most impressive performance to date.

“My best fight was against Manuel Roman,” De La Hoya told RingTV.com through Cecilia Zuniga of Golden Boy Promotions. “He had a lot of experience as a fighter, he is a former world-title challenger who fought against Leo Santa Cruz and Randy Caballero, who are world champions. Beating him was re-assurance for my career so far.”

Worst night of pro career: In his last fight, in May, De La Hoya again won every round, outpointing Ramiro Robles. However, looking back it’s not a performance he is happy with.

“My most recent fight, I wasn’t very comfortable with the fighter,” he said. “He fought dirty, that wasn’t something I was expecting.”

Next fight: De La Hoya will make his third start of the year when he takes on Jose Estrella at the Belasco Theater in Los Angeles on Thursday night as part of Golden Boy’s “LA Fight Club” on Fox Deportes.

Estrella (14-6-1, 10 KOs) hails from Tijuana, where many of his fights have taken place. Last time out Estrella traveled to Northern Ireland where he lost a 10-round decision to Jamie Conlon. This will be his first fight in America.

Why he’s a prospect: De La Hoya enjoyed a solid amateur career, competing in Mexico where the highlights included winning a National title in 2011, a silver medal at the Independence Cup, where he lost to blue-chip prospect Oscar Valdez in the final (Valdez held a 2-1 advantage overall in the amateurs). He also fought at the 2012 World Youth Championships.

He elected to join the pros in the fall of 2013, signing managerial forms with his cousin, Joel De La Hoya, and a promotional pact with Golden Boy Promotions fronted by another cousin, Oscar.

It’s always going to be a hard act to follow in the giant shadow of Oscar, something Diego is well aware of, but a path he knows he has to walk.

“Yes, I do feel a lot of pressure,” said the 20-year-old. “When I fight someone they really want to beat me because they have the association with my last name. There is a lot of pressure but I feel I can handle it.”

While other fighters with famous surnames seem content to dine out on their fathers’ boxing success, Diego doesn’t want to play that card.

“I’m proud of my last name and what Oscar’s accomplished as a fighter,” he said. “But I’m going in the ring now and although the last name will open up opportunities for me I have to be smart and show people I am a great fighter and show people all of my skills, because if the doors open there’s a lot of pressure and if I don’t fulfill those expectations there’s no point. I want to build my own legacy and prove to people I’m also a good fighter.”

As a pro De La Hoya has sparred with Caballero, Tim Bradley and Jessie Magdaleno.

He feels his greatest strength inside the ring is his speed: “My greatest asset is that I can move, I can move quickly.”

Why he’s a suspect: It is still early in the youngster’s career, he’s still finding his feet. He doesn’t appear to be a big puncher but makes up for that in part with his boxing skills.

We need to see how he reacts to the pressures of carrying one of boxing’s biggest names. The target on his back is huge and it’s something he’ll have to get used to as he continues to develop.

De La Hoya says he needs to work on his defense more.

Story lines: He was born in the Mexican border town of Mexicali two years after Oscar’s Olympic gold medal success.

“My family are a big boxing family, so that has always been present in my daily life growing up,” he said. “At first my dad put me in boxing, it wasn’t something that I personally wanted but at 6 years old I fell in love with boxing. But I had been boxing before that.

“My passion grew for the sport and I committed myself to it. At 15 years old I decided to commit myself to the sport full-time.”

Unsurprisingly he looked up to two boxers growing up: “They’re both from Mexican heritage. The first one is Julio Cesar Chavez and then my cousin, Oscar. Particularly Oscar because he’s fought battles in the ring and also out the ring and knows how to get up.”

He traveled with his family to Las Vegas to witness both De La Hoya-Chavez fights: “I was very young, I don’t remember a lot about it. I do remember the whole family went to watch the fight and of course they were rooting for Oscar because he’s part of the family, but regardless there was still a lot of Mexican pride and support for both fighters.”

As for the Golden Boy himself, Oscar De La Hoya is very excited about how his young relative has progressed so far:

“Diego De La Hoya has impressed at every step since making his pro debut less than two years ago,” Oscar said. “He has demonstrated he has heavy hands in the ring, knocking out most of his opponents, and remains undefeated today.

“At just 20 years old, he is beginning to make a name for himself with impressive wins as a top prospect, and I believe he has the ability to become a champion someday.”