How low would Gennady Golovkin go for Floyd Mayweather Jr.? 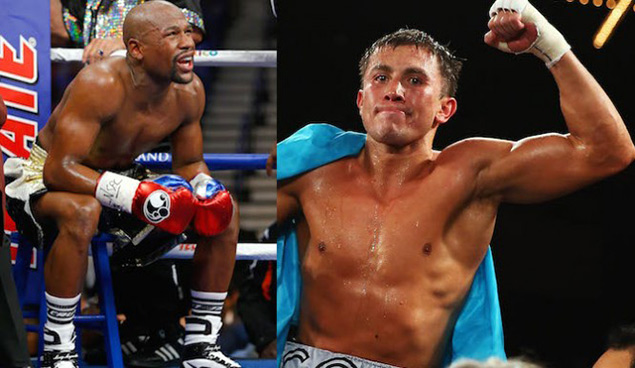 Floyd Mayweather opened the door just a tad more to fight Triple G, the fearsome banger from Kazahkstan, on Monday.

“Money,” who has been out and about wearing his promoter hat, as he headed up the Saturday scraps in Vegas topped by Broner-Porter, told videographer Marcos Villegas that he’d be too cerebral for the middleweight with the angel face and hands constructed by the devil.

Even though he’d be the smaller man, Floyd implied, he’d be the best ring general if he were to tangle with Golovkin.

Now, many if not most Floyd fans take issue with the concept of their guy fighting Golovkin. He’s too small, they say. He’s really a welterweightÔÇªbut, I could tell them, one who’s held belts at 154. (I have a hard time keeping track of and, I admit, caring, over who is holding what belts, because they give them up, they have them stripped, etc.)

People keep on asking Floyd, when he’s out and about, about fighting GGG, more so than any other potential matchup. He’s said different things to different folks when touching on the subject; on June 18, he told Fight Hype, “Golovkin, he goes out and does what he has to do…at my weight right now, you know, I walk around at 150…148, 150….probably be a good fight for me, probably would, but you know, I’m almost finished.”

Interesting, if for no other reason than his Twitter Army has dismissed as poppycock any talk of a Mayweather-Golovkin scrapÔÇªand now their leader seems to be entertaining the notion, if halfheartedly.

I reached out to Golovkins’ promoter, Tom Loeffler, to see if we were any closer to to seeing Mayweather versus the single most talked about potential foe out there.

What about it, Tom? Could or would Gennady carve and starve down to 148 to get a Floyd fight?

“If it’s a realistic possibility, Gennady would fight at 154, Floyd has two titles there, after all,” Loeffler said. “And if you’re the best ever. I don’t see an issue with that. Floyd is not obligated to do the fight, of course, but Gennady would be the highest profile foe out there, other than De La Hoya.”

OK, Floyd is Floyd, he’s going to try and tilt the field his way. How low could or would Gennady go? “154, I think that’s the lowest realistic weight,” he told me.

Those seeking to portray the Golovkin vs. Mayweather fight as the height of ludicrousness say that Golovkin is too damned big. But he’s not a big middleweight, Loeffler notes; he has weighed 159 his last few fights, and in fact, no, he doesn’t bulk up to light heavy on fight night. He’s around 168 on fight night, the promoter said.

That said, I think it’s much more likely we see Golovkin against another boxer who has in fact expressed willingness to fight him, David Lemieux. But the talk and interest of a Mayweather-Golovkin fight is in fact gaining traction, not the opposite. If the masses call for it, maybe we shall receive.