Sonny Fredrickson ready for his coming out party on BET 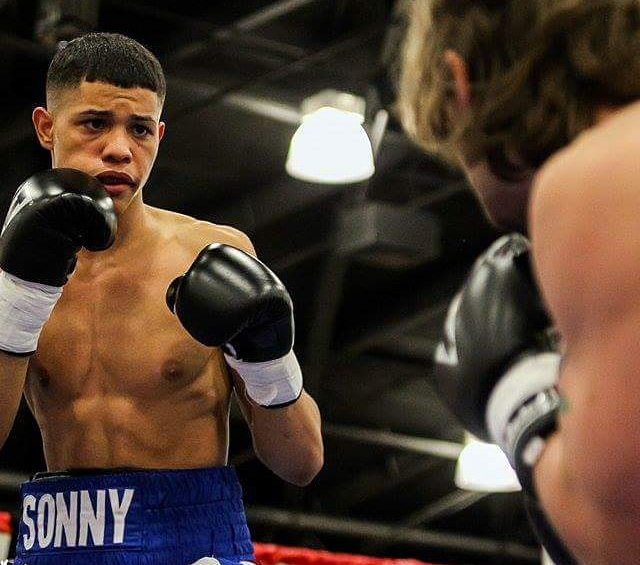 There’s a large pad lock that secures the front doors of the Glass City Boxing Gym, in Toledo, Ohio. The latch has a distinctive big blue key that’s hard to miss on Lamar Wright’s keychain.

Only this one morning, as the trainer looked down at the jiggling mess of keys in his hand, something was missing. The big blue key. Something else was also glaringly wrongÔÇöhe heard the ding, ding, ding of the automated bell, along with the tap, tap, tap of a speed bag, emanating from inside the gym.

There were no cars in the gym’s parking lot. Who the hell can be in there, Wright thought to himself? At 8:00 a.m.? Did someone steal his key to sneak inside the gym? Did someone lock themselves in there?

Wright was right about one thing. Someone did steal his key to work out all right: Sonny Fredrickson.

Fredrickson was 17 then, making sure he got some extra work in prior to an amateur tournament. It’s that sense of work ethic, along with his lean, 6-foot-2 frame on a lightweight that has forged an 8-0 (5 knockouts) pro record and sterling 120-8 (60 KOs) amateur mark.

Fredrickson will make his national TV debut this Saturday night on BET on the Andre Ward-Paul Smith undercard from Oakland, California, in a six-rounder against 30-year-old Juan Santiago (15-12, 9 KOs).

“As a trainer, you put into these kids what they give out, and Sonny works so hard, he gives me 115-percent and I have to give 115-percent, too” said Wright, who’s been working with Fredrickson since the youth first put on boxing gloves. “Sonny has always been that way. We have to kick him out of the gym. He’ll have the fight this Saturday and be right back in the gym on Monday. That’s the way he’s always been. It’s a great feeling to know we’ve done everything, covered everything and are well prepared.”

Santiago is the most experienced fighter Fredrickson will face. Santiago has gone 10 rounds with former champ Juan Diaz and has been in with future star Felix Verdejo.

Fredrickson was a multi-sport athlete who gave up everything his sophomore year of high school to pursue boxing fulltime. He had no relatives that boxed. He grew to love the sport through watching clips on the ESPN Classic network and benefitted from proximity. A new gym just happened to open down the street from where Fredrickson lived.

“But I ask my mom to box,” Fredrickson said. “That wasn’t an easy thing, at first. My mom saw how much I was interested in boxing and we worked on it. Once I started, I fought a lot. I also kept growing. I’ve grown an inch taller each of the last four years. Hopefully, I’ve stopped growing. I had to keep getting new clothes.”

Fredrickson can be defined as a boxer-puncher, with explosive power in both hands. He is one of Roc Nation’s budding prospects they’re pushing.

Though this Saturday Fredrickson, or “Pretty Boi,” knows he’s not getting any breaks with Santiago. This will be a new world that the 20-year old is venturing into.

“He’s right handed and he has a lot of experience,” Fredrickson said. “I have sparred with a lot of experienced guys, but I know facing a guy in the ring is different than sparring. I’ve been training real hard for this fight. I’ll be ready.”

There was never any doubt of that.