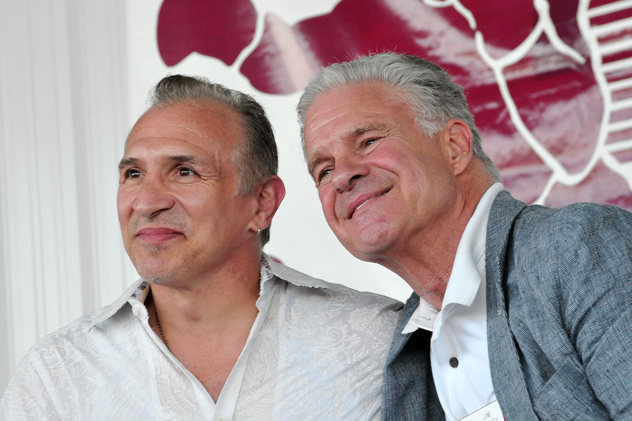 CANASTOTA, N.Y. – Jim Lampley grew up listening to Don Dunphy. He was blocked from doing his favorite sport in the early part of his broadcasting career, which began at ABC, by the egomaniacal Howard Cosell. Although he was part of a three-man booth for “Monday Night Football,” Cosell preferred to work alone at ringside, which he considered his exclusive province.

Now Lampley, silver-haired and no longer sports television’s boy wonder, is 66 and widely regarded as the most accomplished blow-by-blow announcer ever to have called boxing matches for TV, having matched or surpassed the impressive bodies of work compiled by Cosell and Dunphy. He has been the rock of HBO’s boxing telecasts since 1988, anchoring a lineup that has included at various times such high-profile color commentators as Larry Merchant, George Foreman, Sugar Ray Leonard, Lennox Lewis, Roy Jones Jr., Emanuel Steward, Andre Ward, Bernard Hopkins and Max Kellerman, and his steadying hand and smooth delivery have benefited each and every of his colleagues.

“Every one of those men is either already enshrined here, or someday will be,” said Lampley, whose turn at the podium, along with that of former WBA lightweight champion Ray “Boom Boom” Mancini, was the highlight of the 26th annual International Boxing Hall of Fame induction weekend here Sunday afternoon in this picturesque central New York village.

Lampley also urged that another co-worker, HBO’s unofficial judge at ringside, Harold Lederman, soon be inducted into the IBHOF, the sort of endorsement that should significantly boost Lederman’s candidacy. As he had grown into a role that now fits him as comfortably as a favorite sweater, Lampley’s opinion matters with the fight game’s cognoscenti, even among those who work on the other side of the aisle, at Showtime.

It is indicative of Lampley’s value to HBO’s boxing telecasts that he was not given all four days of the Hall of Fame festivities to enjoy one of the capstone moments of his broadcasting career. A winner of four Emmys and an announcer for a record 14 Olympic Games, Lampley’s bosses at HBO had him calling the action Saturday night at the Madison Square Garden Theater, with Nicholas Walters scoring a 12-round unanimous decision over Miguel Marriaga and rising lightweight contender Felix Verdejo outpointing Ivan Najera over 10 one-sided rounds. 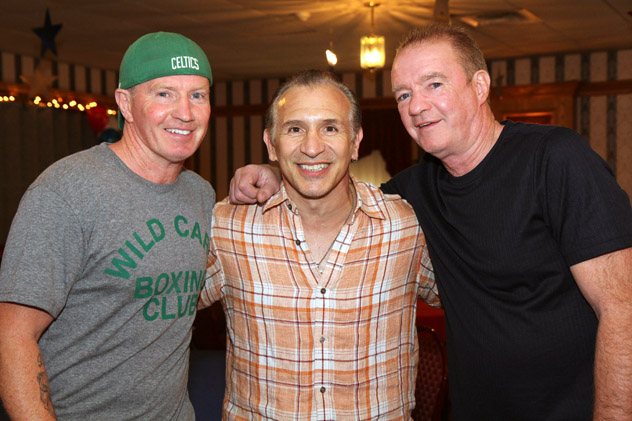 As is the case with Mancini, whose devotion to his father, the late lightweight contender Lenny “Boom Boom” Mancini, is well documented, Lampley’s attachment to boxing owes at least in part to his dad. Except that his dad wasn’t around when the young Jim experienced his youthful epiphany.

“I was introduced to boxing in December 1955 by my mother in Henderson, North Carolina,” Lampley said as another large crowd listened in rapt attention. “My father had died of cancer the preceding year. My mother took me to a Christmas party at a friend’s home. She marched me out of the living room down the hallway to the hostess’ bedroom, turned on a black-and-white television and told me, `Sit down. You’re going to watch the Friday Night Fights, Sugar Ray Robinson vs. Bobo Olson. This is what you and your father would be doing if he were still here.

“Don Dunphy called the fight. Robinson scored a knockout win. I was enthralled and immediately began visualizing myself as Carmen Basilio, Gene Fullmen, Yama Bahama, Dick Tiger, Joey Giardello, Hurricane Carter – all the star television fighters of that era. Then in 1960 I watched the Rome Olympics and I fell in love with Cassius Clay.

“All through the 1960s and into the ’70s boxing was my favorite sport. I went to junior high school and high school in Miami, and a couple of times my mother drove me 25 miles from our home out in the swamps to Miami Beach so that I could see the Fifth Street Gym. I shook hands with Angelo Dundee.”

Mancini fell in love, too – with the idea of finishing the mission that his dad started, but was unable to complete after he was hit by shrapnel from German mortar shell in France in 1944. He would adopt his father’s ring persona and his nickname, his intensity ratcheted up by Lenny’s tales of not only his star-crossed career, but of all the fighters to have represented their Rust Belt hometown.

“Everything I am, everything I’ve ever been and everything I ever will be is because of two things: my family and my city of Youngstown, Ohio,” Mancini said. “I am a product of that city. I love my city, I love the people. They carried me a lot further than I wanted to go at times. They were there for every fight. Those people are the reason for where I am today.”

Incredibly, Mancini as an amateur was a member of the same Youngstown team that included future world champions Harry Arroyo, Greg Richardson and Jeff Lampkin. 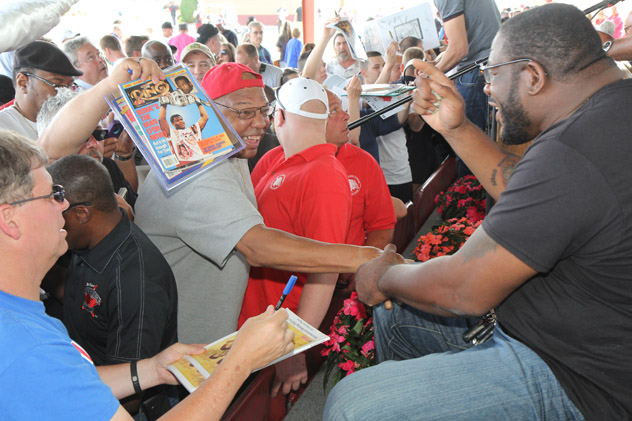 Bowe, known as “Big Daddy” during his career but now an NFL nose tackle-sized bigger daddy, was playful during his time at the podium. He credited Hall of Fame referee Joe Cortez, who was sitting in the row behind him on the dais, for his points victory over Evander Holyfield in the first of their three classic fights. The story might or might not be true, but it sounded good nonetheless.

“Holyfield knocked me down,” Bowe said. “I swear to God, this is what (Cortez) said to me. He was counting. `One. Two. Three. Get your punk ass up.’ I got up and won the fight. Thank God for Joe Cortez. If I fight again, he needs to be the referee.”

Hamed did not make the trip from England, citing the illness of his wife, Eleasha.