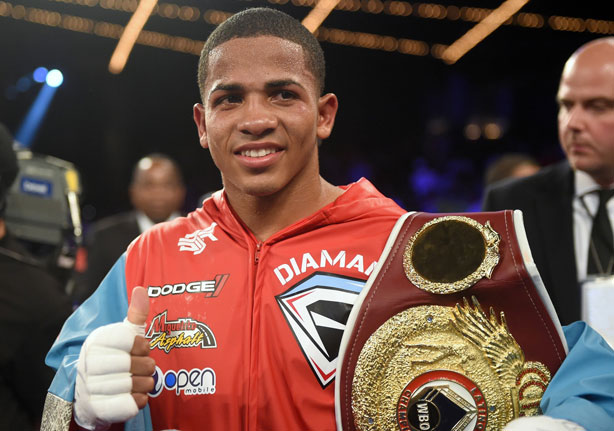 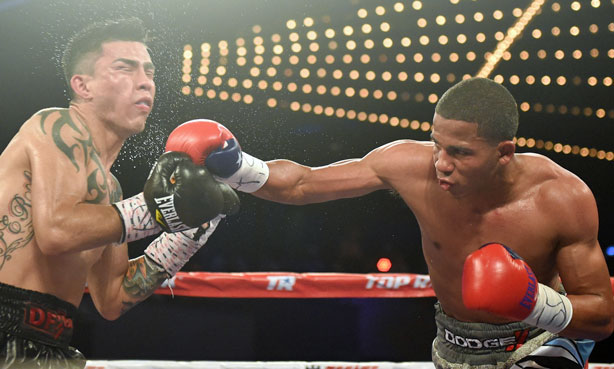 Felix Verdejo: I want to avoid being overly hyperbolic because Verdejo, only 22, is still developing as a fighter. I can’t hold back entirely, though: I believe strongly that he has the talent to emerge as the best fighter in the world someday. Verdejo (17-0, 13 knockouts) dominated a very game Ivan Najera (16-1, 8 KOs) to win a near-shutout decision on the Nicholas Walters-Miguel Marriaga on Saturday at the Madison Square Garden Theater, just another demonstration of the Puerto Rican’s immense potential. I don’t see a weakness at the moment. Quick, athletic, powerful, fierce, smart, dynamic. Verdejo failed to stop Najera but that can be attributed at least in part to an injured left hand. And he lost his poise when Najera landed hard punches a few times, although those missteps were the result of his admirable fighting spirit. He’ll learn. I loved what I saw. Again, it’s too early to determine how far Verdejo will go. We’ve seen other “can’t-miss” young studs underachieve. So I’m only hypothesizing that he will become the best Puerto Rican fighter since Wilfredo Gomez. He has more power than Hector Camacho, he’s a better boxer than Felix Trinidad and he’s more complete than Miguel Cotto, who never had the athleticism and dynamism of Verdejo. I can’t wait to see how this plays out.

Wilder-Molina: Thank you Eric Molina. You turned what almost everyone thought would be a very quick knockout by Deontay Wilder into a fight that was fun to watch Saturday night in Birmingham, Alabama, not far from Wilder’s hometown of Tuscaloosa. The Texan scared the daylights out of Wilder fans when he wobbled the WBC heavyweight champ in the third round, although he inexplicably failed to follow up with enough urgency to give himself a shot at a stunning upset, and he refused to give up even when things got bleak for him. In the end, Molina (23-3, 17 KOs) went down four times and was stopped 1:03 into the ninth round of Wilder’s first title defense, only the second time Wilder (34-0, 33 KOs) has gone beyond four rounds. Should the third round and Wilder’s inability to put Molina away earlier be alarming? Not really. First, Molina is a pretty good fighter with good power. Second, we all know that Wilder is still a work in progress in spite of the fact he holds one of the major titles. He admitted it himself after the fight. He’s an improving boxer with crushing power but, yes, he’s vulnerable. That means his reign as a heavyweight titleholder might not last very long. But it definitely won’t be boring.

Jose Pedraza: First, I need to say that Pedraza (20-0, 12 KOs) turned in a terrific performance against Andrey Klimov (19-2, 9 KOs) to win a one-sided decision and the vacant IBF junior lightweight title on the Wilder-Molina card. I don’t think he’s in Verdejo’s class but he appears to be an excellent all-around boxer, one with a very bright future. The issue I have with him was the manner in which he fought in the final few rounds, when he was told not to take risks because he presumably had a big lead on the cards. The late, great Emanuel Steward always pushed his fighters to finish the job against wounded prey, as a beaten, bloody Klimov was. The reason is simple: That’s what the fans want to see, that’s how you build stars. Fans undoubtedly were impressed with Pedraza’s performance but left with an empty feeling when he cruised to a decision victory the last few rounds. OK, Pedraza can’t be faulted too much for listening to his cornermen; that’s what he’s taught to do. And, yes, the first priority was to win what would be his first world title. I get all that. I simply believe he could’ve taken a bigger step in his career if he at least would’ve tried to score a knockout, particularly because he was in no serious danger. Steward would’ve agreed with me.

Walters is just too big for other featherweights, particularly when he fails to make weight. The Jamaican was a pound over the limit the second time he weighed in Friday, which cost him his WBA belt. I liked Marriaga’s effort but he couldn’t hurt Walters – who outweighed him by 10 pounds on fight night – and absorbed too many punishing shots, including many vicious left hooks to the body. Thus, it was no surprise that Walters won 117-110, 118-109, and 119-108 on the cards. What now? He reportedly will move up to 130 pounds. It will be interesting to see whether he maintains the strength advantage he has had over his opponents. ÔÇª Puerto Rican fans must be pleased at the moment. Their biggest star, Cotto, manhandled Daniel Geale last weekend and two future stars, Verdejo and Pedraza, looked fantastic on Saturday. The recent successes underscore Puerto Rico’s position as pound-for-pound king of boxing. Only 3,620,897 live in the island nation. ÔÇª Erislandy Lara (21-2-2, 12 KOs) pitched a shutout against Delvin Rodriguez (28-8-4, 16 KOs) on Friday in Chicago. No surprise there. And Lara failed to make a significant statement in the process. No surprise there either. Lara is a few classes above Rodriguez; he should’ve stopped him. ÔÇª I’m not sure what to write about Artur Beterbiev (9-0, 9 KOs) other than he’s an absolute beast, as he demonstrated again by stopping a brave Alexander Johnson (16-3, 7 KOs) on the Lara-Rodriguez card. I think he’s no more than one or two more fights away from being ready for anyone. …

Lee Haskins (32-3, 14 KOs) gave fans in his hometown of Bristol, U.K., something to remember on Saturday, an exciting sixth-round knockout victory over Ryosuke Iwasa (19-2, 12 KOs). Haskins essentially ended matters with a crushing left to Iwasa’s face. The Japanese fighter was able to get up but was mauled immediately and the fight was stopped. Haskins won the interim IBF bantamweight title, meaning he’ll have to beat injured titleholder Randy Caballero or be elevated to full status at some point to become a true world champion. That said, it was the biggest step in his 12-year career. ÔÇª Sergio Martinez (51-3-2, 28 KOs) has announced his retirement. The charming Argentine’s career and body were never the same after he was injured in the 12th round of his victory over Julio Cesar Chavez, which was followed by a shaky victory over Martin Murray and the beating he took from Cotto. I trust he won’t be remembered for those fights. He was one of the most exciting – and best – fighters of the late 2000s and early 2010s. His one-punch knockout in his rematch with Paul Williams stands out but he gave us many more thrills in a sensational career in spite of the fact he was a late starter.