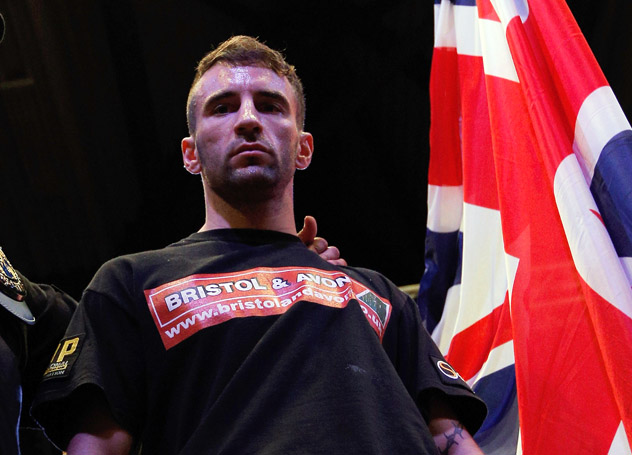 Japanese bantamweight Ryosuke Iwasa ventured outside his home country for the first time in his professional career on Saturday, but the decision to do so has backfired because he was savagely stopped in six rounds by home fighter Lee Haskins in Bristol, England.

Haskins, the reigning European bantamweight champion, broke through with a monster left hand in the sixth and the fight was essentially over before Iwasa hit the canvas. He rose unsteadily and was allowed to continue but a series of powerful combinations forced the referee’s intervention.

“It feels like a dream,” Haskins said when interviewed by Channel 5 in the U.K. “I’ve worked beyond hard for this fight. I’ve been waiting for this chance for so long and I wasn’t about to let it slip away from me.

“Everything came together tonight; what we’ve been working on in the gym. Iwasa has only been beaten by (Shinsuke) Yamanaka, the best bantamweight on the planet, and it took him ten rounds. I’ve done it in six and I’m ready for the best in the world now.”

Haskins, a reflex-based southpaw, got off to a great start in the opening round. He immediately found the range and landed sharp, accurate shots, with both hands, which reddened the Japanese star’s face. Iwasa, rated No. 10 by THE RING at 118 pounds, smiled and remained aggressive but he knew he was in a fight.

A straight left and a right hook from Haskins hurt the visitor in Round 2 and the Englishman continued to have his way, much to the delight of a feverish home support.

The crowd did hush momentarily in the fourth when Iwasa began to break through with flush power shots out of his own lefty stance. Haskin’s lateral movement deserted him and for the first time he became a target. The Englishman’s nose was bleeding heavily and his opponent was increasing the pressure as the session ended.

The fifth was a good round for Haskins but he was being made to work very hard and one could have been forgiven for thinking Iwasa was about to turn the tables. One perfectly timed back hand bomb put that idea to bed in a hurry.

With this result in the bank, Haskins and his team could target IBF bantamweight titleholder Randy Caballero, who remains inactive due to injury. Tonight’s match-up was an IBF eliminator and there will never be a better time for the Englishman to roll the dice at world level.

Iwasa (19-2, 12 knockouts) is part of the new wave of Japanese talent residing in the lower weight classes. His defeat to WBC titleholder Yamanaka, THE RING No.1 rated bantamweight, can be forgiven but tonight’s setback has seriously damaged his momentum.