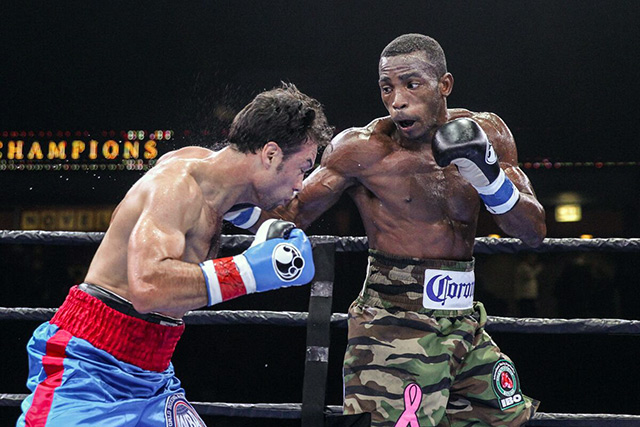 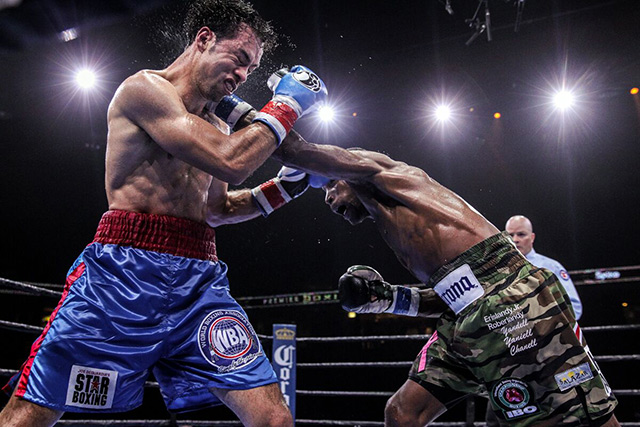 CHICAGO ÔÇö All night long, Delvin Rodriguez ate straight left hands from Erislandy Lara. The Cuban southpaw, who had his left arm holstered in at his side, perfectly unleashed the punch at the right times ÔÇö snapping Rodriguez’s head back each time in the process.

So when Lara landed yet another left hand that snapped Rodriguez’s head back in the final round, Rodriguez backed up and stood in the center of the ring. Standing with pride, he stretched his arms and nodded, inviting Lara to come at him.

The moment was indicative of Lara’s performance ÔÇö part brilliance and part maddening.

Lara (21-2-2, 12 knockouts) dominated ÔÇö and cruised ÔÇö to a shutout decision win over Rodriguez (28-8-4, 16 KOs) Friday at the UIC Pavilion in the main event of the Premier Boxing Champions series on Spike and defended his WBA junior middleweight title. Lara won every single round on the judges’ scorecards, scoring the fight 120-107.

“This was really a great performance tonight,” Lara said. “I was able to land my left. Delvin was really just trying to survive in there, so I knew what I was doing was working.”

There was not a round more brilliant for Lara than Round 6. The 32-year-old former amateur champ’s footwork befuddled Rodriguez, sending him to the canvas without even a punch, similarly to an NBA-like crossover “breaking the ankles” of the opposing player.

In that same round, Lara unleashed a perfect 1-2 combination that floored Rodriguez. Rodriguez rose at the count of eight, and made out of the round.

“It was very uncomfortable in there for me tonight,” Rodriguez said. “He was sharp and giving me lots of weird angles to work with.”

But there were plenty of other moments that looked like Lara could capitalize and failed to do so. Rodriguez looked out of his element, hardly being able to throw a punch, let alone land anything substantial.

Fans at the Pavilion booed the lack of action, but as always, Lara failed to up the pace.

“I was trying to bait him to come in, but it wasn’t working,” Lara said. “So I had to get aggressive in there.”

There were moments that Lara pressed the action, particularly in the first round, but it never varied from his normal rhythm. However, it was more than enough as he won every second of every round.

“It’s never a comfortable feeling leaving it up to judges,” Lara, who has dealt with disputed decisions against Paul Williams and Saul Alvarez, said. “I’d like to win every round and get the knockout if possible, but at least I got the win tonight.”

It’s the same mentality that Lara’s always had. 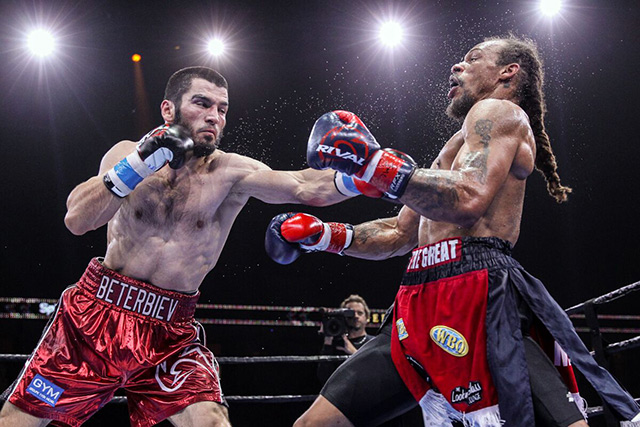 Artur Beterbiev treaded in new territory, having never been past Round 4, but looked just as strong as ever.

In Round 7, a crushing right hand connected to Johnson’s temple and referee Mark Nelson immediately stepped in as Johnson fell to the campus for the second time in the round.

The win was Beterbiev’s longest fight of his career, who said it took him time to adjust to Johnson being a southpaw. Johnson replaced light heavyweight DouDou Ngumbu with nine days notice.

“I was kind of confused after eight weeks of preparation [for an orthodox fighter],” Beterbiev said. “I couldn’t show myself 100 percent in this fight. But there’s always a good sign that I passed my four rounds. I know what it feels like.”

It was the second fight of Beterbiev’s career against a southpaw, dispatching veteran Gabriel Campillo in his last fight in four rounds. Still, there was an adjustment period for Beterbiev against Johnson. The 26-year-old took a methodical approach, stalking Johnson around the ring before connecting occasionally with the right hand.

Beterbiev found his rhythm in round four, starting to land thudding combinations against the ropes. The following round, Beterbiev scored the first two knockdowns of the first ÔÇö once with a stiff jab and then shortly after with Nelson issuing a knockdown since the ropes kept Johnson up.

But in Round 6, Johnson ended up pressing the pace. After a strong round, Beterbiev looked content to take the round off and it was mildly surprising to see him be backed up.

“I just took a break to relax and have more strength in the next round. It was my tactic. Don’t tell anybody,” Beterbiev said, laughing.

In attendance watching was Andrzej Fonfara, who is coming off the biggest win of his career over Julio Cesar Chavez Jr. and is Chicago’s top fighter.

“He’s strong, very strong. But he’s open a little bit,” Fonfara said. “He’s a future fighter. If he gets more fights like that, he’s now in at the top. Maybe in the future, we can fight one day.”

But Beterbiev’s main goal is to fight for a world title in his next fight. He reiterated that Friday.

“Whoever it is, I’m ready for the belt,” Beterbiev said.

Polish heavyweight and Chicago crowd favorite Artur Szplika made his return to the ring with a fourth round stoppage as Manuel Quezada failed to come out between rounds. With the win, Szpilka improved to 19-1 with 14 knockouts. It was his first fight with trainer Ronnie Shields.

With a large section of the crowd there to support him local lightweight Josh Hernandez (1-0, one KO) earned his first victory with a first-round stoppage at the end of the round over Joe Estrada (0-4). The official stoppage was at 2:58.

In a battle of lightweights, Jose F. Queszada earned unanimous decision over Jeffery Ramos (4-4, two KOs). Queszada knocked down Ramos in the third round, but then later in round lost a point for hitting behind the back, making it a rare 9-8 round. The official judges had the fight 59-53 twice and 59-54..

Detroit’s Dominique Dolton (16-0, eight KOs) continued his unbeaten career as Victor Foneseca (9-5-1, seven knockouts) declined to come out for the sixth round.

Local welterweight prospect Eddie Ramirez (9-0, seven KOs) notched his ninth professional victory with a third-round stoppage against Geraldo Cuevas. Cuevas hit the canvas and the referee waived it off at 2:36.

On the 26th anniversary of his father’s disputed rematch draw with Sugar Ray Leonard, Ronald Hearns (28-5, 22 KOs) picked up a win of his own with a fifth-round knockout over David Thomas (10-5-2, eight KOs). The 36-year-old Hearns connected with a thunderous right hand to end the fight at 51 seconds of Round 5. The win was Hearns’ second in a row since a four-fight losing streak that dated back to 2011.

In the first fight of the evening, welterweight Ramiro Carrillo earned a third-round knockout over Derrick Bell (12-24-1, seven KOs). Camrillo (9-0, five KOs) sent Bell down in the second with a left hook and finished the job at 1:26 in the third.