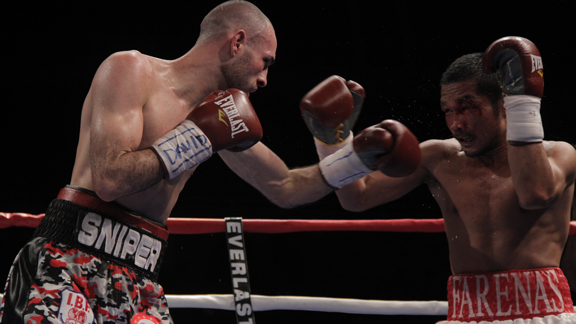 Pedraza (19-0, 12 knockouts) has been preparing for his title shot ever since he beat Michael Farenas in an eliminator last November.

“We opened the training camp in Las Vegas in December,” Pedraza told RingTV.com in late May from his training base in Cidra, Puerto Rico. “It has been a long and hard training camp – intensive. This camp has been special because it is for the world championship title.”

The 26 year old switch-hitter is confident of victory and joining the pantheon of top Puerto Rican fighters as world champion.

One of his promoters, Gary Shaw, is pleased with his development and sees star potential: “I believe Pedraza is a complete package and I see improvement in him in every fight. He has an award-winning smile, fan-friendly style and is just a gentleman outside the ring. What else could a promoter ask for?

Also scheduled for the Lou DiBella-promoted card at Bartow Arena in Birmingham, Ala. is an intriguing looking lightweight bout between Dejan Zlaticanin and Ivan Redkach. Up-and-coming 154-pounder Julian Williams stays busy with a 10-round contest against Arman Ovsepyan.

Anson Wainwright – What are your thoughts on your fight against Andrey Klimov?

Jose Pedraza – Andrey Klimov is a strong boxer, always going forward. The jab and straight right are his best shots.

AW – When you assess Klimov’s strengths, what do you see as well as areas you can exploit?

JP – The only thing I see is he is strong and has good fitness. But I will be working in side steps and with speed.

AW – Klimov has lost once against Terence Crawford up at lightweight. Have you been able to take anything from that fight?

JP – I take from that fight, Klimov has problems when he fights a left-handed boxer with good movement.

AW – Rances Barthelemy vacated the title rather than face you. Do you have any thoughts on that?

JP – Barthelemy had problems with the weight like other boxers and moved to the next division. He was a good champ.

AW – Your fight takes place as chief support to Deontay Wilder’s first defense of the WBC heavyweight title he won earlier this year. That is a pretty big stage to fight on.

JP – This is the best opportunity, to fight that night on a big show on Showtime. It has taken hard work, dedication and long gym work to obtain this big exposure on Showtime.

AW – You beat Michael Farenas last November in a title eliminator. Was that was an important fight for you?

JP – The Farenas fight was very important to me because that fight opened the door to this big fight and finally my dream of becoming world champion is close to arriving.

AW – You’ve been a professional boxer just over four years. How would you assess your development?

JP – My career been slow but [has moved forward] surely.

AW – Prior to turning pro, you were a highly-acclaimed amateur. Your crowning moment came in 2009 at the World Championships, where you won silver. Tell us about your amateur career.

JP – My amateur career was a great. I went around the world. In Italy, I won the most important medal, second in the World Championships but [my most cherished] medal was in the Central-American Games in Puerto Rico.

AW – Tell us about your life away from boxing, hobbies, interests, family, etc.

JP – I love family time. I am a home person. I do not like street life. I like going out with my family. I have two kids, one boy – five years old – and a girl, three years old. We like the beach, movies and the mall.

AW – In closing, do you have a message for Klimov?

JP – I hope that he comes well-prepared for me. We can give the fans our best to give a good show. Thanks to my Lord all the time; He is the best to me. See you on the big night.