No longer broken-down, Marvin Sonsona is on the road again 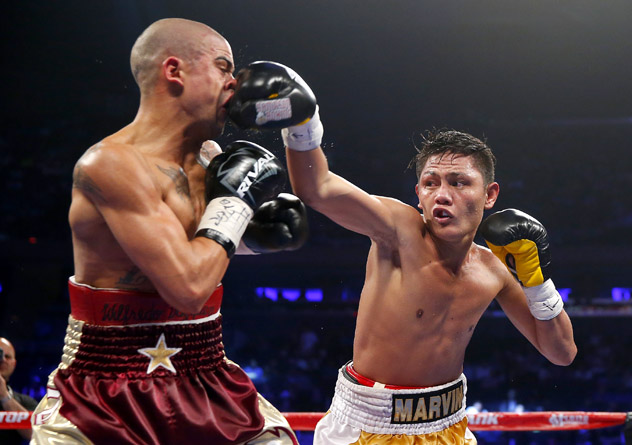 MANILA, Philippines – For the longest time, a broken-down 2009 KIA Regal sat immobile in front of Marvin Sonsona’s General Santos City home. It symbolized his career in many ways, which was as much on cinderblocks as the automobile.

His adviser, Sampson Lewkowicz had promised Sonsona one of his Mercedes if he defeated Wilfredo Vazquez Jr. in 2010, an incentive to return to world championship form after losing the WBO junior bantamweight title on the scales the year before.

Instead he lost by fourth round knockout and, with his purse money, bought the KIA. Sonsona disappeared from the world stage for years, fighting just once a year from 2011-13. During that time he ballooned in weight and seemed disinterested with the sport that served as his ticket out of poverty.

“There’s many people that he called friends that destroyed his career,” Lewkowicz tells RingTV. “Not only for Marvin Sonsona; many fighters around the world, they lose their opportunity because of friends and advisers that are all losers.”

If not for a fire that ripped through his home just before Christmas of 2013, the fire that initially made Sonsona the most highly regarded young fighter in the Philippines may never have been rekindled.

For three weeks he was homeless, forced out of the home he shared with nine others, and living in a gym. Sonsona knew he could still make some money with his fists. He accepted a fight in Feb. 2014 in Macau, China against former WBA junior featherweight titleholder Akifumi Shimoda.

After just a month of training, Sonsona showed that years of drinking and idling had not eroded the punching power that always kept him one split second from redeeming a career squandered by misadventures. That moment came in the third round, when one turn of a shoulder sent a left uppercut to Shimoda’s chin and Shimoda’s senseless body to the floor.

Then on June 7 of 2014, Sonsona got his return fight with Vazquez, whose career too had gone off the rails at that point. Sonsona dropped Vazquez in round one and fought him to a split-decision win.

Lewkowicz didn’t give him the Mercedes he had initially offered him. Instead he gave Sonsona a 2011 BMW 328i.

That four-door Sedan is now a symbol of where the 24-year-old boxer is in his career today. Sonsona uses the car to get from the apartment he shares with former IBF junior flyweight champ Johnriel Casimero to the Roy Jones Gym in Las Vegas, where he’s been based since February.

Lewkowicz knew it was vital to get Sonsona away from his hometown distractions and into an environment that breeds success, not apathy.

“I’m super happy that he gave me a car here in the US. It really helps with our training,” Sonsona tells RingTV. “For me, it’s really great because they gave me a huge opportunity as well as the one God gave me.

“I’m very happy because they still trust me despite how stubborn I was before. They’re still nice to me.”

He’s also gotten a new deal with boxing power-broker Al Haymon and will have his first fight in a year on the undercard of the Robert Guerrero vs. Aron Martinez Premier Boxing Champions card this Saturday at the StubHub Center in Carson, Calif.

Sonsona (19-1-1, 15 knockouts) will face Jonathan Arrellano (15-5-2, 3 KOs) in a 128-pound, non-title fight. Should Sonsona get past past the durable California native, Lewkowicz says he’ll match him in another 10-rounder before looking at titlists in the featherweight division.

“First of all, we have a fight with a tough fighter on Saturday. I strongly believe it’ll be a short one, then he’ll fight in September. We want to be sure that when he goes for a title fight, he’s ready to win it,” said Lewkowicz.

Getting Sonsona back into fighting shape was no small task. Sonsona first arrived in Las Vegas in May at 168 pounds. He began to work with Angel “Memo” Heredia, the former BALCO associate-turned-conditioning coach. Sonsona slimmed down but the pair split nearly a month ago.

“Memo did a very good job with him,” said Lewkowicz, “but the language barrier makes this impossible to work.”

Lewkowicz says it benefited Sonsona to be around other successful fighters like former middleweight champion Sergio Martinez and current No. 5 RING-rated junior lightweight Javier Fortuna.

Lewkowicz credits Sonsona’s Philippine promoter Sammy Gello-ani for helping him keep the faith that Sonsona would mature some day and is just happy that day came before it was too late.

“The glory and the fame damaged his personal life, with his very bad friends surrounding him before. Now he’s changed for the sport and I believe you will see this on Saturday,” said Lewkowicz.

“Today Marvin Sonsona is a totally different man. He grew up; he knows what he wants. He wants to be a world champion and bring to the Philippines what they deserve. A champion like Manny Pacquiao.”