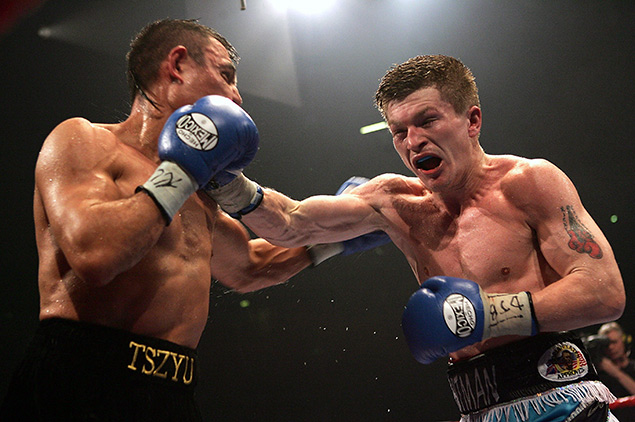 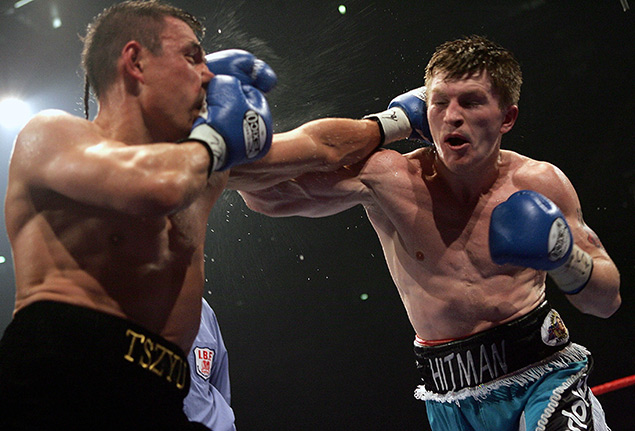 This reporter has attended some of the biggest fights, in the swankiest of venues, in the coolest of cities, but nothing comes close to June 4, 2005 at the M.E.N. Arena in Manchester, England, in terms of electricity and fan affection.

The defending IBF and RING junior welterweight champion was 35-year-old Kostya Tszyu, an Australian of Russian descent, who was already a boxing legend. This cerebral power-puncher was 14-1 (11 knockouts) in world title fights and resided near the very top of any pound-for-pound list.

Ricky Hatton was the challenger and a true hero in his home city of Manchester. “The Hitman” boasted an impressive 38-0 (30 knockouts) record but the formidable Tszyu represented a switch from swimming pool to deep blue ocean. The odds makers favored the champion but Hatton, a fearsome body puncher, was obsessed with victory and vowed to send shockwaves through the 140-pound division.

“There were other good champions at my weight like Vivian Harris and Sharmba Mitchell but I wanted Tszyu because he was the best,” said Hatton, who was 26 years old at the time. “I think Frank (Warren) tried to talk me out of it because I was number one contender for Harris, but I was adamant that I wanted this fight.

“Kostya Tszyu was someone that I looked up to because he was a class act from start to finish. He had well over 200 amateur fights (259 wins, 11 losses) and the guy was just a complete punching machine. He had flattened top opponents like Zab Judah and Sharmba Mitchell with ease, so he was the man to beat.”

Despite the fight taking place in Hatton’s home town, he first encountered Tszyu in the boxing mecca of Las Vegas, a meeting that neither man would ever forget.

Hatton reminisced, “Billy Graham (Hatton’s trainer) and I went to see the Tszyu-Judah fight at the MGM Grand. We were checking out of the hotel and I saw Kostya standing nearby so I introduced myself, congratulated him on the win, and said I’d probably be fighting him in the near future.

“He must have thought who in the hell is this Englishman, saying he wants to fight me, but when we did the press conference for our fight he remembered that discussion. He said ‘You were right about fighting me one day and fair play to you’. That was actually a really proud moment for me.”

On arrival, soccer-style chanting was already exploding from the vast majority of the 22,000 throats in attendance. Winky Wright, who had recently defeated Felix Trinidad, was introduced to a frenzied crowd. Diego Corrales, who had just performed a gladiatorial miracle in his first war with Jose Luis Castillo, upstaged him. Australian actor Russell Crowe, obviously a Tszyu fan, and not a real gladiator, was booed mercilessly.

Hatton said, “I’ve been to the M.E.N Arena countless times. I’ve watched the likes of David Haye, Carl Froch, Joe Calzaghe and Naseem Hamed box there and it’s always been a wonderful occasion. The place is always packed out and it’s a terrific place to watch a big fight.

“There was just something else in the air when I fought Kostya Tszyu. He was the undisputed champion and one of the best ever at the weight. I was the underdog, and for a local lad to fight someone of that caliber in Manchester was almost unprecedented. There was so much nervous tension because the fans knew what was at stake.”

The opening bell sounded and Hatton was 0-60mph from the get-go. Often regarded as a mere come forward slugger, “The Hitman” had underrated smarts and his foot speed and ability to close the gap gave Tszyu an absolute nightmare in the opening sessions.

“The plan was to stick to Kostya like glue, stay on his chest.” Hatton recalled. “Judah and Mitchell, in fact pretty much anyone Tszyu fought, tended to pull away from him which left them in range for that murderous right hand. Kostya would paw with his left to set you up for the long right and his leverage was at the end of that shot.

“With me moving in quickly I took that punch away from him. Even when he did land the right, I’d taken the sting out of it because he couldn’t generate the leverage he wanted. Don’t get me wrong, he stung me with a few but I knew if we could get through four or five rounds then I had a real chance.” 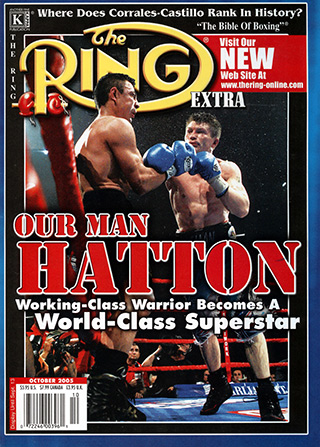 The challenger did get through the early rounds and his suffocating pressure was working wonders. Tszyu landed precision bombs at times but he was unable to control pace or dissuade the British thrashing machine from swiping at his internal organs and skull. Suddenly, the moment Hatton had been waiting for occurred – the defending champion, for just a second, wilted.

Hatton said, “I think it was round eight and it happened all of nowhere. Kostya had banked a few of the middle rounds by picking me off and he was working extremely hard. At one point I thought ‘Jesus Christ, he isn’t slowing down here’ but then I landed a body shot and I felt him sink physically.

“When that happened I knew to put the foot down. I could take chances and I could also take a punch much better at that stage of my career. With any fighter the wear and tear, over the years, takes its toll. The way I fought, and the way I lived, speeded up that process but for Tszyu I was at my very best.”

A phrase Hatton often uses is “boxing is not a tickling contest” and in Round 9 he picked an opportune moment to demonstrate this philosophy to Kostya Tszyu. A bursting left hook landed with sickening force below the belt and dropped the teak tough Tszyu to his knees. Hatton insists he had his reasons.

“Oh yeah absolutely,” laughed Hatton. “Kostya had landed three or four low blows and there had been no point deductions, so I thought if I hit him with one the referee can’t take points off me straight away. I really sunk that one in and the referee, Dave Parris, was in an awkward position because he could only warn me.

Tszyu was floundering in the championship rounds and Hatton’s continual assault was like an incurable disease. Battered and beaten, the great champion trudged back to his corner at the end of the eleventh and signaled that he’d had enough. His trainer, Johnny Lewis, threw in the towel and emotions poured out of Hatton and his home faithful.

“It was the greatest moment of my career,” Hatton said with pride. “I went on to win three more world titles in two weight divisions but I’d been dreaming of a moment like that ever since I first laced up the gloves.

“These days you can become a world champion but you don’t necessarily have to beat the best to do it. To make Kostya Tszyu quit on his stool and be involved in one of the greatest wins in British boxing history, I could never have believed that was going to happen.”

Yes, Hatton would win more world titles and claim more glory against the likes of Carlos Maussa, Luis Collazo, Jose Luis Castillo and Paulie Malignaggi but he unquestionably peaked in Manchester, England, 10 years ago. Heart breaking losses to modern legends Floyd Mayweather and Manny Pacquiao did little to tarnish his enduring legacy, and neither did an ill-advised comeback defeat to Vyacheslav Senchenko in 2012.

Tszyu, on the other hand, would never return to the ring and Hatton insists that the former champion, unlike himself, made the correct decision at the correct time.

“That was a very rough and physical fight,” said Hatton of his greatest win. “Everyone goes on about how good my performance was but I think Tszyu put on a fantastic performance himself. He’s a very mature and sensible man and, unlike a lot of fighters, he knew the perfect time to call it a day. He displayed amazing courage and went out on his shield.

“We met for the first time, since the fight, last year. He said you won with that low blow and I said ‘You lying f___er, you hit me with four of them.’ He’s a great guy, it was good humored fun, and when you win a world title from a champion of that caliber you want that type of sportsmanship at the end. It’s just a great story.” 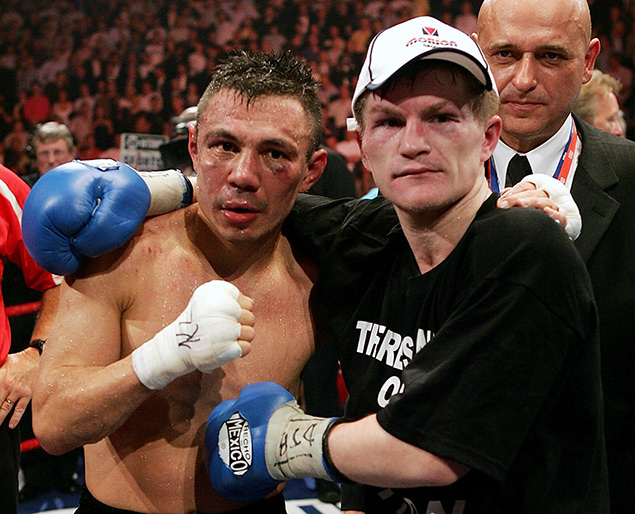 Ricky Hatton’s Vegas Tales – Me in Las Vegas, what could possibly go wrong? A new book, focusing on the former two weight world champion’s experiences in the glossy backdrop of Sin City. It is available from amazon.com and all leading book shops.