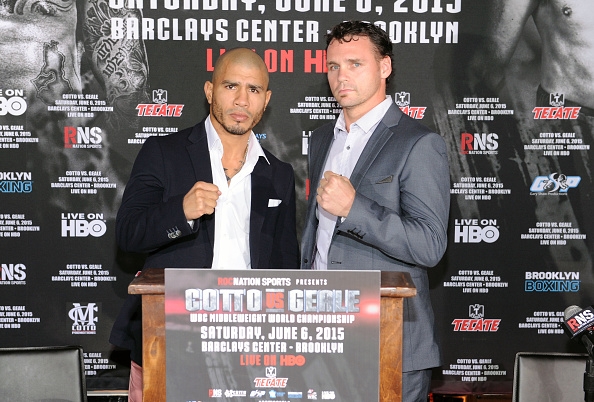 Weight, schmeight, Miguel Cotto made clear. These are the terms, they are what they are, you don’t like ’em, get over ’em.

In Manhattan on Tuesday, the 34-year-old veteran, who holds the WBC middleweight crown, was asked time and again about the catchweight clause in the contract for his Saturday night fight against Daniel Geale.

They are scrapping at 157 pounds or less at Barclays Center in Brooklyn, and Cotto made clear at BB King’s club that he’s fine with the clause and besides, where was the hubbub when Manny Pacquiao made him carve off an extra two pounds when they met in 2009?

Before the presser, put together by promoter Roc Nation, kicked off, Cotto (39-4 with 32 KOs) chatted with select media, and noted that his current trainer Freddie Roach was instrumental in having Manny get the weight edge on his side in their fight.

The weight came up, and other folks besides Geale, the Aussie with a 31-3 record were brought to his attention. If it hurt his feelings, the serene sort, didn’t show it…

What about Canelo Alvarez, the Puerto Rican icon was asked? He had his shot, against Floyd Mayweather Jr., and came up short…but we can talk about him once Geale is sorted out. And before we get to Geale, what about Gennady Golovkin? Is he in the mix for next, or soon? He can be, but let’s do the Geale thing first…and beyond that, the mega-fights will happen…but all in good time.

Yep, the message wasthis: my track record speaks for itself, and I’m no dodger…so everyone can relax, the super fights will be there soon enough.

Back to that catchweight…Geale’s promoter Gary Shaw told me that his kid is supposed to weigh 157 or less on Friday, and there is no clause in the contract which calls for a money penalty if he doesn’t make it.

But, Cotto reserves the right to exit the fight if Geale doesn’t make 157…so the Aussie will be on target, weight wise, he said. Shaw took to the mic and said he likes Cotto, very much, but disagrees with the notion of having a catchweight for a title fight. Trainer Roach responded that Shaw “knows how to read a contract and he’s had that contract for a long time now.” Cotto, after thanking his family, his kids and wife and mom, for being there,then addressed the weight issue. “I think the people is making a big issue where it does not need to be a big issue,” he stated, bringing up the catchweight for the Pacman fight. “I was a gentleman the whole way,” he said.

Cotto has been a champ in four different weight divisions, but he’s still adapting, changing. He’s been a fixture at Madison Square Garden but will be doing the Brooklyn thing Saturday. So, there are changes…but also the same old Cotto; he wasn’t flappable Tuesday, as he he took queries from the press. Of Golovkin, he said that Triple G hasn’t met the caliber of foes he has. He hasn’t met “class A opponents,” as has Miguel, so Triple G needs to wait in line, basically. Also, he reiterated that the catchweight was the sticking point when he met Pacman, and it was what it was.

All in all, Cotto acted in the manner befitting, basically, a guy with massive leverage. He has a track record, he can dictate terms, as one of the most massive economic drivers in the sport. And he came off in a manner reflecting that standing in the game. Geale, on the other hand, came off in his usual manner. Ultra low key, not lacking in confidence, assuming he can hang with the big dogs. Whatever he will be weighing on Friday. A shame that the weight issue detracts and distracts from more substantial matters. But there are the times we live in, when every bit of leverage is maximized, on Wall Street, on Fight Street.