Gennady Golovkin to be ringside for Miguel Cotto-Daniel Geale fight 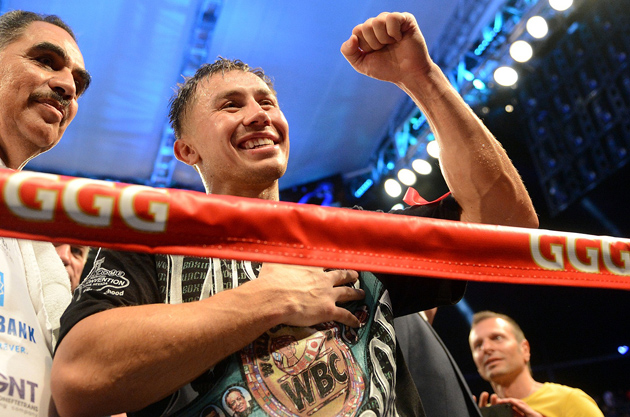 Unbeaten WBA middleweight titleholder Gennady Golovkin will be ringside for THE RING/WBC champ Miguel Cotto’s title defense against Daniel Geale on Saturday at Barclays Center in Brooklyn, New York, according to a press release from K2 Promotions, which promotes THE RING’s No. 1-rated middleweight and the WBC’s mandatory challenger

“I want to watch this fight in person and look forward to fighting the winner to show who the real WBC middleweight champion is,” Golovkin stated in the press release. “A unification fight with the winner is very important to me.”

With an extraordinary record of 33-0 with 30 knockouts, Golovkin has the highest KO% in middleweight history and has become one of the most marketable international stars in boxing.

On May 16, Golovkin filled The Forum in Inglewood, California with over 12,000 fight fans as he stopped Willie Monroe Jr. in the sixth round. In keeping with his outstanding international television ratings, the fight reached 1.5 million viewers on HBO in the United States and was shown in over 120 countries worldwide.

Golovkin, who is riding a knockout streak of 20 KOs in a row, is currently No. 4 in the Pound for Pound rankings of both ESPN.com and THE RING.

“His two most recent U.S. fights have sold over 21,000 tickets, making him the highest ticket seller in the State of California. This coupled with his continued growth in TV ratings, has made Gennady one of the sport’s most watched fighters,” said Tom Loeffler of K2 Promotions. “Three of Gennady’s most dominant KO performances have come in front of his huge fan base in New York City and he looks forward to returning this weekend. As the mandated WBC challenger to the winner of the Miguel Cotto-Daniel Geale bout, he has a very strong interest in the fight.”