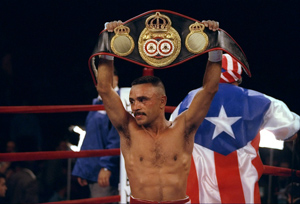 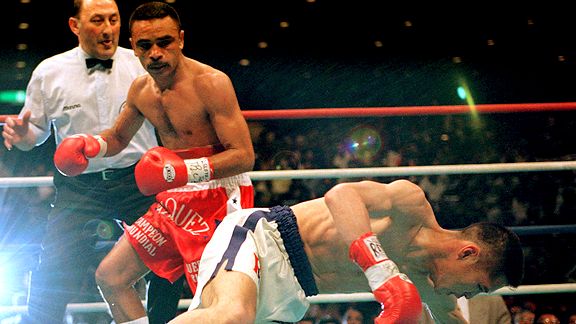 While Puerto Rican stars such as Wilfred Benitez, Wilfredo Gomez, Hector Camacho Sr., Felix Trinidad and currently Miguel Cotto are more celebrated and have gotten most of the attention, Wilfredo Vazquez Sr. quietly went about his business building a very respectable career of his own.

It didn’t look that way at first; Vazquez lost his debut back in Jan. 1981. He didn’t lose again for five years when he challenged Miguel “Happy” Lora for the WBC bantamweight title, losing a spirited unanimous decision, despite dropping the Colombian in the fourth frame.

In fall of 1987, the proud Puerto Rican went to South Korea where he met Chan-Young Park for the WBA 118-pound crown. This time, he wasn’t to be denied, stopping the Korean in the 10th round.

His bantamweight title reign was rather unspectacular; Vazquez drew against former champion Takuya Muguruma, who was bidding to win back the title he had lost to Park the previous year. One fight later, Vazquez would lose the strap to Khaokor Galaxy on a split decision in Thailand just seven months after winning it.

Vazquez lost his comeback fight when future two-division world champion Raul Perez outboxed him in Los Angeles and, three fights later, he lost again against future two-time bantamweight beltholder Israel Contreras, who stunningly stopped him in the opening round.

At this point, it seemed Vazquez’s best days were likely behind him. However, he stepped up to junior featherweight and, after a couple of rehabilitation fights, he was matched with old adversary Perez for the WBA 122-pound strap. This time he didn’t let the Mexican get into his stride, dropping him in the second and again in the third before the fight was waved off.

The globetrotting continued and the wins mounted up. Over the next three years, Vazquez further established his credentials with nine successful defenses against the likes of Thierry Jacob (TKO 8 and KO 10), Luis Mendoza (UD 12) and Orlando Canizales (SD 12).

Ironically, Vazquez, who ultimately took part in 21 world title fights, went 16-4-1 with nine stoppages with all but one coming at home. The only time he fought in Puerto Rico was when he was dethroned of his WBA 122-pound title by Antonio Cermeno. In his 68-fight career, Vazquez fought on the Island just 19 times.

Again he stepped up in weight, this time, at featherweight, after three comeback wins, “El Orgullo de Puerto Rico” (the Pride of Puerto Rico) took on WBA and lineal champion Eloy Rojas on the undercard of Felix Trinidad-Freddie Pendleton at The Mirage Hotel and Casino in Las Vegas,Nev. Although he was trailing badly on the cards, Vazquez rallied, dropping the Venezuelan twice before the latter was rescued midway through the penultimate round in what earned the “Knockout of the Year” award by THE RING magazine in 1996.

It’s also the fight that Vazquez believes was the best win of his career: “When I beat Eloy Rojas and made history by becoming the first fighter to win titles in three different divisions but the same organization [the WBA].”

Following four successful defenses, he was offered the opportunity to fight WBO titlist Naseem Hamed for a reported career-high payday thought to be in the region of $600,000. When he wasn’t allowed to defend his championship, he vacated the belt. Though he put up an honest effort, he was picked off by Hamed, who dropped Vazquez four times before the action was called off in the seventh round.

After a near- two-year absence, Vazquez returned, beating a couple of journeymen to set up a fight with Juan Lazcano, who beat him in nine rounds. Four more fights followed at a lower level before he decided to hang the gloves up in 2002 with a record of 56-9-2 with 41 KOs.

When looking back on his carer, Vazquez said he wished he had been able to win a fourth world title and says he’d have liked to have fought Manny Pacquiao: “I wanted to fight the best.”

Since retiring, he has guided his son and namesake, Wilfredo Jr., to the WBO junior featherweight title and also trains his younger son, Israel.

The now 54-year-old isn’t in the International Boxing Hall of Fame but is on the ballot for consideration.

RingTV.com spoke with Vazquez Sr. through Felix “Tuto” Zabala about the best he faced in 10 key categories. 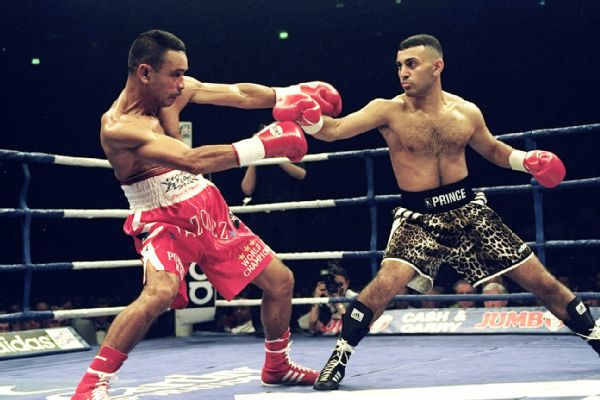 Naseem Hamed: Eloy Rojas and Raul “Jibaro” Perez but Hamed was very difficult in every aspect. Rojas had a great jab, was big and tall. Also Jibaro was very big.

Eloy Rojas :Rojas was a good boxer, tall and a long stiff jab.

Orlando Canizales: My most difficult win. He was coming up from bantamweight with 16 title defences.

Takuya Muguruma: He took everything I hit him with.

Hamed: Overall the best, Hamed could punch but was also too quick to see the punches coming.

Hamed: He was just a very quick fighter.

Hamed: He could move in the ring like nobody else. He got in different angles.

Hamed: He had the whole package, smart, quick, defense and was a good puncher.