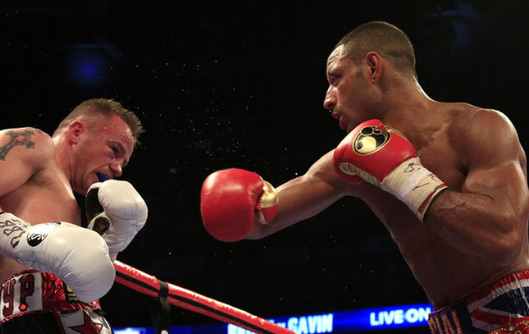 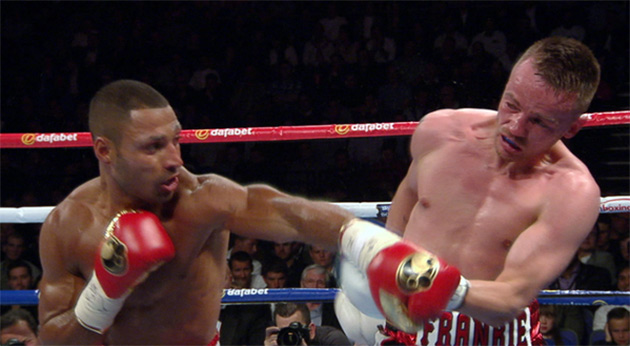 In a fight for the connoisseurs rather than the casuals, Sheffield’s IBF world welterweight champion took his time and patiently dissected the challenge of fellow Briton Frankie Gavin this evening at London’s O2 Arena, before suddenly trading subtlety for savagery in round six and stopping the southpaw against the ropes. In doing so, he retained his belt, extended his unbeaten run to 35 fights and again found himself linked to a potential blockbuster with Amir Khan.

That, unlike tonight’s affair with Gavin, is an all-British world title fight worthy of all the talk and hype. It’s a fight that would define both men. One that would settle a long-running feud. One that carries meaning.

Brook’s beating of Gavin, however, was to be expected. It seemed a lopsided contest on paper and, though Gavin’s technique and awkward southpaw style slowed the action and occasionally made Brook hesitant, he didn’t possess nearly enough firepower or gears to disrupt or change the momentum of the contest.

Instead, Brook, 35-0 (24 KOs), seemed totally in control at all times. His speed and explosiveness caused Gavin issues – problems he was unable to overcome – and his uncanny ability to jump in with shots took the challenger by surprise and counteracted his usually superb timing.

The finish, which arrived in the sixth round, was kickstarted by a beautifully-picked Brook right uppercut followed by a straight right hand. These two shots, combined, appeared to scramble Gavin’s senses and force him back to the ropes, from where Brook completed the job with a fusillade of stiff and hurtful-looking hooks and uppercuts. Gavin, the British and Commonwealth welterweight champion, simply had no escape. He was stuck. He’d run out of ideas. Outclassed. Stopped.

One hopes the disparity in size, not to mention class, will persuade Gavin, 22-2 (13 KOs), to shed seven pounds and campaign at light-welterweight from now on. He has the tools and the talent to be a success at that weight. He owes it to himself to at least try.

Twenty-nine-year-old Brook, meanwhile, continues to be inextricably linked to Khan, his key to a mainstream breakthrough in the UK, but will likely fight someone else later this year. Keith Thurman is perhaps a risk too great, but the likes of Brandon Rios and Juan Manuel Marquez may fit the bill. Whether Khan or someone else entirely, it needs to be big.