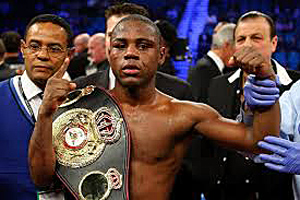 Javier Fortuna isn’t the most polished fighter among junior lightweight contenders. The 25-year-old southpaw keeps his hands down around his waist, he throws wide looping punches, and he seldom moves his head or upper-body when on the attack. However, the native of the Dominican Republic is fast and athletic with good power, oh, and he’s got a ton of fighting heart.

Fortuna (28-0-1, 20 knockouts) called on his fighting spirit to outwork Bryan Vasquez over 12 spirited (though sometimes awkward and sloppy) rounds on his way to a unanimous decision on Friday at Barclays Center in Brooklyn. Fortuna, who was able to keep Vasquez (34-2, 18 KOs) off balance and often on the ropes with his sporadically aggressive switch-hitting style, won by scores of 116-112, 117-111, 117-111.

Fortuna won the WBA’s vacant “regular” 130-pound title with the SpikeTV-televised victory. THE RING only recognizes Takashi Uchiyama as the WBA titleholder at junior lightweight.

Vasquez, a 27-year-old former title challenger from Costa Rica, simply wasn’t able to mount any sort of sustained offense against Fortuna, who let his hands go more but also used the ring to outmaneuver the game veteran in spots.