Antonio Tarver hangs on to youth – and a heavyweight dream 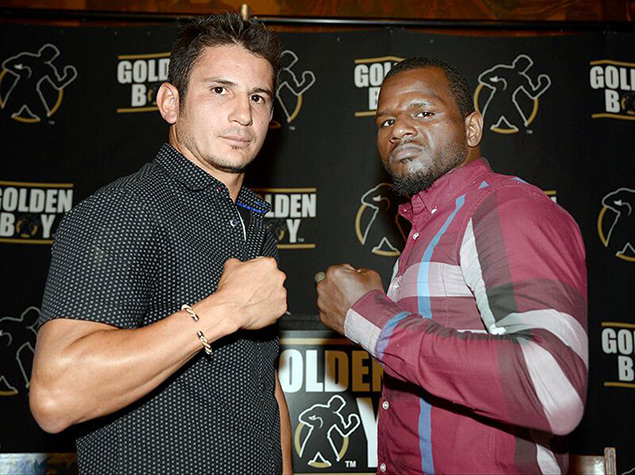 29
May
by Coyote Duran
Yep, he was over it. Retired. Done. Hung up the gloves, ready to transition to Plan B, vocationally.
But that boxing, it gets in your blood. It’s an infection, a reason for being that has to be exorcised as much as anything else.

Thus, we have not seen the last of Antonio Tarver, the former light heavyweight champion who, at 46, is campaigning as a heavyweight.

I chatted with Tarver, who’ll work color for Spike TV tonight, on a “Premier Boxing Champions” show topped by an Amir Khan-Chris Algieri scrap, and he told me about his in-ring plans for the near future.

“It was a quick retirement,” he said, with a cheerful cackle, as he showed off the personality which makes him a fan fave as an analyst. “Sometimes you get to that point, the timeÔÇªat 46, you don’t have time.”

He turns, for the record, 47 in November.

Tarver (31-6 with 22 KOs) looks much younger than his years, and he joked that he’s almost ready to release his Fountain of Youth plan, which will help consumers look as youthful as he. But kidding aside, he knows his window is damn near shut, that he needs to book some fights right quick, if he’s to snag a heavyweight title, which he dearly craves.

So, who is he targeting, anyway? “I can’t get to the heavyweight title without fighting top-notch contenders, so it’ll be a top-notch contender. I’m trying to get to the champ, man. I’m 46; I already did it all. They know when I show up, it’ll be a helluva fight. Somebody is going to have to knock me out or I’m gonna knock they ass out. One or the otherÔÇªThe perfect guy, a go-through guy, would be someone who just fought in an eliminator, didn’t win, been around a minute. I’m thinking a guy like Steve Cunningham will give me the type of challenge I want.”

Tarver beat Johnathan Banks in December, via stoppage in seven rounds, and wishes he’d booked a fight or two since. The lack of gigs is what irks himÔÇª”When I’m shelved this long, it frustrates me because I could be out there performing. I could be out there making noise!”

He said that money doesn’t rule him, that he doesn’t price himself out of matches. “It’s about destiny, about my name, about where I belong amongst the greats.”

My take: I don’t rule out a Tarver getting a crack at WBC titlist Deontay Wilder. Nor, frankly, would he acquit himself any worse than some of the guys who’ve fought RING champion Wladimir Klitschko in recent years…so who am I to opine that he should hang up the gloves? Hell no. Forty-six is the new 36. Heck, if you have a secret (legal) Fountain of Youth plan, maybe the new 32…I say, go get ’em, Tarver.