John David Jackson: Chris Algieri can fight and he can beat Amir Khan 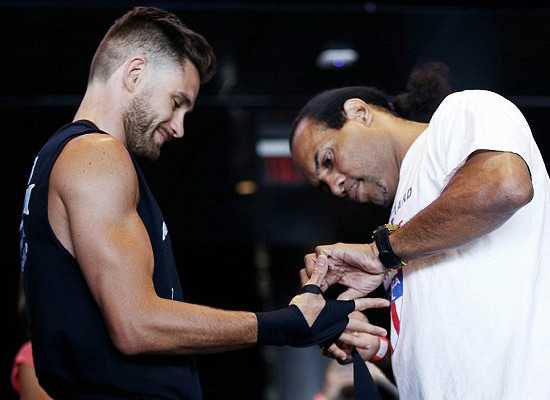 28
May
by Doug Fischer 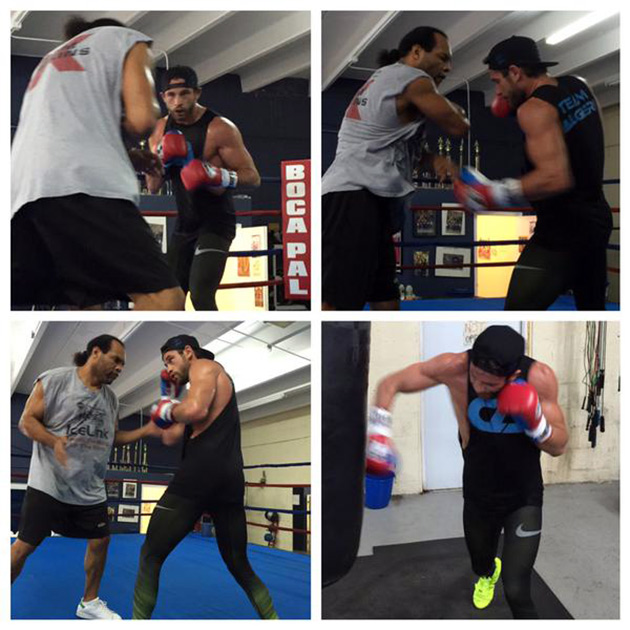 Chris Algieri wasn’t just dropped six times by Manny Pacquiao en route to a grossly lopsided decision loss in front of a worldwide audience back in November. The college grad from Huntington, New York saw his world tumble, his psyche jolted and his confidence shattered.

First, he had to reassure himself that he was still a viable welterweight contender. Then, he had to sway respected trainer John David Jackson that he could still fight.

It didn’t take Jackson long to be convinced.

“Chris came down to Florida, sought me out and told me that he needed help,” said Jackson, who works with light heavyweight champion Sergey Kovalev, among others. “Chris kept trying to win, even after he got knocked down six times by Pacquiao. That told me everything about Chris as a person and as a fighter.

He came to me and said he needed help. He needed to get past where he was. It’s why I think Chris can win.”

Not many others believe the light-fisted Algieri (20-1, 8 knockouts) is capable of beating Amir Khan (30-3, 19 KOs) on Friday in their welterweight main event at Barclays Center in Brooklyn (9:00 p.m. ET on Spike TV).

Doubters have voiced a familiar refrain throughout Algieri’s career. He was supposed to be fodder for Ruslan Provodnikov last June, and in the opening minutes, he looked it, getting knocked down twice in the first round.

Still, Algieri found himself, righted what was wrong and won. Against Pacquiao, he didn’t. He was knocked down once in the second, twice in the sixth and ninth rounds, and once in the 10th.

How does a fighter recover from a devastating beating like the one Pacquiao administered to Algieri and come back against a dangerous opponent like Khan six months later?

Jackson had some reconstructing to do. Algieri admitted his Pacquiao camp was bad, his trainer, Tim Lane, was terribly overmatched and Algieri simply lost faith in himself. Algieri’s quest for an experienced cornerman led him to Jackson.

But you just don’t show up on the doorstep of one the top trainers in the world and easily persuade them to train you. Algieri had to sell Jackson on Chris Algieri.

“He needed a seasoned pro to train him and bring different areas of his game out. One is his punch. Chris can hit. It’s not devastating one-punch knockout power, but he can punch. He needs to sit down on his shots. He never sat down on his shots before. I thought I could do something with him. It was a matter of how much Chris was able to absorb – and he absorbed it well.”

So well that Jackson truly believes his fighter has a chance to topple Khan’s grand plans of a possible September date with Floyd Mayweather Jr.

Jackson is quick to remind anyone that Khan has a suspect chin (see Danny Garcia and Breidis Prescott fights). And many, if not all, are underestimating his guy Algieri.

“We know Khan’s chin is out there, and Amir is the smaller man,” Jackson said. “Chris will come in at 147, but the next day, he’ll get up to 157, 160 pounds. He’ll be a middleweight. He will be the bigger fighter. Khan may be a hair-bit quicker, but not by much. It’s not in Khan’s arsenal to be a physical fighter.

“Khan can’t fight on the inside. He’ll grab and hold. A lot of times for fights like this, I watch the trainer. I see the way (Khan’s trainer) Virgil (Hunter) trains. I have seen Virgil make a lot of mistakes as a trainer, the way he’s standing, the way he was punching. If that’s the way he’s going to make his fighter a better fighter, then they’ve both lost. Chris is going to shock so many people for this fight.”

Joseph Santoliquito is the BWAA president and can be followed on twitter @JSantoliquito.