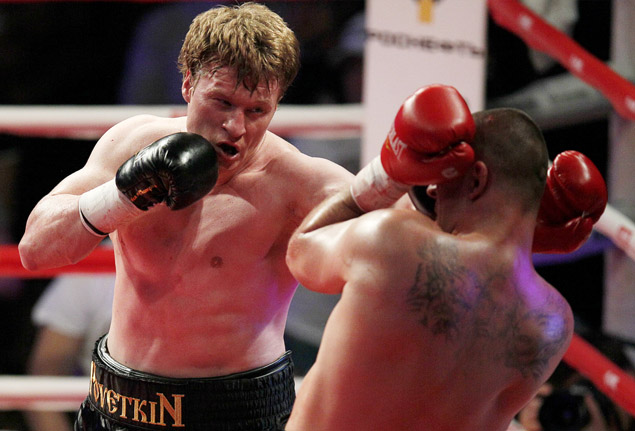 21
May
by Coyote Duran

Alexander Povetkin and Mike Perez may each have one loss on their records but they are also one win away from an opportunity to fight for a major title belt.

Povetkin and Perez will square off on Friday night for that opportunity at the Luzhniki in Moscow, Russia. At stake is a title shot at WBC heavyweight titleholder Deontay Wilder.

Povetkin (28-1, 20 knockouts) has won his last two bouts since losing a one-sided, unanimous decision to RING champion Wladimir Klitschko in Oct. of 2013. Klitschko dropped Povetkin four times during the bout.

In his last bout on Oct. 24, Povetkin, Chekhov, Russia, knocked out Carlos Takam in the 10th round in Moscow.

In his last bout on Feb. 5, Perez stopped Darnell Wilson in the second round.

Perez had famed trainer Robert Garcia in his corner for that fight and was training in Oxnard, Calif. for a few months. For the Povetkin fight, the Cuban-born Perez trained near his hometown of Cork, Ireland with American trainer Colin Morgan.

Scheduled to open the WatchESPN/ ESPN3 telecast will be a 12-round bout between Grigory Drozd and Lukasz Janik. Drozd will be defending his WBC cruiserweight title.

Also on the card, cruiserweights Rakhim Chakhkiev and Junior Anthony Wright will square off in a 10-round bout and heavyweights Manuel Charr and Alex Leapai battle over 10 rounds.

Francisco A. Salazar has written for RingTV.com since Sept. of 2012 and has covered boxing in Southern California and abroad since 2000. Francisco also covers boxing for the Ventura County (CA) Star newspaper, Boxingscene.com, and Knockout Nation. He can be reached by email at [email protected] or on Twitter at FSalazarBoxing