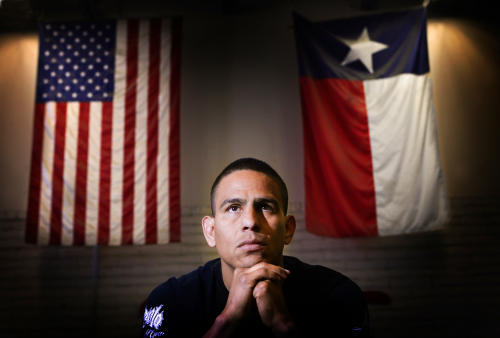 MANILA, Philippines – There is danger between the four ropes of a boxing ring. But there is also fame, money and a sense of purpose that is hard for a boxer to leave behind. Unless you’ve done roadwork in Antonio Escalante’s boots, you won’t understand what keeps him coming back to the ring in search of lost glory.

Once among the hottest young prospects in the sport, Escalante has suffered six stoppage losses in seven career defeats – including three in his last four fights. However, the feeling of waking up in the morning and no longer being a professional fighter hurts more than any gloved fist.

That’s why Escalante, just two weeks shy of his 30th birthday, will look to revive his career in one night when he faces fringe featherweight contender Eric Hunter this Friday on a “Golden Boy Live!” card at the Fantasy Springs Casino in Indio, Calif.

The card will be televised on FOX Sports 1 and FOX Deportes. In front of a national audience, Escalante seeks redemption, not only for a career gone off the rails but for a life that had spiraled out of control outside the ropes.

In 2014, Escalante was arrested on four separate occasions for driving while under the influence of alcohol. In February, he pleaded guilty to two charges and was sentenced to eight years of probation.

He has also had to enroll in the DWI Drug Court Intervention and Treatment Program, which mandates offenders to 12 months of treatment in four phases “designed with specific objectives aimed at keeping the offender drug-free and reducing recidivism,” according to the El Paso County website.

But boxing is the best treatment program for him, insists Escalante.

For the Mexican national, boxing was his route to the American dream. Born in Ciudad Juarez, Escalante came to El Paso, Texas, at age nine. He found boxing at age 15 and compiled a reported record of 40-3 before turning professional in 2003.

Possessing a menacing look ala Fernando Vargas and a brawling style that made him a crowd favorite everywhere he fought, Escalante was signed to Golden Boy Promotions and became a regular on “Solo Boxeo” cards televised on Spanish language channel Telefutura.

After an upset knockout loss to Mauricio Pastrana, Escalante returned to his winning ways, winning 10 straight and earning a No. 1 ranking with the WBA at 126 pounds.

Around this time, Escalante’s former manager, Louis Aguilar says that he noticed a change in the humble Escalante.

“[Golden Boy] was trying to get his name out there and it was working until, I think, Escalante jumped the gun and he wanted to be a superstar faster than just letting the processes go,” said Aguilar, who managed and trained Escalante from the tail-end of his amateur career until 2009.

“I think he was overconfident for sure. Too many people getting in his ear instead of staying focused. Especially locally, he got a lot of attention locally. When that happens, I think you forget what got you there. That hard training, the dedication, the focus. You start to let go of that and start to buy into being a superstar before you’re really a superstar.”

Escalante got a spot on the televised portion of the Shane Mosley vs. Sergio Mora pay-per-view in Sept. 2010 but was knocked out in three by Daniel Ponce De Leon and suffered a first round knockout against Alejandro Perez six months later. He switched between trainers Louie Burke and Ronnie Shields.

After four straight wins, Escalante was stopped again in back-to-back fights by Rocky Juarez and Roberto Marroquin. He decided to retire in 2013 but found transitioning to a post-boxing life difficult.

“I was kinda depressed; I would cry in the mornings,” said Escalante. “I would do my routine the same and, at times, I would get mad at myself like, ‘What the hell am I doing? I already announced my retirement.'”

Escalante, who had once worked briefly at UPS, couldn’t warm up to the concept of a 9-to-5 life. When the paydays stopped, Escalante found himself unable to spend as extravagantly on his three daughters.

“It kind of hurts me to not be able to buy them things,” said Escalante. “They’re my girls and I would always buy them everything. I would see their faces and I felt bad not being able to do what I used to do.”

He returned to the ring in 2014, winning once and losing to Miguel Berchelt in his most recent bout in October, admitting he took the fight for the money.

Escalante insists he took the fight with Hunter – a 28-year-old from Philadelphia with a 20-3 (10 KOs) record – for the right reasons.

He wants to shoot for his goals before he’s 35 and punchy, as he puts it. He wants to show Golden Boy that he’s still a viable contender despite not renewing his contract.

He’s now back training with Edwin Rosario, his old co-trainer from his early days as a pro. Rosario picks Escalante up every day for training because Escalante isn’t allowed to drive anymore and takes him around the El Paso and New Mexico areas looking for sparring.

“Getting this fight, of course better things come. I really want to go in there and make a good fight and let them know that I’m serious. Because I know; I’ve seen the comments saying, ‘Tony just gave up,’ and, now that I think back, I say I did give up. I wasn’t even thinking about it and now my family is hurting from that.”

Aguilar thinks Escalante’s insistence on continuing his career is due to his trying to please hangers-on.

“If he had the right people surrounding him, they’d tell him you have to stop. He’s looked real bad; he got knocked out real bad in several fights. They say, ‘You can do it; you can do it.’

“There’s a time when you say, ‘You need to stop; you’re gonna hurt yourself.'”

Just as he hears those who derided him for retiring, Escalante most certainly hears the calls for him to leave the ring behind. But for now, he fights on, driven by the allure of the only life he finds fulfilling.

“I’m definitely gonna change these bad things that happened with me. I’m gonna turn all of that around. I want to be a great fighter like everybody else. I want to be a champion.”

Ryan Songalia is the sports editor of Rappler, a member of the Boxing Writers Association of America (BWAA) and a contributor to The Ring magazine. He can be reached at[email protected]. Follow him on Twitter @RyanSongalia.