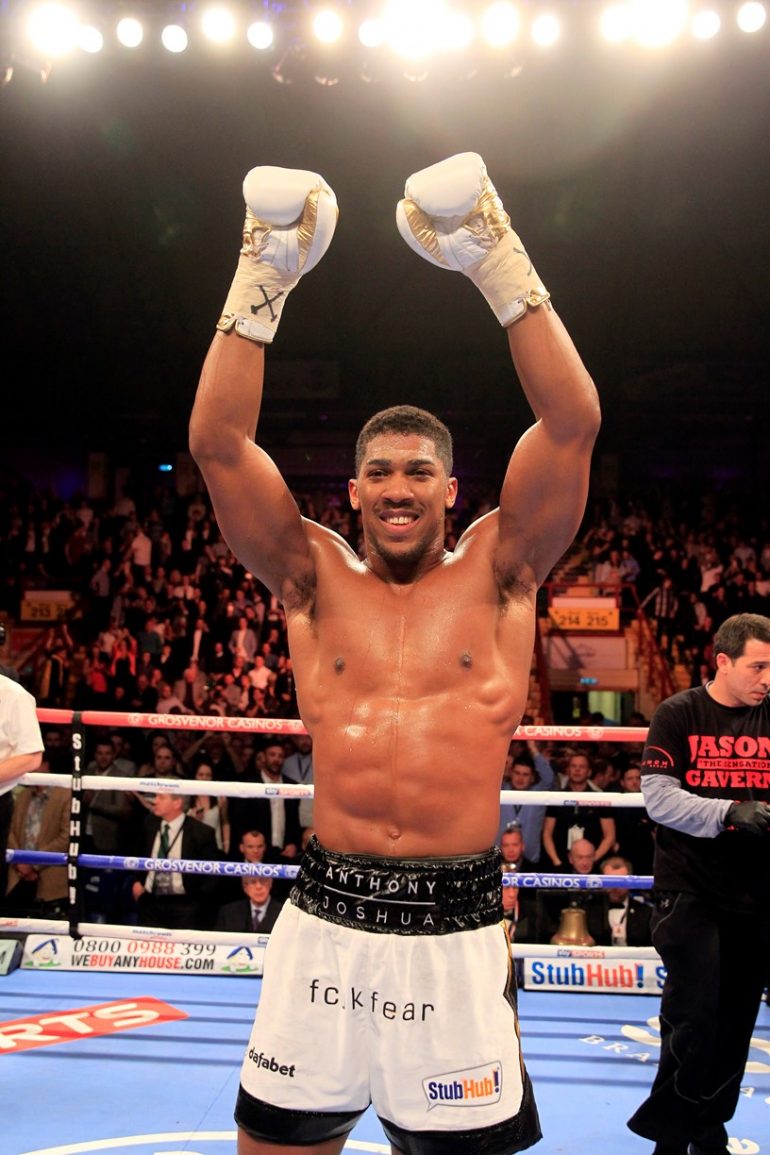 The Anthony Joshua express continued apace in Birmingham, England, on Saturday with the unbeaten heavyweight contender scoring a second-round-knockout over one Raphael Zumbano Love. The official time was 1:21.

Joshua, an Olympic gold medalist at London 2012, dominated Round 1 with a steady mix of jabs and power punching and absorbed little in return. The end came in the second when the home favorite blasted his man flush on the jaw with a crunching straight right hand and the referee was left with no choice but to call off a potential massacre.

In just three weeks’ time Joshua (12-0, 12 knockouts) will face off against his toughest test to date in the form of American veteran Kevin Johnson. The durable former world title challenger has never been stopped in a 12 year professional career, a streak many feel will end on May 30 in London.

“It’s a great fight and may the best man win,” Joshua said when confronted by Johnson during his post-fight interview with Sky Sports. “I think everyone in this arena already knows who the best man is though – this is easy work for me.”

Joshua’s Olympic team mate, and fellow gold medalist, Luke Campbell kept his own unbeaten run intact with a third-round-stoppage of Aboubeker Bechelaghem at lightweight. The official time was 1:03.

Campbell, a rapid fire southpaw, with wonderful skills, had everything his own way in the opening two sessions and boxed smartly out of the lefty stance. Bechelaghem did bring a measure of ambition to proceedings but a brisk right hook counter stunned him in the third and Campbell unloaded until the referee made a timely intervention.

Next up for Campbell (11-0, 9 knockouts) could be a big domestic showdown with friend and neighbor Tommy Coyle who, like Campbell, hails from Hull, England.

Fast rising British super middleweight Callum Smith put a hand injury behind him in a successful cameo appearance against journeyman Olegs Fedotovs. The official time was 1:36 of Round 1.

A jolting right hand in the opening minute dropped the visitor and he was never able to regain his equilibrium. Smith, who is knocking on the door of world level, was merely keeping himself sharp and picked brutal blows until the referee wisely halted the action.

Expect to see Smith (16-0, 12 knockouts) in against former European champion Christopher Rebrasse on June 26 in Liverpool, England, before he makes a move towards world honors.

Three time world title challenger Matthew Macklin got back to winning ways with a second-round-stoppage of Sandor Micsko at middleweight. The official time was 1:28.

Macklin (32-6, 21 knockouts) was aggressive from the opening bell against his southpaw opponent and landed the cleaner more effective shots. In the second several gaps began to appear in Micsko’s defense and the British veteran closed the show with two well-placed right uppercuts to the solar plexus. The visitor had no intention of beating the count.

The 32-year-old Macklin has had an outstanding career and only just fell short of winning a world title. In 2011, the Englishman dropped a controversial decision to then WBA champion Felix Sturm and was far from disgraced in a stoppage loss to Sergio Martinez the following year. The explosive Gennady Golovkin also halted him in three but a bad beating by Jorge Sebastian Heiland, last November, seemed to signal the end for Macklin.

Unbeaten junior bantamweight Kal Yafai wasted no time in dispatching Isaac Quaye at 1:22 of the very first round.

The former 2008 Olympian tested Quaye’s whiskers with a sharp left hook lead in the opening seconds and banked that glimmer of success until another opening presented itself. When it did, the follow up left hook was shorter, more accurate and carried more weight. Quaye was out before he hit the canvas.

Yafai (15-0, 10 knockouts) has already scooped a Commonwealth title at 115 pounds and is world ranked. The 25-year-old is highly touted by Matchroom Boxing.