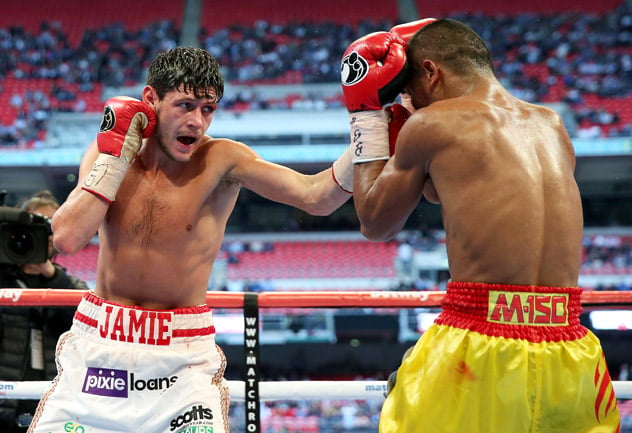 Jamie McDonnell (L) on his way to a 10th-round TKO of Tabtimdaeng Na Rachawat on May 31, 2014, in London. Photo by Scott Heavey/Getty Images.

This Saturday Britain’s Jamie McDonnell faces off against the exciting Tomoki Kameda in Texas and the 29-year-old will be hoping that the bantamweight showdown provides significantly fewer shocks than what he’s encountered during a tumultuous build-up.

McDonnell, a former IBF titleholder, now holds a regular WBA strap at 118 pounds and was looking to unify against Kameda, who holds the WBO belt. That plan was thwarted when the WBO refused to sanction the match as unification worthy because they, like THE RING, only recognize Juan Carlos Payano as WBA champion at this weight.

If that wasn’t enough McDonnell’s trainer Dave Hulley, due to a terrible fear of flying, was unable to make the trip and has been replaced by the fighter’s manager, Dave Coldwell. When everyone’s head stops spinning, it should also be noted that McDonnell is a substantial underdog to hand Kameda (31-0, 19 knockouts) his first loss.

“It’s just like when I fought Julio Ceja for the IBF title two year ago,” said an upbeat McDonnell in recollection of his previous world title triumph.

“Ceja was unbeaten with 20 knockouts in 24 wins and everyone was shitting themselves. I told them all that I wouldn’t get beat and it’s the same thing all over again with Kameda. I have never been more confident and I’m one million percent convinced that I will win this fight.”

McDonnell (25-2-1, 12 knockouts) is a superb athlete and a diligent trainer. The Doncaster, England, man has held British, Commonwealth, European and world titles and is unbeaten over the last seven years. One also sensed that the visitor is completely unfazed by both the opponent and the Texas backdrop.

“I’m not a massive boxing fan but I am good at what I do,” said McDonnell. “For me, a ring is a ring and this is just a way to earn good money for me and my family. As long as I’ve trained hard, prepared myself mentally, and avoided injuries, then I beat anyone in the bantamweight division.

“I need to turn up on the night but I genuinely believe that I’ll smash Kameda to bits.”

Despite having acknowledged that he is not a great lover of the sweet science, McDonnell did reveal that he has swatted up on this opponent and is all too aware of his strengths.

He said, “Kameda is quick and skillful, he’s got it all, but I don’t think he’s big at the weight. I’m massive for 118 pounds and if I’m at my best then I can’t see a problem. We’ve had plenty of time to come up with a good game plan and I’m ready to execute.

“I’m fit and strong and by the second half of the fight I’m sure he’ll slow down. All game plans tend to go out the window when you get punched in the face but I always feel confident that I’ll stop anyone I’m in there with. I just have a gut feeling that I’m going to be too big, too strong, and too busy.”

Despite being a decorated operator at 118 pounds, McDonnell did talk like a man who knew the stakes could scarcely be higher. Although he cannot win another world title, the fight will be televised live in the U.S. and victory over Kameda, THE RING No. 6 rated bantamweight, would send shock waves through the division.

McDonnell said, “The Ceja fight was a big step up but this is more exciting because it’s in Texas and the odds are stacked heavily against me. Kameda is an Al Haymon fighter and if I can upset the applecart over there then that’s a strong statement.

“All going well I could conceivably move up after this and there are some huge fights with the likes of Carl Frampton and Scott Quigg at 122 pounds. Huge doors open for me providing I get past Kameda and, as always, I’m ready to put it all on the line.”