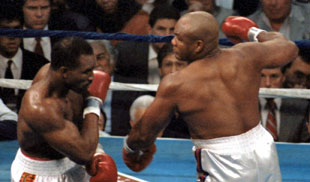 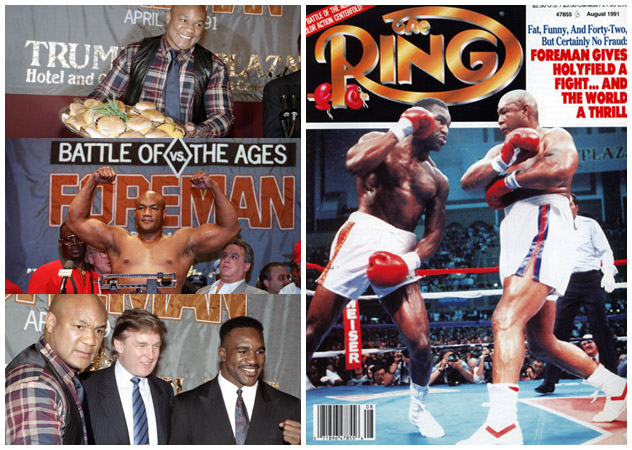 Evander Holyfield had just knocked out Buster Douglas, the conqueror of Mike Tyson, to win the undisputed world championship. George Foreman, 42, had charmed his way into the hearts of Americans with his self-deprecation and success in the ring after returning at a ripe age from a 10-year layoff.

Together they would set a pay-per-view standard that may never be approached, not even by the Floyd Mayweather Jr.-Manny Pacquiao fight on Saturday at the MGM Grand.

Holyfield and Foreman fought one another on April 19, 1991, in Atlantic City. The fight would be HBO’s first crack at pay-per-view, a relatively new medium through which the cable network required viewers to pay $35.95.

Of course, no one associated with the fight knew what to expect in terms of numbers but they discovered shortly afterward that something remarkable had happened.

“Our very first fight at HBO pay-per-view, which was then TVKO, took place on April 19, 1991, when Evander Holyfield defended the heavyweight title against George Foreman,” Taffet said. “George was the cheeseburger-eating, stand-up-for-seniors George Foreman who took the country by storm. He became everyone’s favorite. George fought 12 rounds, never sitting down between rounds, and put up a great fight against Evander but Evander won a decision. 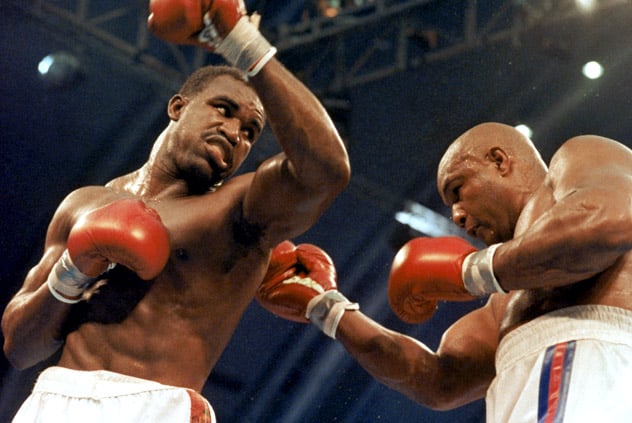 “At that time, 16 and a half million homes in America were capable of receiving pay-per-view. We did 1.4 million buys that night at $35.95. We were shocked. We never expected to do that much business. In fact, when we bought the fight from the promoters, they never expected the fight to do that much business either. We had to laugh how disappointed they were at the profits we earned. They expected us to lose money. In their minds they felt that was OK because it was our very first [pay-per-view] fight. I remember them telling us that when you launch a new company it’s OK to lose money.

“Well, we earned a profit and it’s all been history since then.”

“We did an 8-percent buy rate that night, 1.4 million buys against 16 and a half million homes. Still, today, it’s the highest buy rate of any pay-per-view megafight. I actually the other day had a moment when my mind wandered and I began to think, ‘What if we did an 8 percent buy rate with ÔÇª’ and then I stopped myself. I didn’t want to let my mind even go there because those are numbers no one can even dream of.”

“It just goes to show you how big a fight that was back then and how much it became ingrained into the psyche of America, with that type of buy rate, that type of response rate. It serves as a great lesson that sometimes you get into a situation like this and you really don’t know how high up can be. This particular fight, Mayweather and Pacquiao, is showing early trends that we haven’t seen in fights before. It remains to be seen whether those trends will continue but we’re optimistic and hopeful that we will set a pay-per-view record this weekend.”

The pay-per-view record is the 2.4 million generated by the Mayweather-Oscar De La Hoya fight in 2007. Mayweather-Pacquiao is expected to exceed 3 million, a huge number that would generate around $300 million at $89.95 (standard definition) and $99.95 (high def) in the U.S.

The universe – the number of homes with access to pay-per-view – is roughly 100 million today. Do the math on an 8-percent buy rate: That’s 8 million, a mind-boggling number that would generate close to $800 million.

“I don’t even know if I can multiply the numbers, they’re so high,” Taffet said tongue in cheek. “There are 100 million homes today capable of receiving pay-per-view. I can’t even say the number because it’s so large. I do dream about it sometimes.

“Never say never but it’s surely not something in our wildest expectations this weekend.”

Could we ever see an 8-percent buy rate in boxing again?

“Holyfield-Foreman was such a unqiue set of circumstances, the perfect storm of personality and a time in the U.S. when pay-per-view was still fairly new. I think there was a fascination with it,” Taffet said. “I think it had a lot to do with that, too, a new medium attracting a lot of people.

“Like I said, never say never, but it’s hard to imagine a fight in today’s world achieving that kind of buy rate.”