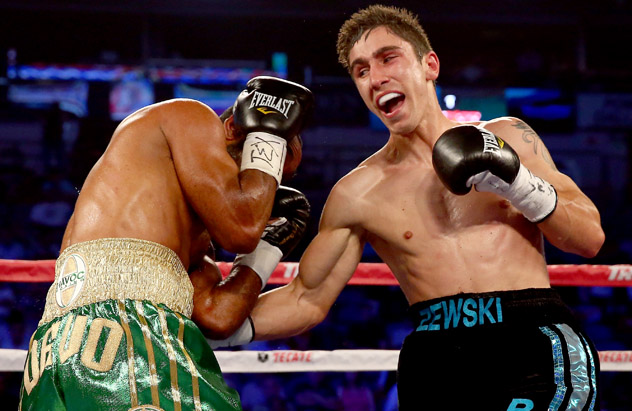 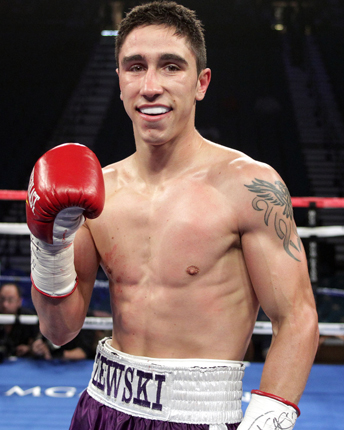 Best night of pro career: Zewski is a little further along than most other fighters who you’ll see in this feature and as such has several impressive performances to pick from.

“I think my fight when I won my belt (NABF welterweight title) against (Prince) Doku Jr. was a pretty good one in Omaha,” Zewski told RingTV.com. “I was calm and when I decided it was enough I just took him out and it went pretty smoothly.”

Worst night of pro career: For the most part Zewski has impressed. However, he feels he had an off night a couple years ago.

“My fight against Damian Frias,” he said. “He was a very tough guy and I knew it. What I did wrong was it was real easy in the first round, I sent him down in the first round and I think he had never been down before so I was a little surprised and I tried to take him out early. I hurt my hand and I gassed out. I was too inexperienced and I shouldn’t have tried to take him out that early I should have been smarter but in the end I won and I learned a lot and that’s the main thing.”

Ponomarev, 22, fights for the fifth time on American soil in what appears to be a crossroads fight for both combatants.

“I’m very excited,” admitted Zewski. “I’ve been looking for this kind of fight for a while. This fight is going to push me from prospect to contender.

“He’s a tough guy, he throws a lot of punches, he’s always in your face, trying to throw 500 punches a round. I know it’s going to be a tough night but I’m a little faster and stronger and if I’m smart and follow the game plan it should be a good night for me.”

Why he’s a prospect: During his time in the unpaid ranks Zewski won four Canadian National titles. He did well internationally, working his way up to No. 5 in the world.

Zewski’s most impressive victory as an amateur was at the 2009 World Championships when he beat Olympic silver medalist Carlos Banteaux, who had beaten him previously.

Instead of building on the win over the Cuban, he lost in the next round.

“[I] beat him and afterwards I kind of got off my game plan and I lost my next fight and turned pro right after that.”

Zewski claims he was tired of the politics often involved in amateur boxing.

“I just wanted something new. I wanted a new challenge and this is it right here. I’m waiting to get my shot to get a fight on HBO. I’m fifth in the world by WBO and [tenth by the WBC]. I think it’s coming, I’m working very hard.”

So far he’s not been in any big camps with any world champions, though has sparred with Jo Jo Dan, a notable fighter who unsuccessfully challenged Kell Brook for the IBF 147-pound title in March. He has gained experience fighting on several big bills, including Maidana-Morales, Pascal-Hopkins II and Pacquiao-Bradley I.

Since turning pro, Zewski believes he has improved immeasurably.

When asked of his strengths, he continues: “I’m humble in my talent. I’m fast, I’m strong. Knowing what my strengths and weaknesses are make me humble. I know what I can do and what I can’t do and I’m working very hard on what I cannot do to make sure I can do it better and compete at a better level.”

The likes of Lucian Bute and Jean Pascal are hugely popular in Canada. The hope is Zewski can one day add his name to that list.

“I think there’s a huge potential of boxing [in Canada],” commented Zewski. “I think I could draw big crowds but I could fight south and north of the border and I’m very happy with that.”

He lives an hour’s drive from the Bell Centre, home of Canadian boxing, something not wasted on him.

“I want to make it happen, of course, you see how the Montreal Canadians fill the Bell Centre week after week, Lucian Bute did it a few times. It’s huge, like 22,000 people, but it’s magic and hopefully one day I can get the big fights and fill the Bell Centre.”

His manager, Cameron Dunkin, sees a lot of potential for his fighter.

Why he’s a suspect: Zewski is a perfectionist and believes there is always room for improvement.

He says he’s working on being able to relax more in the ring.

“I had a tendency to gas out a little bit in the early fights of my career because I would want to knock people out and look good.”

Dunkin also sees mistakes in the past. “There were fights where he got hit too much,” his manager explained. “That’s why I sort of drew back but now he’s pointing his shoulder and he’s using different angles and I think he’s corrected a lot of things.

“He’s ready to fight. I don’t to hold him back anymore because I feel like I felt with (Kelly) Pavlik, I reached a point where I had to let him go and I think he’s at that point now. I said it with Diego Corrales and I had to wait a couple fights and he was great and he’s right at that point there.”

Zewski said his goal is to excite boxing fans: “Fans pay for tickets, you’re a show. If you’re a comedian and don’t make people laugh you’re not going to make any money. I just want to make good shows for the fans.”

“The first gym I walked in I remember going up the stairs and hearing the noise of the punches and I knew I would spend a lot of time in that gym and I did,” he said. “I was hooked right away, I really have a passion for my sport. I have fun in the ring. I have fun training.

“Some guys go into boxing because they’re from tough areas, I choose it. I played hockey, I played soccer, I choose the sport where you’re alone in there, it’s all on you. It’s one on one and I love it.”

He credits his father, Jean, for his help and mentoring through the years.

Zewski doesn’t look up to any one particular boxer. He’s a student of the game and watches old-school guys like Willie Pep, Carlos Monzon and Charley Burley.

He is married and the couple is looking forward to the birth of their first-born on May 11.

“I’ve got to get this fight done on May 1st and come home quick to make sure I don’t miss anything,” he said.

Away from boxing he likes to go fishing and watch TV.