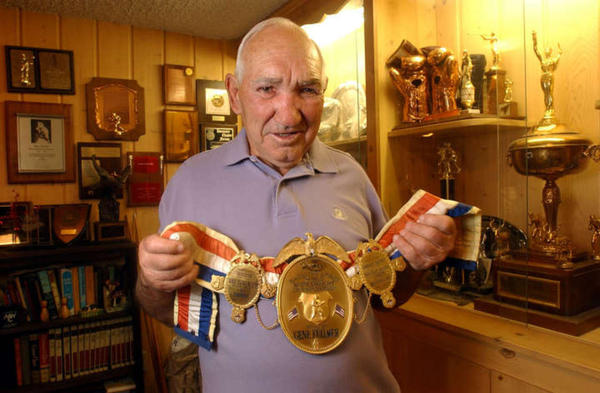 His brutally physical ring style powered Fullmer to a 55-6-3 (24) record during a 12-year-career that saw him defeat Sugar Ray Robinson (twice), Carmen Basilio (twice), Paul Pender, Gil Turner (twice), Rocky Castellani, Ralph “Tiger” Jones (twice), Charles Humez, Chico Vejar, Ellsworth “Spider” Webb (twice), Florentino Fernandez and Benny “Kid” Paret while closing out his career by going 0-2-1 against fellow Hall-of-Famer Dick Tiger. He is only one of two men ever to defeat Robinson twice in championship fights (Pender was the other) and his first fight with Basilio was named THE RING’s “Fight of the Year” in 1959.

Fullmer was born July 21, 1931 in West Jordan, Utah and began boxing after his father, Tuff, brought Gene and his younger brothers, Don and Jay, to a gym run by longtime Utah politician and boxing manager Marv Jenson. Fullmer turned pro in June 1951 with a first round knockout over Glen Peck and the man nicknamed “Cyclone” proceeded to blow through his early competition by scoring 11 straight knockouts to begin his career and 18 in his first 21 bouts, 16 in the first four rounds. But as he raised his level of opposition, Fullmer’s true strengths began to emerge – relentless pressure, vicious body punching, painfully clubbing blows over the top, a fierce competitive drive and an excellent chin. Those attributes carried him to 29 straight wins before Philadelphia’s Gil Turner outpointed Fullmer at Brooklyn’s Eastern Parkway Arena in April 1955. Fullmer went on to avenge that loss twice over by winning a unanimous decision in his very next fight, then a split nod six fights later.

Back-to-back decision defeats to Bobby Boyd and Argentine strongman Eduardo Lausse temporarily stalled Fullmer’s progress but he zoomed up the rankings by defeating Turner in their rubber match, Jones and Humez, then the number-two contender. Following a third-round KO over Moses Ward in a tune-up, Fullmer met Robinson for the middleweight title on Jan. 2, 1957 at Madison Square Garden. 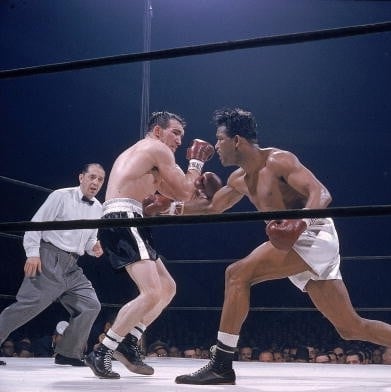 The 35-year-old Robinson was making the second defense of his third middleweight reign and despite being 10 years older he was a slim 6-to-5 favorite. But once the action began, it became clear that Fullmer’s unorthodox swarming was the antidote to Sugar Ray’s peerless technique. Fullmer built an early lead, opened a cut over Robinson’s left eye and scored a seventh-round knockdown en route to a commanding 15-round decision.

Following a pair of non-title 10-round wins over Wilf Greaves and Ernie Durando, Fullmer and Robinson met again on May 1, 1957 at Chicago Stadium. This time Fullmer was a robust 3 1/2-to-1 favorite and, through the first four rounds, he showed why as his ruggedness carried the action. But just before the midway point in round five, Robinson nailed Fullmer coming in with what is now known as “The Perfect Punch,” – a hair-trigger hook to the jaw that sent the champion stumbling backward before hitting the floor. The effects of the blow were too much for Fullmer to recover from and referee Frank Sikora counted 10 over Fullmer for what would be the only time in his career.

“That was supposedly the greatest left hook ever thrown and it happened to hit me on the chin,” Fullmer said years later on a Classic Sports Network segment. “When I came to, I was standing up and he was in the other corner jumping up and down. I asked my manager, ‘How come Robinson is doing exercises between rounds?’ and he said, ‘It’s not between rounds.’ I said, ‘What do you mean?’ and he said ‘They counted 10,’ and I said, ‘It must be on me because I never heard any of it.'”

The middleweight title eventually split and while Robinson went on to lose the lineal title to Pender, Fullmer captured the vacant NBA belt (the forerunner to today’s WBA) by stopping the iron-chinned Basilio in 14 rounds. If the stoppage itself wasn’t surprising enough – it was the first time Basilio had ever failed to go the distance in 75 fights – the manner in which Fullmer achieved it was even more shocking. The conventional wisdom going in was that Fullmer-Basilio would be a titanic clash of bulls but Fullmer surprised everyone by turning bullfighter.

“I knew how Basilio fought and I didn’t figure he could change so I never did train to be a boxer,” Fullmer told Peter Heller in the book In This Corner. “Even in training camp, I trained to slug. Word got back to him, he was all set for me this way. He come out slugging, I moved back and I had just a split-second faster timing that night than he did and I just beat him to the punch all night. And, of course, we got in and had a few exchanges which we come out about even, but when we were at a distance at all, he’d go to throw a punch and I’d just barely move out of the way and then I’d stick him and stick him and stick him. Kept sticking him and beat him pretty soundly, really, for the fight.”

A solid right hand sent Basilio staggering back and moments later, his corner, seeing their man was badly stunned, asked referee Jack Downey to stop the fight. After retaining his belt against Webb (UD 15) and future champion Joey Giardello (D 15), Fullmer stopped Basilio again, this time in 12 rounds. Because of their mutual dislike of Robinson, Fullmer and Basilio struck an understanding that turned into a longtime friendship. During one IBHOF induction weekend in the early-1990s, they engaged in a humorous sparring session. 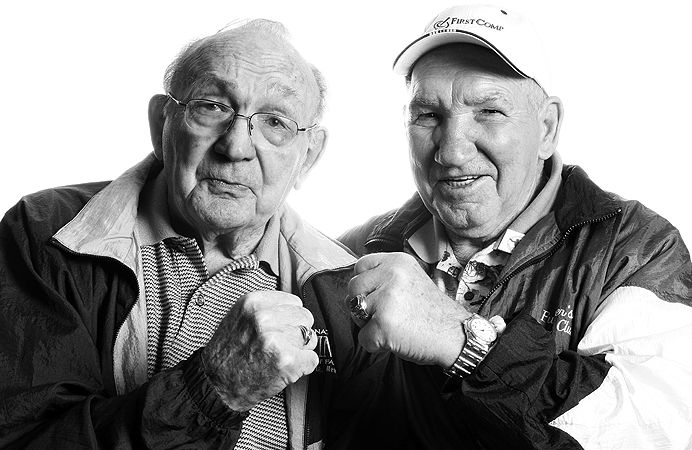 A little more than five months after the Basilio rematch, Fullmer fought Robinson to a draw that many thought Sugar Ray edged out. The controversy prompted a fourth meeting and, this time, Fullmer nearly scored a knockout in the third round before pounding out a 15-round unanimous decision.

One of Fullmer’s proudest victories came five months later when he scored a split decision over the power-punching Cuban Florentino Fernandez, for, in the late rounds, a Fernandez blow fractured a bone in Fullmer’s right elbow. Fernandez staged an inspired surge in the final rounds but Fullmer’s early lead was enough for him to retain his title.

Next up was reigning welterweight champion Benny “Kid” Paret in Dec. 1961 and, from first bell to last, the Utah native dished out a merciless pounding before ending the fight with three knockdowns in the 10th. It would prove to be the final victory of Fullmer’s career, for his final three fights came against the powerful Dick Tiger, who won the inaugural WBA middleweight championship by unanimous decision in Oct. 1962. Exactly four months later, Tiger retained the belt via a blood-soaked 15-round draw, thanks to a late rally. The closeness of the rematch led to a third fight, this time in Tiger’s native Nigeria for the WBA and now the WBC belt. The 32-year-old Fullmer was long past his best while Tiger, though nearly two years older, was still near his peak. Following the seventh round, Jenson asked for the fight to be stopped.

Fullmer remained active in retirement as he coached young fighters, refereed a handful of fights between 1967 and 1990 (most notably the Bob Foster-Al Bolden fight in Sept. 1976) and made frequent appearances at the IBHOF’s Induction Weekend. According to a story on the Deseret News website, Fullmer helped establish a Golden Gloves franchise in the Rocky Mountain region. In 1960, he received the Edward J. Neil Award for Fighter of the Year.

As vicious as he was inside the ring, he was that genial outside it and, for that, he was considered among the most popular visitors to Induction Weekend. Health issues prevented him from attending in recent years. Fullmer’s passing comes at a particularly difficult time for the family, for it happened on the same day his younger brother Jay, who died last week, was laid to rest. The other fighting brother, former middleweight title challenger Don, died in Jan. 2012.

Lee Groves is a boxing writer and historian based in Friendly, W.Va. He is a full member of the BWAA, from which he has won 13 writing awards, including 10 in the last five years and two first-place awards since 2011. He has been an elector for the International Boxing Hall of Fame since 2001 and is also a writer, researcher and punch-counter for CompuBox, Inc. He is the author of “Tales from the Vault: A Celebration of 100 Boxing Closet Classics.” To order, please visit Amazon.com or email the author at [email protected] to arrange for autographed copies.