What it’s like facing Floyd Mayweather Jr.: From THE RING Magazine 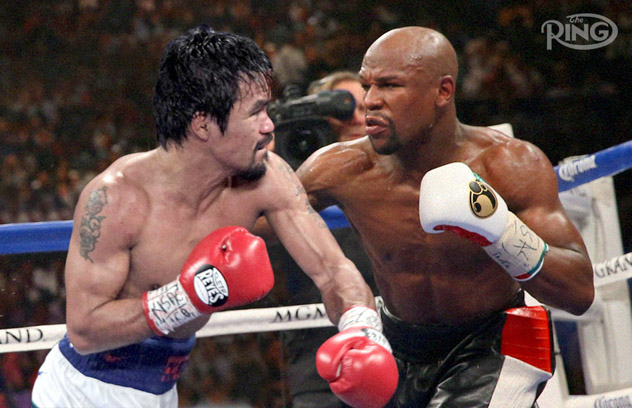 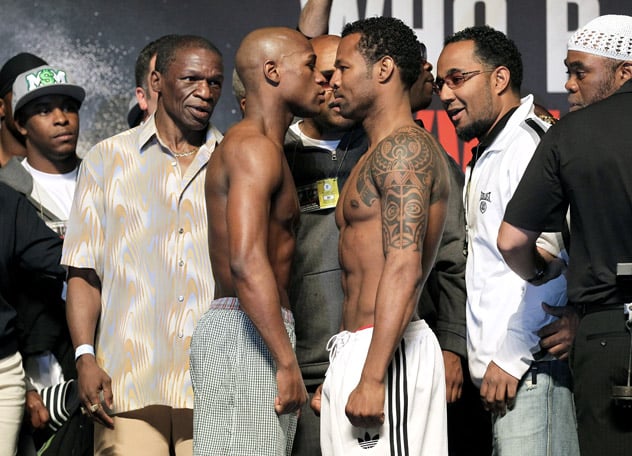 Floyd Mayweather Jr. and Shane Mosley face off before their night in the ring on May 1, 2010. Mayweather won by unanimous decision. Photo by Jed Jacobsohn/Getty Images.

This is the fifth in a series of stories on Floyd Mayweather Jr. and/or Manny Pacquiao that appeared in THE RING Magazine in recent years. This piece on Mayweather, written by Mike Coppinger, is an interesting look back at how some of Mayweather’s former opponents evaluated him when he was about to face a fighter who turned out to be easy prey – Robert Guerrero – and when a Canelo Alvarez fight was still only a possibility. It originally appeared in the June 2013 issue of the magazine. The current issue – previewing the May 2 fight – is on newsstands now. Don’t know where to find a newsstand near you that sells it? Click here. To subscribe ÔÇö both to the print and digital versions ÔÇö click here. You can also purchase the current issue on that page.

PAST OPPONENTS WEIGH IN ON WHAT MAKES ‘MONEY’ SO GOOD BEFORE THE MAY 4, 2013, MATCHUP WITH ROBERT GUERRERO

Floyd Mayweather Jr. loves to say “43 have tried and 43 have failed” (actually 42 since he fought Jose Luis Castillo twice), a constant reminder that the pound-for-pound Picasso’s record remains unblemished.

The 36-year-old welterweight is the dominant fighter of his era, possessing an amazing array of speed, skills and ring IQ. But just what makes the future Hall of Famer so good?

THE RING caught up to five of his former opponents to find out what it’s like to be face-to-face with Mayweather ahead of his fight with Robert Guerrero for the vacant RING welterweight championship on May 4 in Las Vegas. 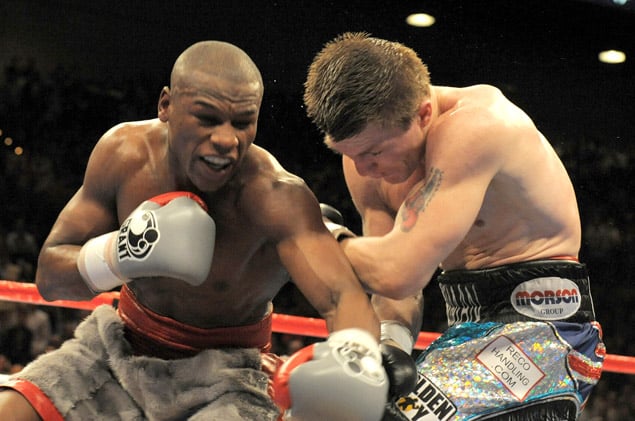 Mayweather strengths: “He didn’t compare to the other people I boxed; he’s without doubt the best I ever faced. What makes Floyd so good is his defense and his timing. I must have thrown three times more punches than Floyd but he threw the punches that counted. He didn’t waste any shots and he caught me. That’s what makes a great fighter.”

Being in the ring with Mayweather: “Needless to say it was a great honor to challenge Floyd, who was pound-for-pound the best boxer in the world, and for what he’s done since I fought him makes me feel even prouder.”

Difficult style for Mayweather: “I think somebody with a similar style to Floyd, an attacking fighter. That’s what brings out the best in Floyd, when he’s under pressure; that’s when you see the best of Floyd. 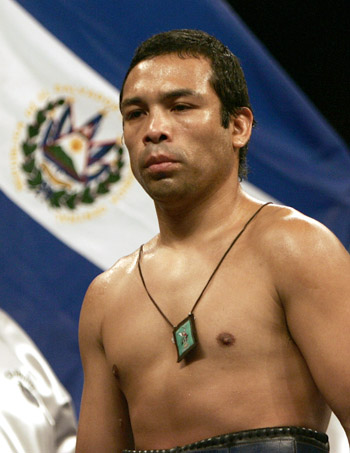 Mayweather vs. Guerrero: “[Guerrero] just seems like he has a lot of motivation riding into each fight, with his wife being sick, but he’s been able to fight through that and win big fights. Unfortunately, I don’t see him beating Floyd ‘Money’ Mayweather. It’s just hard.”

Mayweather strengths: “I used to spar with Roger Mayweather back in the ’80s, and it was a great experience for me to see him roll those shots off his shoulder and then come back with combinations or a fantastic right uppercut. [Floyd] Mayweather has that [ability], except he comes back with a beautiful straight right hand.

“You get all these Mexican fighters that go at Mayweather, try to tear him down with body shots, but it’s going to be hard for [anyone] to catch him clean to the body. He just covers up so well. He rolls with the shot and comes back with the perfect counter shot. It’s just incredible.”

Mayweather aging: “He probably is slowing down just a little bit, but even on his off day, he’ll beat any fighter out there. The guy is just a talented fighter. That’s why he’s so confident with what he does and what he can do. He doesn’t see himself losing; I don’t see him losing. I believe this is still his time.

Guerrero should box: “Instead of fighting like a straight up Mexican fighter, if he can box him with that southpaw stance, he can [give him problems]. I would go with Pernell Whitaker over Mayweather, but Guerrero’s not that type of fighter.

“You can’t be aggressive against a guy like Mayweather, who knows how to counter. It’s a mistake to try to outhustle him, out-macho him. It’s not about being macho or strong or anything like that; you have to be smart in there, use speed and intelligence.” 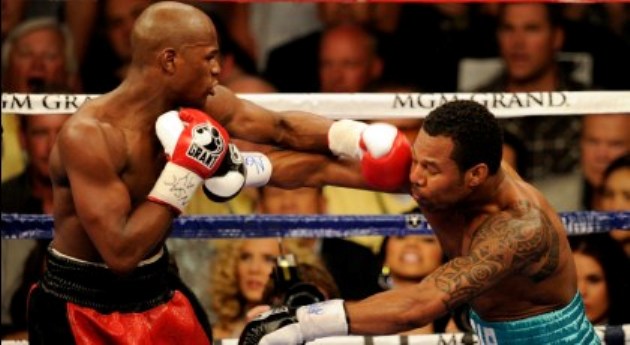 Mayweather vs. Guerrero: “I think Mayweather might be a little too good, but then again he might be ripe for the picking. He hasn’t fought in a while, his timing might be off, he’s fighting a southpaw. Guerrero has a good, strong left hand; he has a deceptive left hand. I sparred Guerrero for a month when he was fighting at lightweight and said, ‘Wow, he’s got a little power in his left hand.’ He had a good little left hand when he was a lightweight; he might be hitting a little harder at welterweight.”

Mayweather strengths: “Mayweather is real sharp, is real fast and is so confident in his skills. He’s a very good technician with both hands. Mayweather has deceptively good power. He throws good shots, he punches pretty good. He gets the rap of not really being a good puncher but he has a good stinging shot. I’d rate his and Canelo’s power about the same.”

Mayweather vulnerabilities: “Usually southpaws give him problems, because he leads with that left hand. A pure boxer, a guy that will make it more of a boring fight, will probably give Mayweather problems because Mayweather would have to become the aggressor more instead of the counterpuncher. Somebody like a Paul Williams would have given him a lot of problems, when he was at welterweight, because he’s tall and a southpaw and a rangy boxer. He would have given anybody problems.” 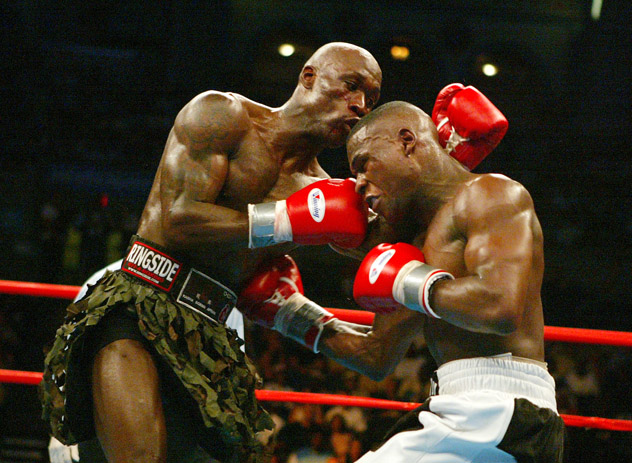 Mayweather vs. Guerrero: “From the research I’ve done on [Guerrero], he’s not a power puncher; he’s just an aggressive fighter. He doesn’t have nothing to hurt Floyd, so it’s not going to be a dangerous fight for Floyd. Guerrero’s just a straightforward fighter who’s going to throw a lot of punches and try to overwhelm you and break you down. [Floyd’s] gonna break him down. I have it going 11 rounds.”

Mayweather aging: “He’s the same cat. He’s gotten better over the years as he’s put on weight, and from the looks of it he’s put on some punching power. At 140, he couldn’t punch; he couldn’t hurt me.”

Mayweather strengths: “He’s an all-around fighter, inside and outside. If you look at the Zab Judah fight, Zab was winning the first five rounds. [Mayweather] makes every adjustment you bring to the table.”

Mayweather vulnerabilities: “Canelo Alvarez’s style – a bigger, stronger guy – will give Floyd problems. I would give Canelo the first six rounds. It’s the ending part of the fight where Floyd starts picking it up and breaking you down.

Being in the ring with Mayweather: “I knew I hurt him, that’s why he went into the ropes and started using his shoulder, fighting in a shield. He can take a punch and he proved it.” 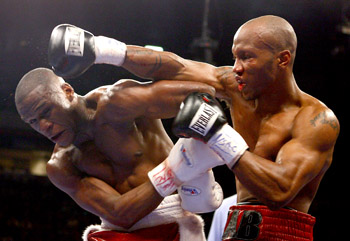 Being able to give Mayweather problems: “I think that my speed gave him problems. He didn’t anticipate me being that fast. For the first six rounds, I was quicker, I hit harder. I even knocked him down (referee Richard Steele missed Mayweather’s glove touching the canvas). He saw myself getting tired and took advantage of that. He was in dynamite shape and took advantage of his condition over my condition.”

Mayweather vulnerabilities: “There’s a lot of fighters out there that are really good, but when they face a different style they get thrown off for a while. I think Mayweather at times gets thrown off because he doesn’t fight southpaws as much.”

Mayweather vs. Guerrero: “If Mayweather comes in and dictates and dominates as he usually does from Round 1, then it’s another Mayweather assassination. We’ve never seen him off his A-game. Why would he not be on his A-game now? [Guerrero] doesn’t match up in speed with Mayweather, but he has a power shot and a pressure shot. How he appears physically and mentally will dictate the terms of this fight.”

Mayweather aging: “He got hit a lot in the [Miguel Cotto] fight, but I don’t think he’s slowed down any. He had a year off from boxing.

Best game plan vs. Mayweather: “What’s the best way to beat a counterpuncher? Throw a great volume of punches; never have a break in between. You have to throw non-stop punches. [Guerrero] needs to throw 150-plus punches a round, for 12 rounds straight. He has to be sharp. He has to be mentally [prepared so] when [Mayweather] slips a punch and comes back with a counter, he’s ready.”

This piece originally appeared in the June 2013 issue of THE RING Magazine. The current issue – previewing the May 2 fight – is on newsstands now. Don’t know where to find a newsstand near you that sells it? Click here. To subscribe ÔÇö both to the print and digital versions ÔÇö click here. You can also purchase the current issue on that page.

READ: Manny Pacquiao — The substance behind the stare (From THE RING Magazine)

READ: Floyd Mayweather — That’s how he (shoulder) rolls (From THE RING Magazine)