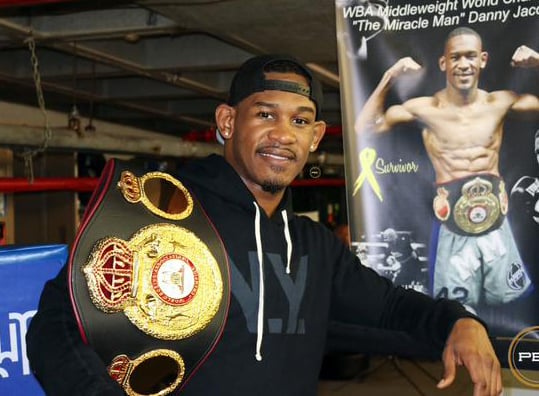 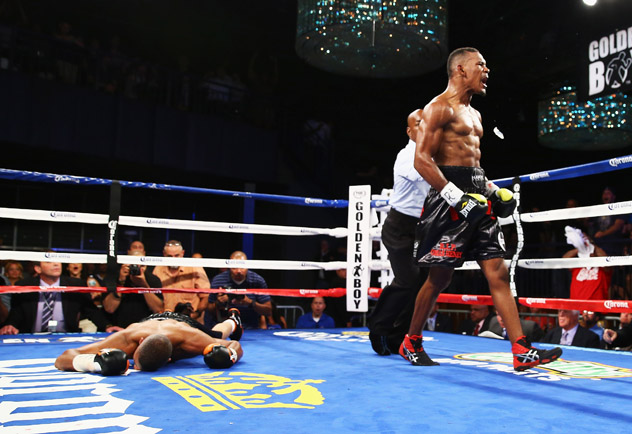 CHICAGO – Middleweight standout Daniel Jacobs saw the Spike promotional documentary that focused on him and Anthony Dirrell’s journey with cancer, and had a major qualm with what his opponent, Caleb Truax, said during it.

By now, Jacobs’ story is one that boxing fans are all too familiar with. When Jacobs was 23, he felt pain in his legs and was soon diagnosed with osteosarcoma, a cancerous tumor that formed around his spine. In May 2011, he had surgery to have the tumor removed.

But what he thinks Truax and those watching might not realize is just how talented Jacobs can be.

Jacobs makes the first defense of his WBA “regular” middleweight title Friday at the UIC Pavilion against Truax as part of the Primer Boxing Champions series on Spike. [Editor’s note: THE RING only recognizes Gennady Golovkin as the WBA’s 160-pound champion.]

“I think this fight is what it is on paper ÔÇö contender versus champion,” Jacobs said. “I’m looking forward to displaying that to 100 percent why I’m champion and he’s contender. He’s never seen speed like this before.

“He’s never faced a guy who has moved, has a jab and has power,” he added. “When you think about sheer gifted talent, that’s where the difference lies.”

It’s talent that Jacobs is rediscovering, but he says he’s now at a point where he feels back. The 27-year-old fighter said he felt back when he fought contender Giovanni Lorenzo, being the first boxer to knockout Lorenzo, doing it in the third round in August 2013.

Jacobs has had two fights since Lorenzo, but has been off since August 2014, when he scored a fifth-round stoppage over Jarrod Fletcher.

“It took time just to get my nerves back because when you have neurological damage like that, it takes a little while to get back 100 percent,” Jacobs said. “My mental side has been ready. It was something that was stripped away from me so I’ve always wanted it.

Jacobs’ situation is also a second opportunity of proving himself on the world stage. In his first title opportunity on July 31, 2010, former middleweight contender Dmitry Pirog upset Jacobs with a fifth-round stoppage.

Jacobs said he has learned from that situation.

“You have to be mentally be 100 percent,” Jacobs said. “I wasn’t mentally prepared like I should have been. I was 100 percent in the best shape of my life at that point, but mentally I was in a much worse shape. When you are a champion, it just makes you work that much harder and makes you focus on (defending your title).”

Jacobs’ second chances, however, doesn’t stop Truax from thinking he can pull the upset. The Minnesota native has friends and family driving to the Windy City with hopes he can capture his first world title.

“He’s an athletic fighter, who is talented and got some speed ÔÇª but he’s not a fighter who likes to fight on the inside,” Truax said. “I’m going to get inside and I don think he’s used to that. I don’t think he’s comfortable there.”

Truax is also in the backseat of the promotion, which has caught him off guard. The breaking point was when he would log into Twitter only to get notifications about “the Miracle Man” from PBC, Spike TV and him being tagged over and over.

“You don’t got to put me on there, and I don’t have to see all that stuff,” Truax said.

Surprisingly, or maybe unsurprisingly given his enthusiasm about the subject, Jacobs said he doesn’t get tired of talking about his story.

“It’s one of those feel good stories for me,” Jacobs said. “It’s like wanting to preach the gospel. There’s not a moment that doesn’t go by where a person doesn’t want to talk about their story. For me, it was about my faith in God and the ability to overcome what I did.”

Asked about the hardest part of his career since being healthy, Jacobs paused. He took a moment to think and then started to discuss “waiting for his turn.”

Jacobs heard about potentially fighting in January, February and then March. When Truax-Jacobs was first reported, the initial target date was two weeks earlier on April 7.

There was also the development of his career too, which continues Friday.

“Now it’s about testing yourself and seeing if you have the right style, seeing if you can do what you want to do inside the ring,” Jacobs said. “It took a couple fights and now I’m a world champion.

“With this professional game that we’re doing, we don’t really know if we can have a fast schedule or if we’re fighting six or seven months down the road. It’s just one of those things where you have to be prepared.”